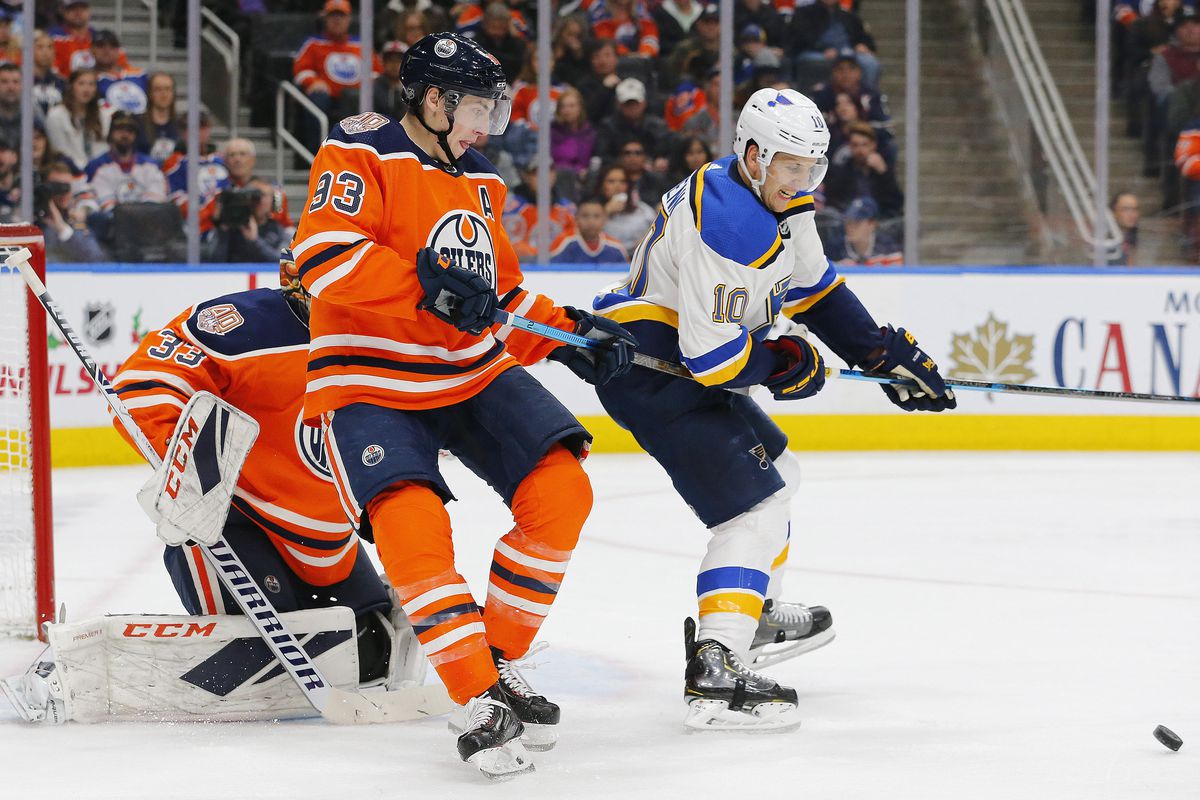 The defending Stanley Cup Champions are coming to town. The Edmonton Oilers will get their first shot at the St. Louis Blues tonight at Rogers Place, continuing a three-game home stand. The Oilers are riding a three-game point streak right now, having gone 2-0-1 in their last three games.

This is the first of three meetings between the sides this season. They’ll meet again on December 18th in St. Louis, and then conclude their slate on January 31st in Edmonton.

Mike Smith gets the start for the Oilers, while Jake Allen gets the nod for the Blues.

Edmonton: Show up on time. The Oilers dominated the final 30 minutes on Monday and grabbed a point, but they had to play from behind because of a lazy first half of the hockey game. After Dave Tippett took to the media to criticize his team for a sluggish start, I expect the Oilers to come out ready tonight. They have to know that this is a measuring stick game.

St. Louis: Clog the neutral zone. The Blues are a bigger, physical team that plays a playoff style every night. If they take a page out of the Coyotes book and play Edmonton tight in the neutral zone, they should limit the chances against and be able to control the pace of play.

Edmonton: Sam Gagner got the push up to the top line on Monday night, and is expected to start there tonight. He played his best game of the season against the Coyotes, and I thought the top line took off when he got promoted. It could be a big night for Gagner if they can build on that chemistry.

St. Louis: With Vladimir Tarasenko on the shelf long-term, Robert Thomas has been lifted to the top line in St. Louis. The 2017 first round pick has immense talent and is emerging as a strong top six option. He’s got the potential to be the breakout player of the year now that he has this kind of opportunity. He’s worth your attention.

Tomas Jurco and Brandon Manning are back in tonight for the Oilers. Markus Granlund and Joel Persson will come out, while Joakim Nygard and Josh Archibald are still injured. Dave Tippett confirmed Tuesday that both are close to returning. Riley Sheahan will miss his third consecutive game.

The St. Louis Blues will be without star Vladimir Tarasenko for the majority of the regular season. That’s a huge loss. Other than that, the only major change from a season ago is the addition of defenseman Justin Faulk, acquired from Carolina in training camp.

Secondary scoring has finally become a thing for the Oilers. They’ve gotten at least one goal from the bottom six forward group in each of the last three games. In that span, they’ve collected five of a possible six points. See what happens when the big guns get some actual help? That trend will need to continue tonight.

The Oilers are coming off of their first loss of the season when they score the game’s first goal. Connor McDavid scored a beauty to open the affair on Monday, but Arizona ended up taking a 3-2 overtime decision. The Oilers are 7-0-1 when scoring first. They’ve lost two games in a row at home for the first time this season.

Expecting a lot of shots on goal tonight? Don’t. The Oilers and Blues are two of the worst teams in the league at getting shots on targets. The Blues rank 28th in shots per game, while the Oilers rank 29th.