5 rational thoughts about the Celtics’ comfortable win in Charlotte 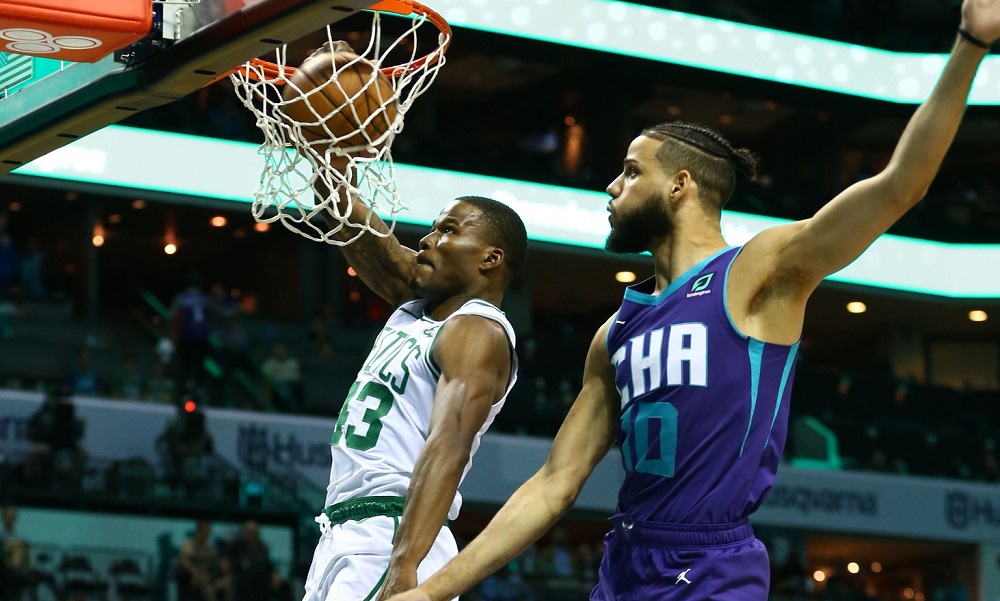 5 rational thoughts about the Celtics’ comfortable win in Charlotte

Five points about last night’s road win over the Hornets, where the Celtics took the lead midway in the first quarter and never looked back.

We learned last night that Charlotte fans really, truly love Kemba Walker. With good reason: he’s the franchise’s all-time leader in every significant stat category and a genuine good guy. Kemba was moved by the tribute video, and perhaps a bit nervous – he was 0-6 in the first half. But he got it together in the third quarter with 11 points (3-5 from the arc) and 4 assists, helping the Celtics pull away.

Even on his special night, Kemba made sure to put the team first.

"I didn't want to make this about me. I wanted to make this about us," Kemba Walker tells @tvabby. "I knew there was all the talk about me coming back and things of that nature, but the most important thing to me tonight was to win.

That’s a high-character individual. After last year’s discord and discontent, we couldn’t have asked for a better person to lead this season of healing.

On the other side, Terry Rozier – the man Kemba was traded for – had a game to forget.

I really thought Scary Terry would show up against his former team, but the only people he frightened were the Charlotte fans. They probably recoiled at Rozier’s hideous shot chart (1 make, 10 misses), not to mention his 4 turnovers and plus/minus of negative-14.

Rozier had an opportunity to earn Hornets’ fans trust and help them move on from Kemba, but he wasted it. I still expect he’ll do better on his next chance, December 22 in Boston.

At 23.6 points per game, the Celtics rank dead last in the NBA for bench scoring. That’s what happens when your second unit includes six players in their first or second years.

Last night, the Hornets bench outscored the Cs bench 49-34. That’s despite the Boston subs getting more playing time than usual (the starters basically sat out the garbage-time 4th quarter).

The Celtics’ second team actually played well overall, but they just couldn’t put the ball through the hoop. They were a collective 12-31 from the field, and four of the eight subs scored zero. And that’s typical – the Cs bench is hitting just 39.5% this season.

Maybe there’s hope, however. Javonte Green got his first significant playing time and scored 12 points in 13 minutes on 5-9 shooting. If nothing else, Green was an obvious upgrade from the offensively challenged Semi Ojeleye. Let’s see who gets on the court first next time.

Javonte Green (@2Xtremebounce) making his case for more minutes with 12-point performance last night. He can get to the rim, that's for sure. Also, super athletic.

For some reason, this game is full of plays that might have resulted in forced shots last year, but now the ball is being moved for better looks

The Celtics had a season-high 29 assists on their 40 baskets (on 93 shots), and no individual had more than 6 dimes. That’s some sharing, folks, and a team can never go wrong when the ball doesn’t stick.

The rook is beloved in Charlotte.

Grant Williams has quite the hometown section here to support him tonight!@Grant2Will | @ProvidenceDay | #Celtics | #Hornets pic.twitter.com/tq2kP81Wzx

Unfortunately for his cheering section, Grant went scoreless in 15 minutes, including being blocked on a dunk attempt. He still made winning plays, however.

Grant Williams had a game-high net rating of 42 last night in 15 minutes. His defensive rating of 63.9 was his best thus far through seven games.

After destroying the Cavs on Tuesday, Gordon Hayward struck again last night with 20 points (14 in the first quarter) on 9-16 shooting, plus team-highs of 10 boards and 6 assists. He’s doing it all now.

…and no one else.

These are amazing numbers, although few people seem to have noticed. Gordo gets nowhere near the hype as the others on that list.

What it means, though, is that the Celtics need to be taken seriously. KOC knows it.

Celtics are one move away from being on the same level as Bucks and Sixers. Unsure that move is out there, but Boston has 1sts from Grizz & Bucks plus its own assets to use. Hayward being back, Tatum's progress and chemistry with Kemba closes the gap but they need one more piece.