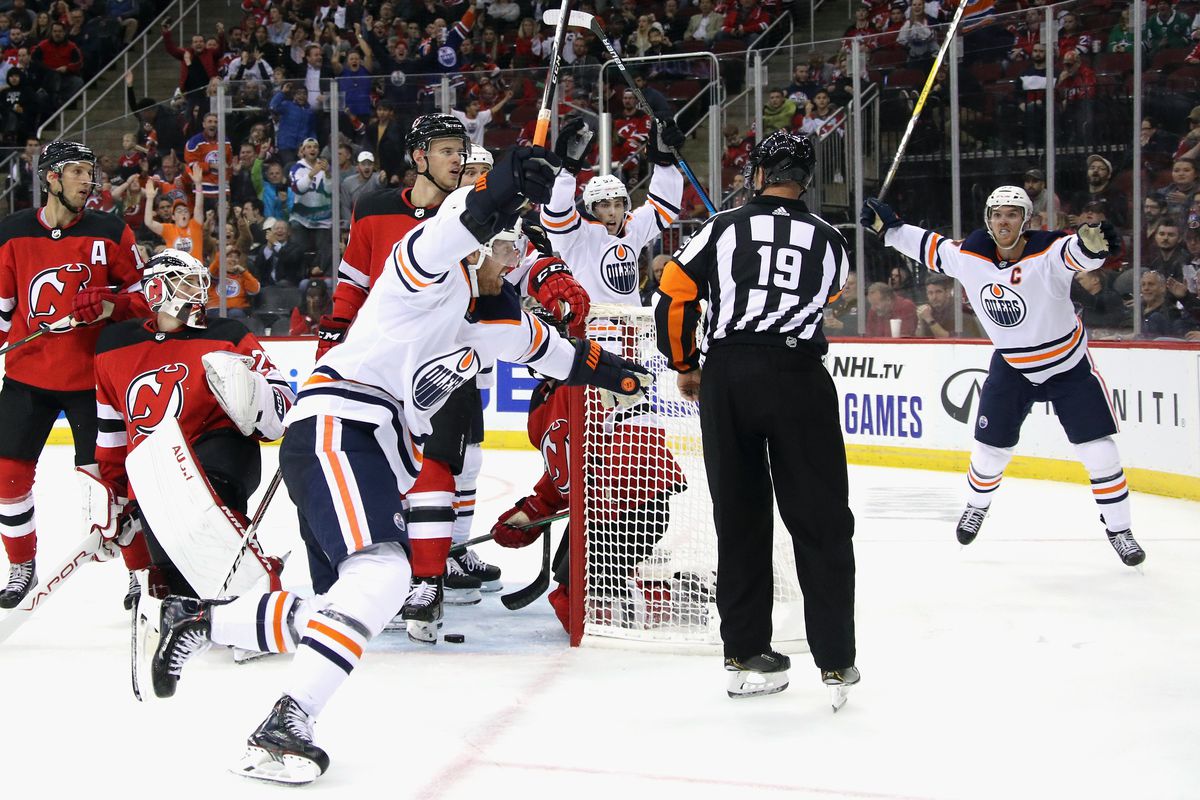 The Edmonton Oilers close out a three-game home stand tonight in desperate need of a victory. The club is 0-1-1 thus far, dropping a 3-2 overtime decision to Arizona on Monday and a 5-2 defeat to St. Louis on Wednesday. Outside of the first half of the Arizona game, the Oilers have been the better five-on-five team in both games.

Tonight, they conclude the season series with the weary Devils, who played last night in Calgary. It’s Taylor Hall’s first game back in Edmonton since November, 2017.

Mikko Koskinen gets the start for the Oilers, while Cory Schneider gets the nod for the Devils.

Edmonton: Stop taking stupid penalties. The Oilers, in both the first and second period on Wednesday, came out and dictated the pace against the defending champions. In both cases, they took stupid penalties to put the Blues up a skater. St. Louis scored on both powerplay opportunities. You can’t gift teams man advantages and goals. Tighten that up ASAP.

New Jersey: The secret may just be out for shutting down the Oiler attack. Clog up the middle and force the Oil to dump and chase. It’s what both the Coyotes and Blues did so well the last two games. That’s New Jersey’s key to victory tonight. Can they do it on the second half of a back-to-back?

Edmonton: Zack Kassian won his job on the top line back on Wednesday night. He played well in that spot, and scored a key goal to make it a one goal game late. Kassian plays hard, has enough skill to finish and has chemistry with both McDavid and Draisaitl. Back in his usual spot, he’s poised for a big night.

New Jersey: This is just Taylor Hall’s third game back in Edmonton as a member of the Devils. It’s also very likely his last. Hall is a pending free agent and odds are he is dealt by the trade deadline. Who knows, next time Hall plays in Rogers Place he could be an Oiler. I expect he puts on a show tonight.

The Oilers placed Tomas Jurco on waivers for the purpose of assignment yesterday. They also assigned Colby Cave to Bakersfield. That means Josh Archibald will be activated from IR and Riley Sheahan will return to the lineup. Joakim Nygard is also close to a return. Sam Gagner is expected to be scratched along with Brandon Manning.

The Devils are playing much better hockey than last month when these two teams met. The wins aren’t coming frequently enough, however. Goaltending continues to sink the Devils. Matt Tennyson replaces Connor Carrick on the blueline.

The Oilers have had quite the run of success against the Metro Division this season. They are 7-0-0 against Metro opponents, including a shootout victory over the Devils in Newark last month. The only team Edmonton hasn’t beaten? Carolina, but they’ve yet to play the Hurricanes.

The third period could be key tonight. The Oilers have 19 third period goals this season, while the Devils have scored just nine. New Jersey has allowed 20 goals in the third this season. Something to keep an eye on if the game is close later tonight.

Edmonton’s penalty kill gave up two goals on Wednesday night. The Devils could be exactly what the doctor ordered to get back on track. They are 1-for-21 on the powerplay on the road this season. Their 4.8% conversion percentage is the worst in the NHL.