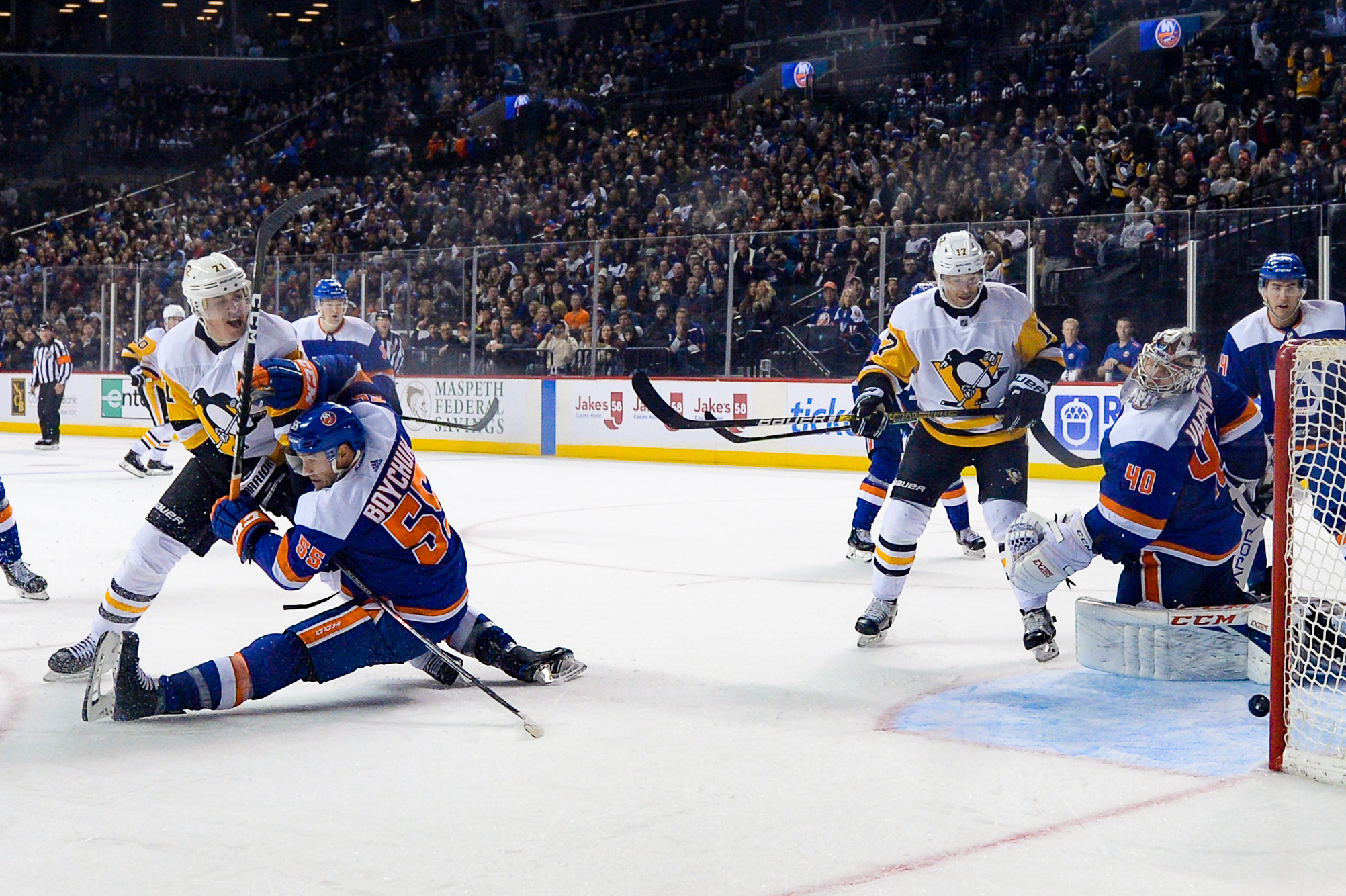 NEW YORK – All good things must come to an end, and that was the case on Thursday night.

The Islanders uncharacteristically allowed a three-goal lead slip away in the third period on their way to a 4-3 overtime loss to the Pittsburgh Penguins. Bryan Rust scored the game-winning goal for the Penguins with 1:35 left in the extra period.

It was a span of 7:10 early in the third that wiped out the Islanders’ advantage. Cal Clutterbuck, Casey Cizikas and Adam Pelech scored in the loss for the Islanders

Below are three takeaways from Thursday night.

Uncharacteristic play in the third

Usually, the Islanders are rock solid with a three-goal lead. In fact, they hadn’t lost a game all season when they scored at least three goals in a game… That was until Thursday night.

The Islanders appeared to take their foot off the pedal in the third period, which allowed the Penguins to rally quickly in the final 20 minutes. Pittsburgh outshot the Islanders 11-6 in the third and outplayed New York overall.

“We weren’t quite aggressive enough to start the third,” Ryan Pulock said. “They were able to find one and gain some momentum. They just continued to put it on us for the first 10 minutes.”

Through the first seven minutes of the third period, the Islanders’ fancy stat numbers were not good. They were out-attempted 9-1 and the Penguins held the edge in high danger chances 4-0, according to Lighthouse Hockey’s Carey Haber.

“We were sort of hanging on,” Islanders coach Barry Trotz said. “We were out-chanced 10-1 probably in the third period. We were hanging on. That’s not like us. Usually, we’re pretty good that way. … I didn’t have guys enough going up front today. I thought we only had a couple lines that were going.”

This won’t become a trend

In case you were wondering if this would become a trend for the Islanders, it won’t. Trotz was emphatic about that after the loss when he was asked about the team’s low number of losses when scoring three or more goals in a game.

“It won’t be a trend,” Trotz said matter of factly.

The Islanders’ success when scoring at least three times in a game has been unflinching this season. The Islanders had been 10-0-0 this year when scoring that many and before last night they were 42-2-2 in the Trotz era.

And while the loss was an ugly way to end a pretty historic stretch for the Islanders, the players seemed to realize that this wasn’t a game that you throw away. Rather it was one they needed to learn from going forward

“The main takeaway is staying aggressive on teams, especially when we have a two or three-goal lead like that going into the third period,” Pelech said. “We have to keep the pressure on them. That way we’ll spend more time in their end instead of defending like we did in the third there.”

Murray’s save turned the tide of the game

The Islanders obviously allowed a goal pretty quickly into the third period on Thursday night, but it was Matt Murray’s save on Anthony Beauvillier that really seemed to swing the momentum in Pittsburgh’s favor. Murray made an incredible skate save on a backhander from Beauvillier that looked destined for the back of the net.

Instead, the Penguins were able to quickly head the other way and Bryan Rust beat Semyon Varlamov to make it a one-goal game.

“If we score it’s probably game, set, match,” Trotz said. “That’s what hockey is. it’s a game of momentums. You get a big save, you go down the other way or our goalies have kept us in games so we can go get points. Murray did that today on that save and they got a little momentum.”

It was certainly the way the Penguins felt afterward in their dressing room.

“It was huge,” Rust said. “If that doesn’t happen I don’t think the game goes the way it did. He’s been a big part of us. Making saves like that is part of his game.”