Minnesota Resilient in 4-3 Victory Over Arizona 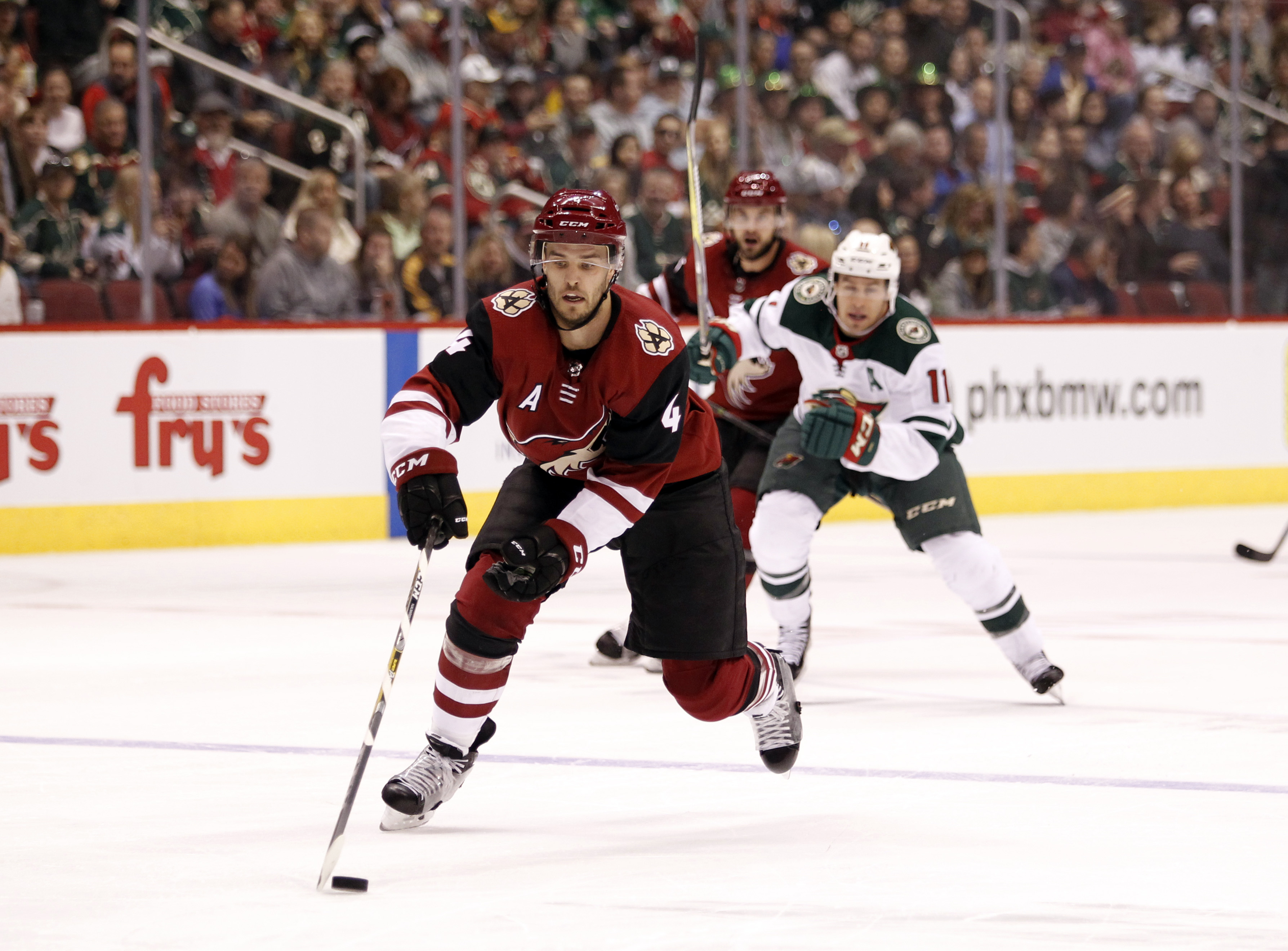 Minnesota Resilient in 4-3 Victory Over Arizona

Snow’s on the ground, freezing temperatures are in full effect and it really begins to feel like its hockey season.  That’s for us folks living back in the upper Midwest, but the Minnesota Wild are enjoying the moderate temperatures of the southwestern United States.  The Wild are starting to show signs their offense is starting to turn around but they still find themselves at the bottom of the Central Division.

The Arizona Coyotes may not have a super potent offense, but they seem to be on their way from becoming a project team to one that is a post-season contender.  The Coyotes do it with great defense and goaltending.  Can the Wild offense continue their ascension against a stingy Arizona squad?

1st Period Thoughts:  The Wild did not start out well as some questionable decisions with the puck as Ryan Suter gave up a turnover that resulted in an early scoring chance for the Coyotes. Arizona would strike first as Michael Grabner turned his skate to redirect an Aaron Ness shot on goal that beat Devan Dubnyk.  1-0 Arizona.  The Wild would try to answer back as the Coyotes were not giving Minnesota much time and space with the puck.  Minnesota’s struggles would continue Arizona quickly transitioned off a turnover Nick Schmaltz sent a pass to the middle of the ice where Jake Chychrun stepped into a slap shot from the high slot that beat Dubnyk cleanly.  2-0 Arizona.  Minnesota would try to catch the Coyotes in transition as Arizona coughed up the puck giving the Wild a 2-on-1, but Jason Zucker‘s shot was denied by Darcy Kuemper.  Moments later it was Zucker on another breakaway after a turnover in the neutral zone but his wrist shot was stopped by Kuemper who looked calm and poised in the Coyotes’ crease.  The Coyotes’ defense was making it difficult for the Wild to connect even on simple passes as you could tell the team was rather frustrated even this early into the game.  Mikko Koivu would get tagged with a tripping call as Arizona’s hustle drew a penalty.  The Coyotes nearly added to their lead on a quick shot off the faceoff that Dubnyk struggled to keep out as he battled it out of air and the puck hit the post and luckily stayed out.  Minnesota would feel like it escaped from the period to only being down 2-0 after what was an ugly 1st period effort.

2nd Period Thoughts:  The Wild would kill off the remainder of the Coyotes power play to start the 2nd period.  Minnesota had some other good chances from in close as Joel Eriksson Ek hammered away at the biscuit in the crease but Kuemper was able to cover it up for a whistle.  Eriksson Ek’s hustle would draw a hooking penalty as he charged into the corner for a loose puck in the Arizona end.  Minnesota would cash in on the power play as Koivu would bury a rebound from just above the right faceoff dot after a point shot by Jared Spurgeon caused a little havoc.  2-1 Coyotes.  The goal seemed to give the Wild a little bit of energy and they went to work in search of the equalizer.  As Minnesota was being more aggressive, the Coyotes would force a turnover and race in a 2-on-1 between Brad Richardson and Vinny Hinostroza but Dubnyk would make a big save to keep the Wild within one.  The Coyotes would start to raise their tempo a bit and the Wild struggled to stay with the speedy Arizona squad.  Arizona would extend their lead as Hinostroza fired a shot that beat Dubnyk who had a pretty good view of the shot even if it did come through the legs of Matt Dumba.  3-1 Coyotes as Dubnyk didn’t even move as the shot found a window right over his shoulder.  Arizona continued to attack as Clayton Keller found a little room and he’d rip a shot Dubnyk fought off.  A few minutes later, it was Brad Hunt firing a shot on goal that Kuemper struggled with and Kevin Fiala played the puck from his skate to his stick and he buried it.  3-2 Coyotes.  The Coyotes would try to answer back as Carl Soderberg had a chance off the rush that Dubnyk stopped and then denied his rebound attempt as well which occurred just moments after Ryan Donato nearly tied the game for the Wild.  The Wild tried to work pucks deep and take advantage of the Coyotes’ smaller and lighter defensive corps but winning the race to the loose pucks was arguably more important than the physical battle along the wall.  Hinostroza would ring a shot off the goal post and the Wild would counter attack as Zucker got Kuemper to commit and he moved behind the goal and swung a pass out to the point to Dumba who blistered a one-timer by the Coyotes’ goalie.  3-3 game to stunned silence from the Arizona crowd.  Minnesota continued to attack in search of the go-ahead tally but Kuemper made the stop to keep the game knotted at 3 goals apiece heading into the 2nd intermission.

3rd Period Thoughts:  The period started with a cautious pace as one may expect in a tie game.  Arizona seemed patient, waiting for Minnesota to make a mistake and then attack in transition.  The Wild was sending any shot it could on goal to hope for some kind of lucky goal against Kuemper.  The Wild’s persistence would pay off as  Spurgeon carried the puck down beneath the goal line and sent it out front to Ryan Hartman who pounced on the puck and his shot glanced off a skate and in.  4-3 Wild to more stunned silence from the home crowd.  Minnesota now focused itself on playing smart and working pucks deep and trying to force the Coyotes to spend precious time defending in its own end.  Carson Soucy would deliver a bone-rattling open ice hit that drew the ire of the Coyotes bench.  Hartman would take a foolish cross-checking penalty that gave Arizona its best chance at tying up the game.  Minnesota’s penalty killers did a nice job of giving the Coyotes’ puck carriers little in the way of time and space.  The Coyotes were forced to settle for shots from the perimeter as a point shot by Alex Goligoski was redirected by Christian Dvorak that was stopped by Dubnyk to give Minnesota a big penalty kill.  The Coyotes seemed to have better legs down the stretch as the Wild had shortened its bench a bit.  Minnesota was trying to apply token offensive pressure as Zucker fired a shot, short side that Kuemper held onto for a whistle.  The minutes slowly went by as the Wild tried to lock everything down and limit the Coyotes’ scoring chances.  A Goligoski shot was redirected on goal that was denied by a nice leg save by Dubnyk.  Dubnyk continued to come up with some big stops in the last few minutes of regulation as he got good help from his forward to work the puck out of the zone.  Eric Staal would take a holding penalty with just 12 seconds left which gave the Coyotes one last chance with a 6-on-4 power play.  It didn’t matter as the Wild shut the door in the final seconds of the period to come away with a 4-3 victory.

D – Filip Johansson (Leksand IF, SHL) ~ since Leksand was promoted to Sweden’s top league, its been tough going and Johansson is starting to show signs he’s more comfortable as he registered his 2nd goal of the season.  Johansson has 2 goals, 3 points, 6 PIM’s and is a -3 in 14 games.

D – Simon Johansson (Djugardens, SHL) ~ Djugardens is one of the SHL’s powerhouse teams and are off to another strong start and Simon is more of a role player.  He has a goal, 5 points. 8 PIM’s and is a +5 in 15 games.

LW – Jack McBain (Boston College, H-East) ~ the sophomore power forward had a goal and an assist on 4 shots on in the Eagles’ 6-0 rout of UConn on Friday.  On Saturday, McBain had another helper in Boston College’s 5-1 series sweep over the Huskies.  McBain has a goal, 6 points, 2 PIM’s and is an ‘even’ rating in 8 games.

D – Marshall Warren (Boston College, H-East) ~ the freshman defenseman played on the Eagles’ top pairing and had an assist on 1 shot in Boston College’s 6-0 win over UConn last night.  Warren has a goal, 3 points, 8 PIM’s and is a +3 in 8 games.

C – Sam Hentges (St. Cloud State, NCHC) ~ the sophomore continues his strong start by registering another assist as St. Cloud ties Northern Michigan 3-3 on Friday.  He added another goal and two assists on Saturday’s 5-4 OT win over the Wildcasts.  Hentges leads the Huskies in scoring with 6 goals, 15 points, 2 PIM’s and is -1 in 7 games.

RW – Nick Swaney (Minnesota-Duluth, NCHC) ~ the former Lakeville South star had an assist on 5 shots in the Bulldogs 3-3 tie with Denver.  The next night, he had two more helpers in Minnesota-Duluth’s 5-2 win over the Pioneers.   Swaney has 2 goals, 7 points, 2 PIM’s and is a -2 in 8 games.

F – Nikita Nesterenko (Chilliwack, BCHL) ~ the Boston College-commit had a goal and an assist last night in Chilliwack’s 6-5 loss to Langley last night.  Nesterenko has 7 goals, 19 points, 15 PIM’s in 21 games.