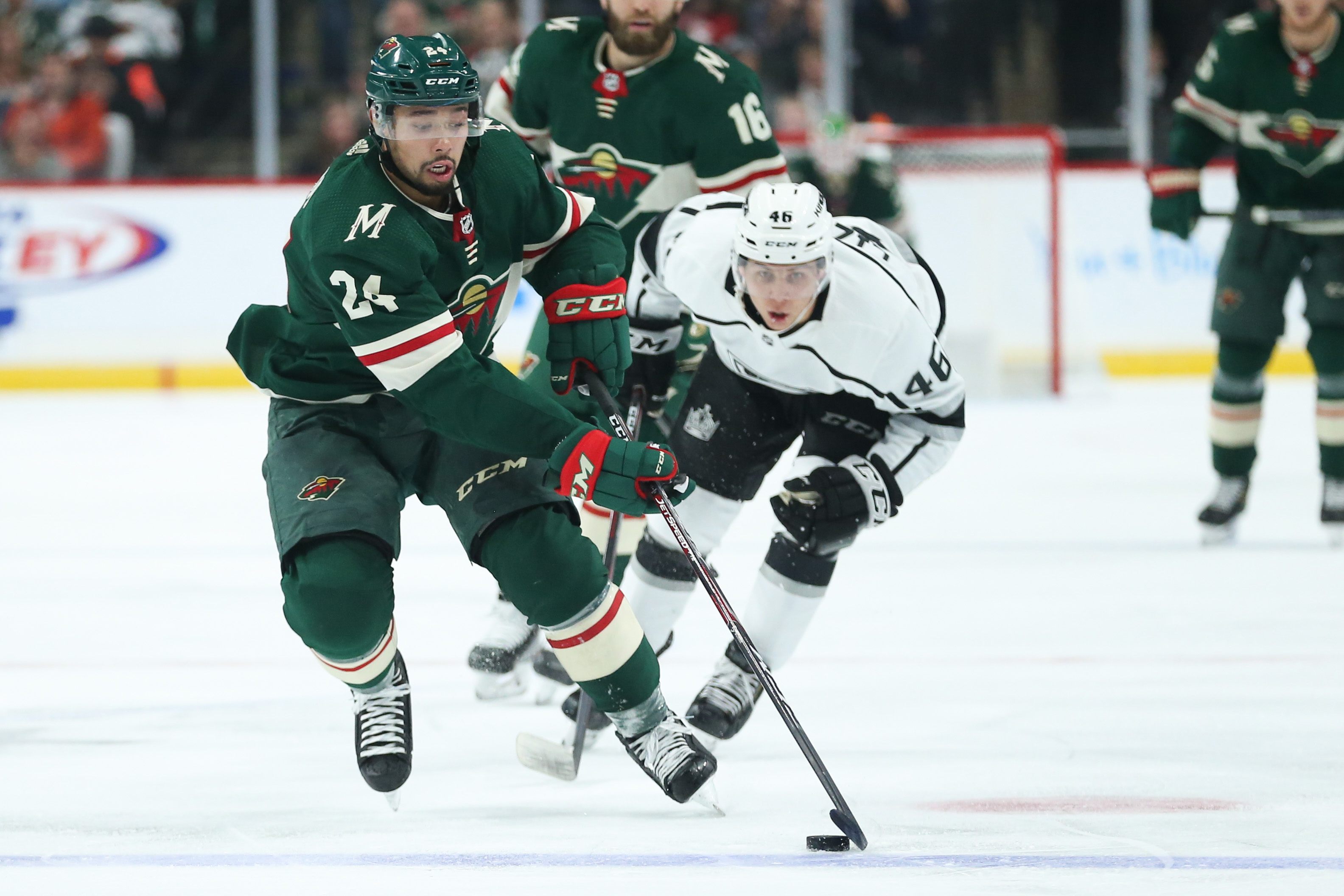 When the Wild gave up two goals in relatively quick succession in their game against Arizona, I think it was only natural to believe the wheels were coming off early in the desert.  To Minnesota’s credit, they re-focused and then used the fact they were getting some trash talk from their former goaltender in Darcy Kuemper to be the catalyst to get angry and play harder.  At some point, the Wild need to be able to flip that switch without some outside force triggering it.  Minnesota has the chance to earn a 3rd victory in the last game of a 4-game road trip.

In many ways, the Los Angeles Kings are kind of the Wild’s Pacific-division doppleganger.  An older, expensive team that used to be a playoff regular is now struggling with faster and younger opponents.  Both teams sit at the bottom of their respective division standings and both will understand that if they want to climb out of the basement they’ll have to do so at the expense of the other.  Which team will want it more tonight?

1st Period Thoughts:  Both teams were not giving up much time and space in their respective ends of the ice.  Los Angeles’ Sean Walker would step into a slap shot from the point that Devan Dubnyk knocked down, but he was unable to cover up the rebound and as he tried to snow angle over the biscuit it was shoveled in by Anze Kopitar as Ryan Suter stood by watching it happen.  1-0 Kings.  A few minutes later, Kyle Clifford cross checked Ryan Hartman to the face giving the Wild its first power play of the game.  Minnesota was pretty nonchalant on the power play and were predictably ineffective as they struggled mightily just to get set up in the offensive zone.  Bad passes, poorly executed dump in’s made for easy turnovers and the Wild got nothing accomplished with the man advantage.  It was the kind of effort one would expect from a team with its mind not focused on the game in hand and instead thinking about going home.  Minnesota wanted to send shots on goal knowing Jonathan Quick‘s struggles this season, but to Quick’s credit he was trying to keep things simple by covering up any puck near his crease after the initial save instead of trying to move it.  Most of Minnesota’s shots were coming from the perimeter that were not giving Quick too much trouble.  The Joel Eriksson Ek, Luke Kunin and Jordan Greenway line would use its speed to apply pressure, generating a number of quality shots from in close that Quick had to be sharp to keep out of his net.  It was easily Minnesota’s best shift to this point in the game.  The Kings ’70’s Line’ went on the attack as Tyler Toffoli hammered a shot that Dubnyk struggled with as Jeff Carter lifted a backhander that rang off the crossbar and out.  A few minutes later Kevin Fiala had a puck just a few feet from the Kings’ crease but he was unable to get a shot off.  The line kept working and Zach Parise drew a penalty on Matt Roy.  Like the previous Wild power play, Minnesota would do just about nothing on the man advantage.  The Kings would spring Toffoli for a shorthanded breakaway that forced Dubnyk to bail them out with a big save.  Minnesota again struggled mightily to just work the puck into the offensive zone.  Even simple passes weren’t connecting and that was even before they crossed the red line.  Luke Kunin would finally get the first power play shot on goal that Quick steered aside with his shoulder.  Minnesota was probably fortunate to only be down 1-0 at this point in the game.

2nd Period Thoughts:  The period would start out fast and furious as Minnesota attempted to push the tempo early and had number of quality chances because of it as the Fiala, Parise, Mikko Koivu line caused some havoc and drew a penalty in the process.  Yet as has been the trend in the game, the power play worked to kill momentum and throw cold water on the hot start.  The Wild would try to work pucks deep but they were too slow to get to the dump in’s and the Kings would counter attack and Dubnyk was forced to make some clutch saves, including a partial breakaway for Los Angeles’ Austin Wagner.  Los Angeles would add to its lead as a point shot by Ben Hutton that partially deflected off traffic in front of Dubnyk that caused him to give up a rebound right to Jeff Carter who had an easy tap in goal.  2-0 Los Angeles.  The Wild probably wanted to answer back in their minds, but too many aimless area passes thwarted their attempts to start the rush towards the Kings end and Minnesota spent lots of time chasing the puck around the ice.  Minnesota would cut the Kings’ lead in half as Matt Dumba stepped into a slap shot that deflected partially of a Kings player and fluttered by Quick.  2-1 Kings.  The period would end with the Wild looking hungry, but do they have enough gas in the tank to take the game back in the 3rd?

3rd Period Thoughts:  Minnesota had an excellent scoring chance to start the period as Jared Spurgeon skated into the slot for a wicked shot that Quick fought off.  It was obvious that both teams understood the importance of the next goal in this game as they traded scoring chances with one another.  The Kings had a close one of their own as Alex Iafallo redirected a shot on Dubnyk that he knocked down and then dove to cover up the puck for a whistle.  Minnesota had another great chance as Spurgeon set up Mats Zuccarello for a close range chance but fire right into the mask of Quick.  The Kings forecheck was doing a fair job at keeping Minnesota hemmed in its own zone and the Wild’s overuse of area passes only helped Los Angeles prevent the Wild from breaking out.  The Fiala / Parise line would managed to put the Kings on their heels and Parise’s wrap around bid nearly cashed in as Fiala joined the Wild alternate captain in crashing the crease but Quick was somehow able to gather up the puck for a whistle.  The Kings would get their forecheck working again, forcing turnovers and keeping Minnesota bottled up and defending in their own end of the ice and wasting precious time the Wild could ill-afford to lose.  A late holding penalty on Jordan Greenway only made Minnesota’s challenge that much worse with little over 5 minutes left in the period.  The Kings took a few shots from the point, but then spent about half of the power play just killing time.  After the Wild killed off the penalty they’d try to pull Dubnyk for an extra attacker.  The Kings had most of the chances to score despite the fact the Wild had a 6-on-5 advantage in skaters.  Sean Walker would steal a puck in the neutral zone and he’d wire a shot into the open net to seal a 3-1 victory.

It was the ‘Day of the Dog’ in Des Moines as fans were encouraged to bring their dogs to the game as they highlighted the activities of the Humane Society and other dog loving groups.  With 4,955 and an unknown amount of dogs in attendance the Wild would strike early as Cody McLeod scored just a little past 2 minutes into the game.  Iowa would then hold off Ontario on a prolonged 5-on-3 power play and another power play shortly after that one to preserve its 1-goal lead.  Early in the 2nd period, Nico Sturm would score off the rush with a nice snipe by Cal Petersen.  Iowa would extend its lead with a shorthanded goal as Gerald Mayhew buried his team-leading 8th goal of the season.  The Wild would go into shut down mode in the 3rd period and would cruise to a 3-0 victory.  Mat Robson had 17 saves in his first shutout since turning pro.

LW – Adam Beckman (Spokane, WHL) ~ the skilled winger continues his strong start by chipping in two assists on 4 shots in Spokane’s 6-1 win over Kelowna on Saturday night.  Beckman has 7 goals, 27 points, 4 PIM’s and is a +15 in 17 games.

F – Nikita Nesterenko (Chilliwack, BCHL) ~ the Brooklyn, New York-native is starting to heat up as he had a goal and an assist in the Chiefs’ 4-1 win over the Prince George Spruce Kings on Saturday.  Nesterenko has 8 goals, 21 points, 15 PIM’s in 22 games.

RW – Ivan Lodnia (Niagara, OHL) ~ the Minnesota Wild sent the winger back to junior so he’d get more ice time and opportunity and so far he’s taking advantage of it as he had two goals (one of them a shorthanded goal and another on the power play) and three helpers in Niagara’s 5-4 win over Hamilton.  Lodnia has 7 goals, 13 points, 4 PIM’s and is a +2 in 9 games.

C – Damien Giroux (Saginaw, OHL) ~ the Spirit’s captain may not have had the most points in this game but he was clutch with the game-tying goal in a crazy 7-6 overtime victory over Windsor.  Giroux has 14 goals, 22 points, 8 PIM’s and is -7 in 19 games.