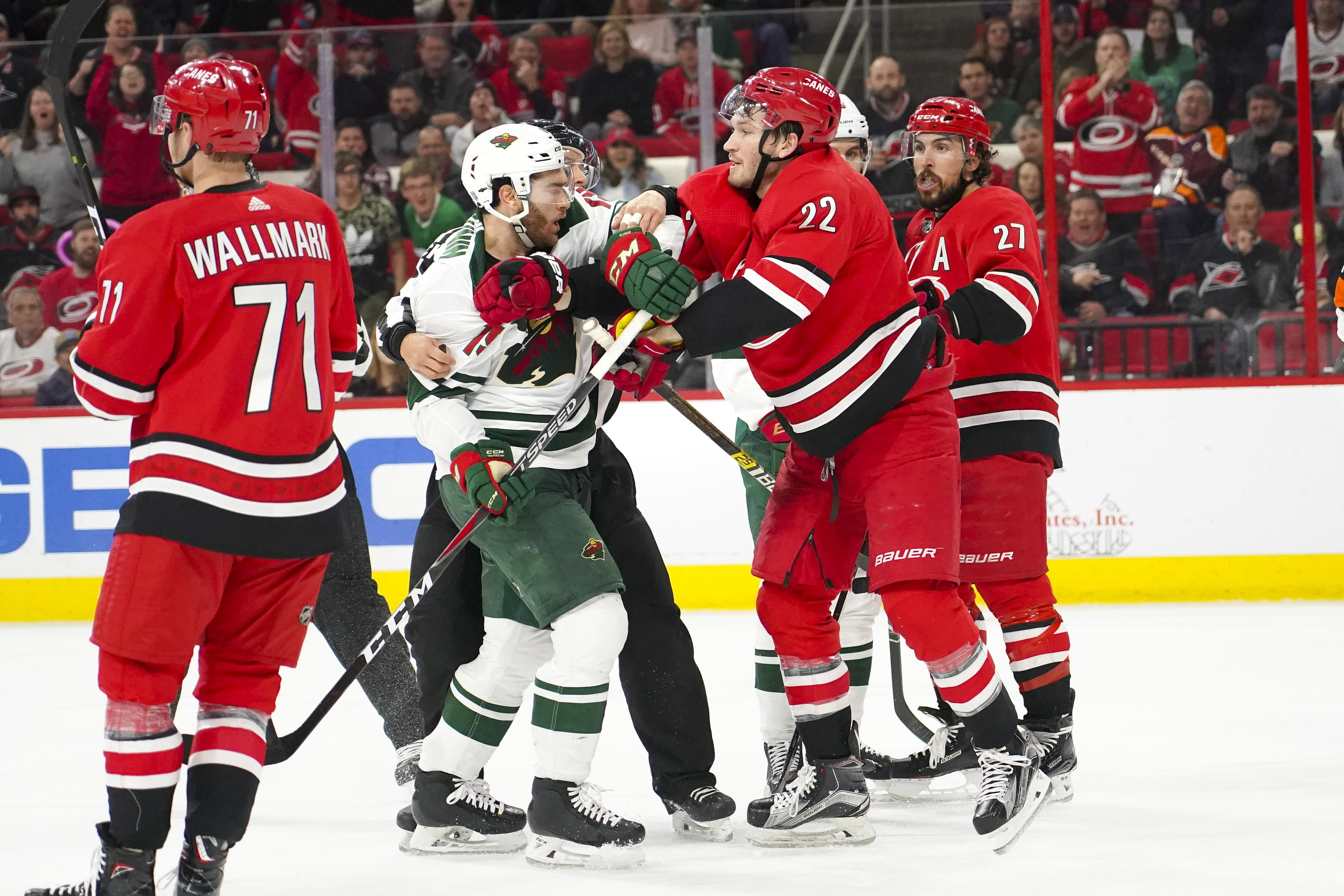 Routines help provide a sense of normalcy and predictability to any given day.  When those routines are disrupted, the day just doesn’t feel right.  You feel disorganized or unprepared.  The Minnesota Wild do not play many ‘matinee’ games, and in the past they’ve struggled in these situations which puts them outside of their normal routine.

The Carolina Hurricanes get ‘matinee’ games a lot.  Counting today’s matinee match up against the Wild, the Hurricanes have 8 more in their schedule.  Can Minnesota adjust its routine to be ready and prepared enough to earn another victory on home ice?

1st Period Thoughts:  Minnesota would have a great scoring chance in the opening seconds of the game as Brad Hunt came charging down the middle of the ice and he’d get off a quick shot that James Reimer tucked underneath his arm as players crashed into the Hurricanes’ net.  The Wild continued to apply pressure early, working the puck in the Carolina zone, but to the Hurricanes’ credit they kept Minnesota mostly to the perimeter.  Joel Eriksson Ek would chip a puck around a Carolina defender and help create a 2-on-1 between Jordan Greenway and Luke Kunin.  Greenway would drop a pass back to Kunin who let go a shot that was deflected up into the netting behind the goal.  Despite the early pressure, the Hurricanes would strike first as a one-timer from the point by Joel Edmundson beat Devan Dubnyk cleanly.  1-0 Carolina.  The Hurricanes’ seemed to awaken after Edmundson’s goal and they started to raise the tempo of the game and Minnesota struggled to keep up.  Carolina would add to its lead a few minutes later as Teuvo Teravainen would send a pass out near the top of the Wild crease where Brock McGinn would lift a shot just underneath the crossbar to make it 2-0 Hurricanes.  The Wild didn’t have much of a push back after these two quick goals as the Hurricanes’ superior team speed was very evident.  The ‘ZZ-Top’ line had an excellent shift as Eric Staal set up Jason Zucker for a shot from just inside the right faceoff circle that was blocked aside by Reimer.  The hustle of this line would help draw a tripping penalty on Erik Haula as he tripped up Mats Zuccarello.  Minnesota wasn’t able to do much with the man advantage as the Hurricanes’ penalty kill did a nice job of applying pressure to the Wild’s puck carriers.  The Wild were able to set up but they weren’t able to turn possession time into shots being directed on goal.  A few minutes later it was Eriksson Ek attempting a wrap around but he couldn’t tuck it in.  Moments after that it was Greenway trying to jam a shot through with Eriksson Ek again crashing the crease and poking at the puck to no avail.  Edmundson wasn’t happy and he’d get into it with Matt Dumba and both defenseman would get sent to the sin bin.  With the ice a bit more open 4-on-4, and predictably this would benefit Carolina and Minnesota looked like they were on the penalty kill.  Brad Hunt would strip Martin Necas of the puck and he’d skate down the ice and make a nice saucer pass to Eric Staal who seemed to be all alone but he’d lose control of the puck before he could get a shot off.  Minnesota would have another scoring chance late in the period as Zach Parise tried to wrap a backhander on goal that was denied by the paddle of Reimer.  The period would end with Minnesota still trailing by two.

2nd Period Thoughts:  Eric Staal would face off against Jordan Staal to start the period.  Minnesota would draw a penalty on Trevor van Reimsdyk as he would hold up Eriksson Ek from skating out in front of the Carolina crease.  Zucker would race into the Carolina zone and he’d rip a shot high and wide of the mark and unfortunately would help clear the zone for the Hurricanes.  The Wild’s best chance of the power play was a point shot by Dumba which Reimer knocked down and unfortunately Zuccarello wasn’t able to pounce on the rebound.  Shortly after the failed power play the Wild kept attacking and it was Jonas Brodin carrying the puck deep and dropping a pass back to Kunin who hammered a shot by Reimer.  2-1 Hurricanes.  Minnesota kept swarming in the Carolina zone as Zucker set up Eric Staal for a shot from the slot that was snagged out of the air by a big glove save by Reimer as Staal ran into the goal after he was stopped.  Minnesota had good momentum going for them as they were winning a fair share of the races to loose pucks and with time and space on the ice in short supply the Wild were handling the puck pressure pretty well.  Yet as much as Minnesota had carried the play most of the period, the Hurricanes would get one quality scoring chance as Jordan Staal won a puck battle and the biscuit was swept up by Ryan Dzingel who fed it back to Warren Foegele who lifted another shot underneath the crossbar behind Dubnyk.  3-1 Hurricanes.  Carolina was content to chip pucks and force Minnesota to work for every opening they’d get on the ice.  Dougie Hamilton would trip up Greenway as he tried to enter the Carolina end giving the Wild another power play.  On the man advantage the Wild won the initial faceoff and the puck ended up on the stick of Ryan Suter who had tons of time and space to work with and he’d let go of a wrist shot that was absorbed by Reimer with a few Wild players standing near by.  The Hurricanes’ penalty kill was aggressive, challenging the Wild even in its own end and Minnesota would break through and have a great chance off the rush as Kevin Fiala dangled into the slot but his wrist shot was steered away by Reimer.  The power play came up empty and the Hurricanes kept applying pressure and Fiala would trip up Necas to give Carolina its first power play of the game.  On the power play the Hurricanes’ moved the puck quickly and Necas blasted a shot from the point that was fought off by Dubnyk.  Minnesota would counter attack in the closing seconds of the Carolina power play as Dumba dangled around a defender and he fired a shot on goal that Reimer stopped and Parise would sweep home the rebound.  3-2 Hurricanes on Parise’s shorthanded tally.  Minnesota continued to attack and it was Victor Rask finding Carson Soucy with a pass and he ripped it by Reimer to tie the game, 3-3.  It was Soucy’s first NHL goal.  Carolina would apply pressure late but Minnesota was able to defend well enough to skate into the 2nd intermission tied at 3 goals apiece.

3rd Period Thoughts:  The Hurricanes looked hungry and dangerous to start the 3rd period as they were applying lots of puck pressure.  The Hurricanes had a good chance early in the period as Jordan Martinook had an opportunity on a partial breakaway but Dubnyk made the save.  The Wild would try to activate its defense in search of the go-ahead goal but to no avail.  At times the Wild were content to sit back in a 1-2-2 and wait for the Hurricanes to turn the puck over.  Minnesota would appear to get the goal they were looking for as Eriksson Ek let loose a heavy shot that seemed to sneak through the pads of Reimer as he sat back in his goal and the puck squirted back out front with the officials waiving ‘no goal’ on the play.  Minnesota continued to apply pressure as Fiala had a weak shot from in close that was covered up by Reimer which drew the ire of Haula who put the Wild winger in a headlock.  In a replay that was shown on television after Reimer’s latest save, the Carolina goalie was able to keep the puck from completely crossing the goal line as he pivoted his leg pad just in time.  Ryan Hartman would get tagged with an interference penalty giving the Hurricanes a great chance to take back the lead.  On the power play, the Hurricanes set up Teravainen for a one-timer that was held onto by Dubnyk.  The Hurricanes power play moved the puck quickly and efficiently but Parise would make some key shot blocks hold Carolina’s offense at bey.  Minnesota would try to go on the attack and Carolina did a good job at being physical at the right times but the Wild kept taking the puck to the crease.  Greenway would make a nice power move starting at the wall and his close in bid would be partially deflected by Reimer and the puck hit the left post and stay out.  Minnesota kept sending shots on goal as Soucy stepped into a shot that gave Reimer some trouble but unfortunately Zuccarello couldn’t pounce on the puck before it was swept up into the stands.  The Wild were doing a great job of working pucks deep and creating some sustained offensive pressure with good hustle and being willing to take a hit to make a play.  It was sort of a territorial chess match as both clubs were wary of making a costly turnover that would lead to an odd-man rush the other way.  The game would go to overtime.

Overtime Thoughts:  The Wild started with Eriksson Ek along with Brodin and Dumba.  Carolina possessed the puck early, but the faster Wild group made it tough for the Hurricanes to get anything going as Minnesota forced them to turn it over.  Minnesota would ultimately set up Kunin to race into the Carolina zone with speed and his shot would be stopped by Reimer but he couldn’t get to his own rebound and the Hurricanes would counter attack.  On the counter attack Andrei Svechknikov would move in, and let go a snap shot that beat Dubnyk cleanly to give Carolina a 4-3 overtime victory.

RW – Ivan Lodnia (Niagara, OHL) ~ the former 3rd round pick earned 2nd star honors of the game with 2 goals and a helper on 3 shots in Niagara’s 6-5 overtime loss to Peterborough on Thursday night.  Lodnia has 9 goals, 16 points, 4 PIM’s and is +2 in 10 games.

G – Hunter Jones (Peterborough, OHL) ~ the goaltender may not have had one of his best nights on Thursday, but he had 19 saves in the Petes’ 6-5 overtime win over Niagara.  Jones has a 13-2 record, 2.82 goals against average and a .905% save percentage with 1 shutout this season.

C – Alexander Khovanov (Moncton, QMJHL) ~ the skilled Russian continues to pile up the points as he had two goals and an assist on 3 shots in Moncton’s 5-1 win over Gatineau on Friday night.  Khovanov has 16 goals, 37 points, 33 PIM’s and is a +22 in 18 games.

C – Sam Hentges (St. Cloud State, NCHC) ~ the former Totino-Grace star has an assist in the Huskies 4-2 loss to Colorado College on Friday.  Hentges has 6 goals, 15 points, 4 PIM’s and is an ‘even’ rating through 8 games.