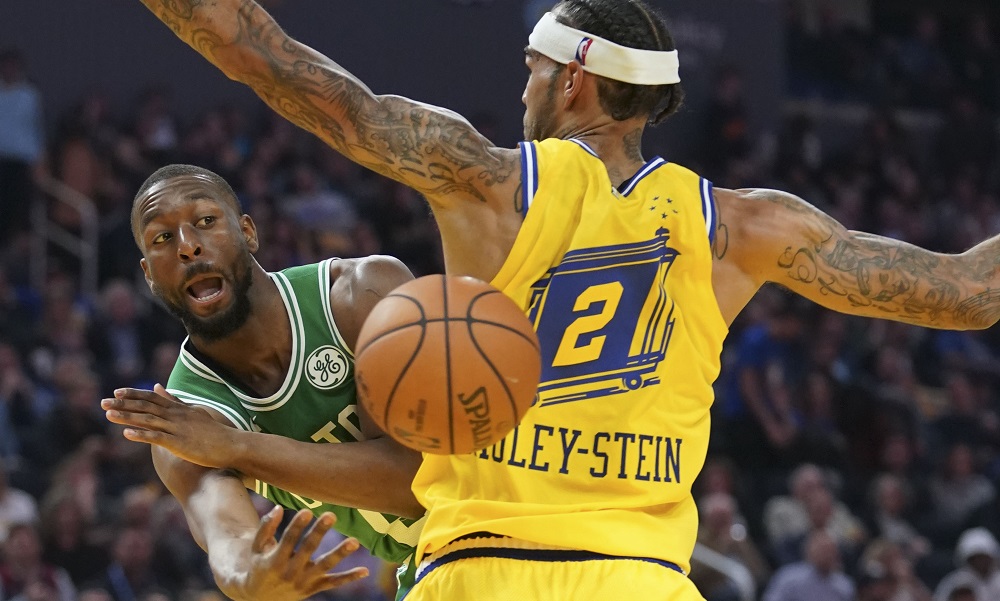 Home, road, doesn’t matter – Celtics win again. The Cs began a five-game trip out west with their 10th consecutive win, 105-100, over the Golden State Warriors at their new arena. Boston was led by the potential All-Star trio of Jayson Tatum (24 points), Jaylen Brown (22), and Kemba Walker (20), and each of them had one huge quarter. Alec Burks led the Warriors with 20.

No worries. The Celts turned it around in the second quarter. The defense forced six Warriors turnovers in the period.

I think this 'play some defense' and 'make shots' thing is working, let's keep doing that

When the halftime buzzer sounded, the Cs held a 52-51 advantage. Tatum led all scorers with 17 (a dozen in the second).

Good start to the third.

Kemba with the feed, Theis with the finish pic.twitter.com/Ve8KNoMqCv

Smart drained his fourth triple, making it four straight games where he’s made that many. (He finished with 5 threes and 15 points.)

Marcus Smart now up to 40.5 percent from 3-point range on the season

Marcus Smart 4/7 from three so far tonight, he’s only shot from outside the arc, and @celticsvoice jokingly calls for him to be in the 3-point contest. I love it! Can we make that happen?!?

Jaylen went off in the quarter, making 3-3 from the arc on his way to 13 points, and added 2 boards, 2 assists and 2 steals. The Warriors made just 4-15 and committed 9 turnovers in the quarter. Boston led 76-71 going to the fourth.

jaylen with at least 19 points in 6 out of his 8 games, 4th straight game with at least 20 points.. please keep telling me he's trash

The fourth started badly for GS.

D’Angelo Russell is done for the night. Left with a right thumb sprain and will not return according to #Warriors.

But they turned up the aggression, got to the rim and the line, and took a lead. The refs were a factor: Warriors shot 13 free throws in the quarter to the Celtics’ 8 (for the game, GS 34, Boston 23).

this has been an unbelievable 4th quarter. Refs helping gsw on every possession https://t.co/yt00RWwfaJ

It was back and forth down the stretch as neither team would give in.

It’s so weird that the Warriors are unrecognizable now.

The game turned when an out-of-bounds call was overturned – Smart made a great save – with 1:39 remaining. Instead of Warriors’ possession, there was a jump ball. Tatum picked off the tip and went in for a dunk that put the Cs ahead, 98-97.

Went back and watched Tatum stealing the tip. Right before the play, Smart appeared to have told Tatum where Cauley-Stein was going to tip it.

A defensive stop and a Tatum fadeaway in the lane gave Boston a three-point lead. Another stop and a Kemba stepback made it five, and completed a 12-0 run. Walker scored 14 in the fourth.