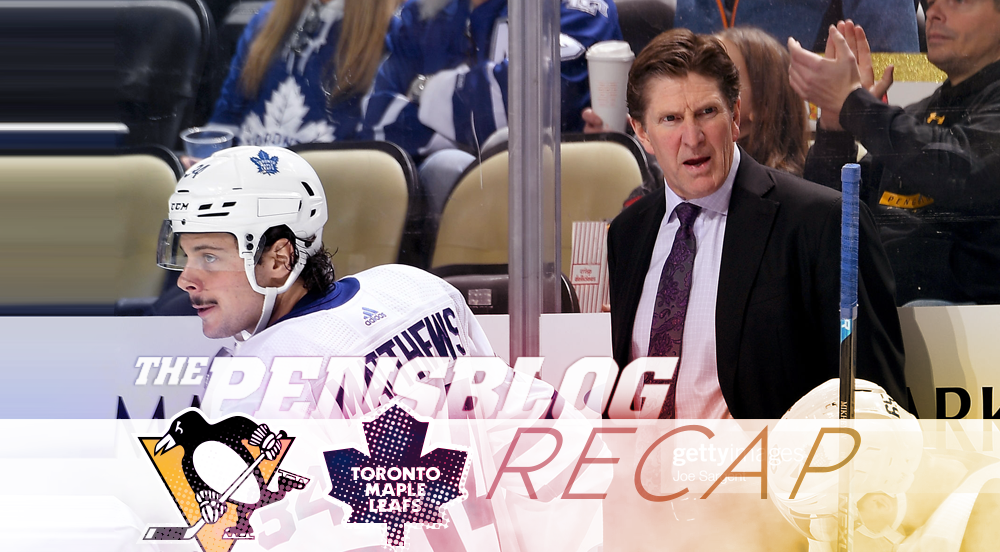 The great thing about beating the absolute brakes off of the Toronto Maple Leafs is that every little part of it gets microanalyzed by the entire Toronto fanbase to see what went wrong.

live look at the state of the maple leafs pic.twitter.com/dTGOsn0KId

With last night’s loss, the Leafs have now lost their last 4 and are 3-5-2 in their last 10.  They’re closer to the bottom of the conference than they are to the top of their division.

You know what that means!

Pens were without the services of Nick Bjugstad, who left Friday night’s loss to the Devils early.  Blandisi got the call up and on the back end of a back-to-back, Jarry got the nod against some guy named Kasimir Kaskisuo, who was making his NHL debut and who is definitely real and definitely had a family at the start of the game.

If your own flesh and blood is removing your own jersey, it’s game, set, and match.  There’s no coming back from that.

The writing was on the wall for this one just over 6 minutes into it with Freddy Gauthier in the box for tripping up Rust.  Things are simply not going to go your way if the Penguins horribad powerplay is getting shit going against you.

In fact, someone should start a petition that if the Pens PP scores against you this year, your franchise has to be relegated to the ECHL for the next 5 years.

This is Blog Law now.

Pens had it whipping around the perimeter, eventually setting up Galchenyuk for a shot from the top of the faceoff circle.  Guentzel got a piece of it to keep it alive, staying with it to bang home off the post and off Kazooie’s skate.

About two minutes later, the rout was on.

Dumo City down low.  Marino cleaned up the front of the net and sent Rust off on a 3v2 with Gene and Jake.  Rust hit the neutral zone with speed, feeding Jake to enter the offensive zone.  Rust’s big time centre drive took Muzzin out of the play, opening up the lane for Bake to hit Malkin swooping into the high slot.

Elite flex from 71 to take it off his skate and put it immediately into a shooting position.  You know he ain’t missing from there.

Both teams traded off some chances in the remaining time in the first, but the backbreaker game just 52 seconds into the 2nd.

Kahun burrowed in deep, doing the dirty work to open up a lane to feed Marino at the blue line.  Marino deferred back to Kahun, who just turned and threw a hopeful shot at the net. Fortunately, Kaskigoo couldn’t track shit through the Rusty Muzzin screen.

Less than 4 minutes later, Kahun was back in the goal column right after Jarry made a big save on Tavares in front.

Jack Johnson, who allegedly completed his first pass of the season on this play, hit Tanev with a huge cross ice stretch pass at the far blue line.  Tanev, who has been brilliant this season, spun his man and attacked Muzzin, swinging in on the backhand.  Muzzin took him out, leaving Tanev to just launch into Not Korpisalo.  Kahun picked up the loose puck and dumped it into the empty cage.

It was initally waived off, but Sully challenged it because what the hell is Tanev supposed to do there.  The league felt the same way, reversing the call and making the Penguins play Jump Around.

The second period explosion continued about 3 minutes after that, again through Kahun and Tanev.

Following a Trade Me pass from Tyson Barrie, Tanev and Co. were sprung on a 3v2.  Tanev gained the zone, hit Kahun, and continued to drive right through the heart of the Leafs defense.  That opened up the pass to McCann creeping in from the left wing, stepping into a wrister from the high slot.

The cowardly Leafs would not go away, though, and hit the Penguins on the counter attack to break Jarry’s shutout bid.

The Malkin line was pressing and got a clean look at the net through Guentzel.  Kalamity made the save and Barrie was there to panic sweep it away to the neutral zone before Marino could bang it home.  Malkin’s desperation attempt to keep it away from Petan nearly came off, but ended up with Petan going in 1v1 on Dumo.

Dumoulin, unsurprisingly, defended it really well and forced Petan wide, eventually making him turn his back to goal, but Spezza came in on the blindside of Malkin to pick up Petan’s drop off and rip a wicked little wrister by Jarry’s glove hand.

Just 2 minutes into the final frame, the Leafs were put on the powerplay to give them a chance to make it a 3 goal game.

Jarry had other plans for them, though, keeping them at bay until Blueger and Rust could officially ice the game.

Power move from Blueger to hound the hell out of the puck as the Leafs entered the zone, stealing it and taking off on a shorthanded 2v1 with Rust.  The vision and creativity out of Blueger to look off Rust, sell shot to both Barrie and Kazaam before slipping a little backdoor feed to 17 was something special.

And that’d be the last of it.  A fitting dagger for a fitting franchise.

Pens are back at it on Tuesday when the Islanders come to town in the first game of a home-and-home.  There will be blood.