Your Morning Dump...Where this year's Celtics are a whole different animal 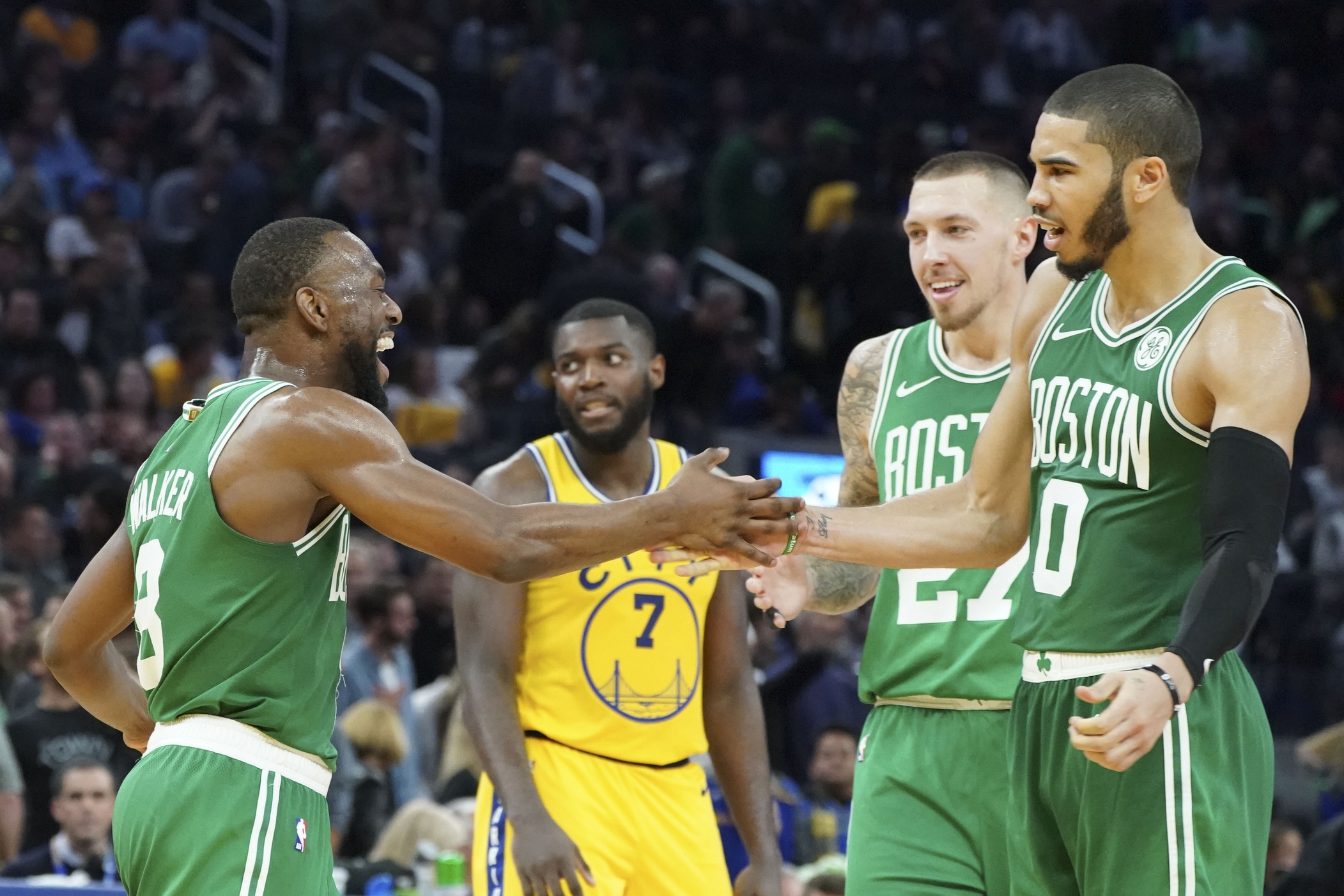 Your Morning Dump...Where this year's Celtics are a whole different animal

The Warriors were making winning plays, snatching offensive rebounds and were receiving some rare good fortune after a miserable start to the season.

Cauley-Stein’s bucket put the Warriors up, 97-92, on the Celtics with 2:37 left in the game. The nine-game winning streak was in serious jeopardy. The Celtics spent the entire second half putting the Warriors at the free throw line, unable to stop Alec Burks from getting to the basket or keep Omari Spellman off the offensive glass…

As much as this year’s team doesn’t like comparisons to last year’s, that Kyrie Irving-led squad would have lost this game, collapsed under the onslaught, succumbed to the pressure.

Instead, Kemba Walker responded with a momentum-changing 3-pointer and later, Jayson Tatum anticipated Cauley-Stein’s tip off a jump ball and raced to the basket for the go-ahead dunk. The Celtics wouldn’t trail again in their 105-100 win, extending the winning streak to 10.

To say it bluntly, things feel different nowadays. While I haven’t been one to pin everything that happened last season on Kyrie Irving, there’s a clear difference with Kemba Walker at the helm. He doesn’t let his moods dictate his actions on the court, he doesn’t let the outside noise get to him, and while Irving was everything he was advertised as in the 4th quarter, so is Walker.

Walker is 5th in the NBA in 4th quarter scoring 8.7 points per night on 49.1% shooting from the floor, 53.6% from deep, and 85.7% from the free-throw line. Long story short, the dude is absolutely nails when the lights are shining at their brightest. That didn’t change Friday night as he potted 14 points in the 4th while going a blazing 5-8 from the field. All of this after starting out 1-11 in a game where it looked like he just didn’t have it.

And, anddddd, he pulled out the Walker Wiggle.

Kemba’s just happy to be here and he’s grateful to be able to wear the threads of a team that gives him a chance to finally win in the NBA after years of mediocrity in Charlotte.

“I’m lucky just to win, I’ve never won this many games in a row,” Walker said. “I’ve never had a start like this on this level. I’m just liking the way I’m feeling after the games. I feel good. That’s all I’m thinking about. I could care less about the streak, it’s just the feeling of winning. It feels good.”

It’s lazy to blame Irving for everything that happened last season as not only has Walker stepped his game up, but the other guys on the Celtics have been able to bear down when the going has gotten tough. Take a look at Jayson Tatum, the same man who was blasted all of last season for not taking the leap most expected him to after he burst onto the scene his rookie year. He’s been one of the steadiest guys on this team when things have gotten tough. His two threes to bring the Celtics all of the way back against Milwaukee, his game-winner against the Knicks, and then this play from Friday night.

Tatum snatches the jump ball and throws it down to take the lead in crunch time, earning himself tonight's @JetBlue Play of the Game 💪 pic.twitter.com/8JQkxxSrti

He’s making winning plays and it shows how much he’s grown from the debacle that was last season. His poise and confidence have been so impressive early on and it’ll be fun to watch him develop even more as the season goes on. He has all-world potential, and it’s about time we see it come to fruition.

Then to top it all off, you have different guys stepping up night in and night out to fill in the holes. It’s been a great year for Brad Stevens thus far as he’s taken his roster and has applied it the best way possible every night. It’s a breath of fresh air as last season applying the pieces was something he struggled with on a nightly basis.

Basically, everything that the Celtics didn’t do last season, they’re doing now and everything they did do last season has gone out the window and into the garbage can. It feels like there’s been a renaissance in Boston and it’s about time we had one.

Page 2: Where Marcus Smart is now a 3-point-marksman???

The sixth-year guard knocked down 5-of-9 3-point attempts on Friday night to chip in with 15 points in 35 minutes. It was his fourth consecutive game making four or more 3-point attempts, helping lift his accuracy to 40.8 percent on the season despite taking 6.9 attempts per game.

The days of Garden fans groaning when Smart takes 3s should be long gone after he made 36 percent last year but what Smart is trending towards right now is something special for a guy who is already a first-team All-NBA defensive weapon for this team.

I’m going to try to keep myself grounded here, but I’ll have you know, I spit my water out and cackled hysterically when I read that Marcus Smart was shooting 40.8% from the three.

All he’s wanted his entire NBA career is to become a great 3-point shooter. After a breakthrough last season he’s taken things to another level to start 2019. It isn’t even the fact that they’re going in, it’s how he looks while he’s taking them. Every single one looks like it’s earmarked for the bottom of the bucket and his shot looks as good as we’ve ever seen it.

Another thing that is starting to creep into my mind: if he keeps this type of smoldering hot shooting up, he’s going to HAVE to be in the 3-Point Shootout. It’ll be poetic, it’ll get Boston radio heads scratching their heads, and hey, he might even mess around and win the whole damn thing.

NBC Sports Boston: Jaylen Brown comes up big on the anniversary of his friend’s death

MassLive: Tacko Fall has a real opportunity in Maine