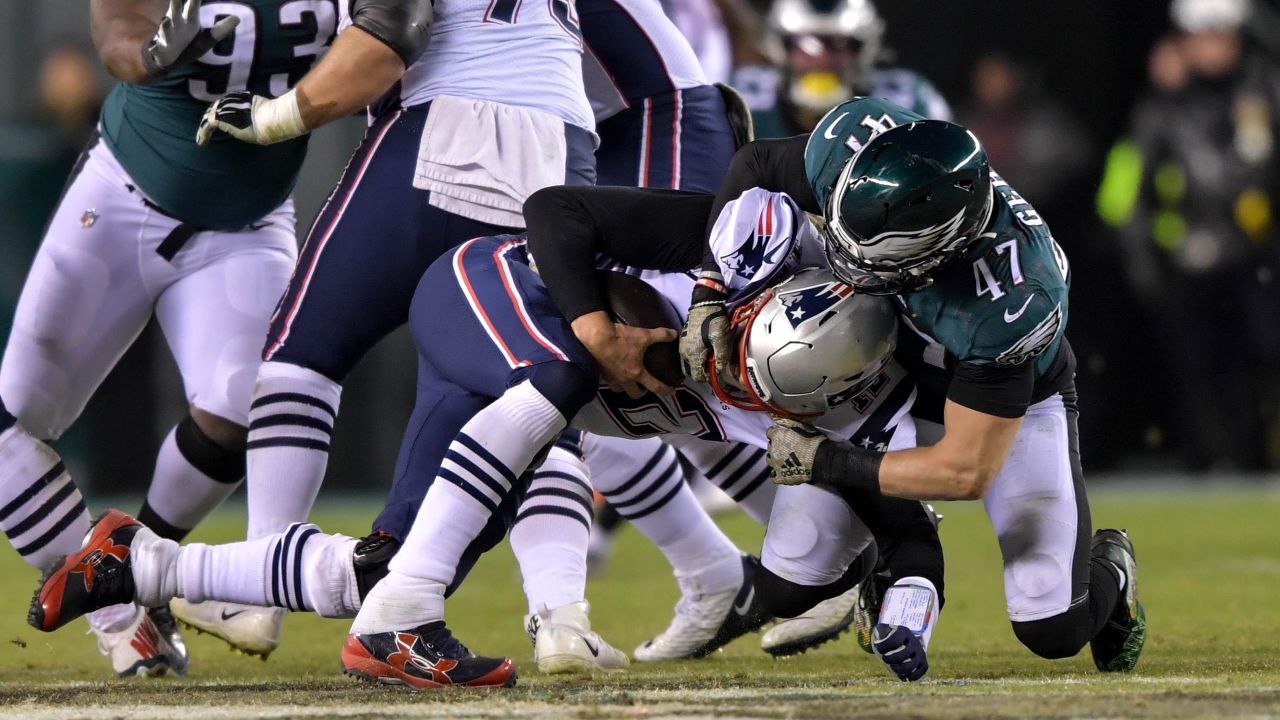 Hard to remember a better defensive effort by the Eagles against a playoff-caliber team, but the Patriots’ defense was so effective in beating down the Eagles’ depleted offense that nothing else mattered. After a very good start, Carson Wentz and his guys came up empty the rest of the way. Part of that was about losing RT Lane Johnson in the first half (concussion), but most of it was failure to adjust to the pressure and coverage changes the Patriots made at halftime.

And the Birds coughed up a turnover and had numerous dropped passes and poorly thrown passes. You just can’t overcome those mistakes in a close game against the Pats, especially when your offense goes stone cold. All of this put the Eagles’ defense in double jeopardy for most of the game.

It took a flea-flicker-style play out of the Belichick Emergency Playbook to get the winning edge over an Eagles defense which was on the field way too long but played probably its best game of the season.

Julian Edelman threw a go-ahead 15-yard TD pass to Phillip Dorsett and the New England Patriots rallied for a 17-10 victory over the Philadelphia Eagles on Sunday.

Tom Brady threw for 216 yards, leading New England (9-1) back from a 10-0 deficit, but it was Edelman, the Patriots’ gritty wide receiver, who found a target in the end zone. It was the first time in Brady’s career that another player on his team had more TD passes when he played the entire game.

“Good read on the play,” Belichick said in a rare post-game moment of jocularity. “Keeps his quarterback rating up there pretty high. I’m sure he’ll ice his shoulder this week, massage it. Great play by Julian.”

Brady wasn’t happy with the offense’s performance despite a win that guaranteed the Patriots a winning season for the 19th straight season. That’s because Jim Schwartz and his increasingly healthy defense made the afternoon very difficult for Brady’s bunch. “We could do everything better,” he said.

The Patriots defense led the way once it got rolling. They sacked Carson Wentz five times, forced one turnover and another that was overturned to give the Eagles a touchdown.

“I felt like we gave up three points,” Belichick said. “We got an interception. They overturned it.”

I disagree with Bill on the interpretation of that play in question. Dallas Goedert had clear possession of the ball when it touched the plane of the goal line. Video replay confirmed it.

Wentz couldn’t get much going without his two best receivers and top running back sidelined by injuries. Nelson Agholor couldn’t make a twisting catch on Wentz’s fourth-down heave into the end zone from the Patriots 26 with just under a minute left.

The Eagles (5-5) got the ball back and advanced to their 42 but Wentz’s desperation pass fell incomplete.

“That’s a really good defense,” Wentz said. “They did a good job taking away things we wanted to do. But we have to be better.”

This was nothing like the high-scoring matchup between the two teams in Super Bowl 52. Neither team could get in sync on offense in the rematch.

After settling for three field goals in the first half, the Patriots turned to a trick play.

Brady drove them to the Eagles 15 on the opening possession of the third quarter. Facing a third-and-11, Brady tossed a backward pass to Edelman. The former Kent State quarterback fired a perfect pass to Dorsett, who was alone in the end zone. It was Edelman’s second career TD pass. The other came in a playoff win over Baltimore in January 2015.

James White ran in for the 2-point conversion to increase the Patriots’ first lead to 17-10.

The teams traded punts the rest of the second half.

Wentz tossed a 5-yard TD pass to Dallas Goedert early in the second quarter to give the Eagles a 10-0 lead. The play was initially ruled a turnover because Jonathan Jones ripped the ball away. But the call was overturned after a review.

The Patriots didn’t cross midfield until Brady connected with Benjamin Watson for 22 yards to the Eagles 31 near the midpoint of the second quarter. But they had to settle for Nick Folk‘s 35-yard field goal to cut it to 10-3.

Brady hit Watson again over the middle for a 19-yard gain to the Eagles 4 on New England’s next possession. But Edelman dropped a TD pass on second down and Folk hit a 22-yarder to get the Patriots to 10-6.

New England’s defense then delivered a big turnover. Danny Shelton sacked Wentz, forcing a fumble that was recovered by Lawrence Guy at the Eagles 22. But Philadelphia’s defense held again, forcing the Patriots to settle for another field goal. Folk nailed a 39-yarder to make it 10-9.

Before Edelman’s TD pass, the Patriots tried a similar play. Rex Burkhead took a handoff and threw a backward pass to Brady, who fired a deep ball incomplete.

(Earlier, the Eagles had center Jason Kelce go in motion and line up in the slot. He threw his arms up and waved for the ball, but the pass went the other way to Miles Sanders for a 5-yard gain.)
One reason the Eagles struggled is the Patriots secondary figured out how to cover every single receiver from every formation Wentz tried to throw from. Wentz basically found himself stranded in the pocket with nowhere to go on many occasions. It compounded the problem when Wentz missed on a few open targets he did find. Then his pass-protection had some breakdowns, not helped by a few lapses in blocking by Big V filling in at RT for the injured Johnson, and a whiff or two by Miles Sanders trying to pick up a blitz.
You might be advised to take heart from the defensive performance of the Eagles in a close loss to a good team. But in the end, one must realize this team is going nowhere unless it fixes its offense pronto. It won’t get any easier against Seattle coming up.
INJURIES:  Patriots: Dorsett left the game with a head injury in the second half. … . S Patrick Chung (chest) was inactive.Eagles: All-Pro RT Lane Johnson left with a head injury in the first half. … RB Jordan Howard (shoulder), WR Alshon Jeffery (ankle) and LB Nigel Bradham (ankle) were inactive.