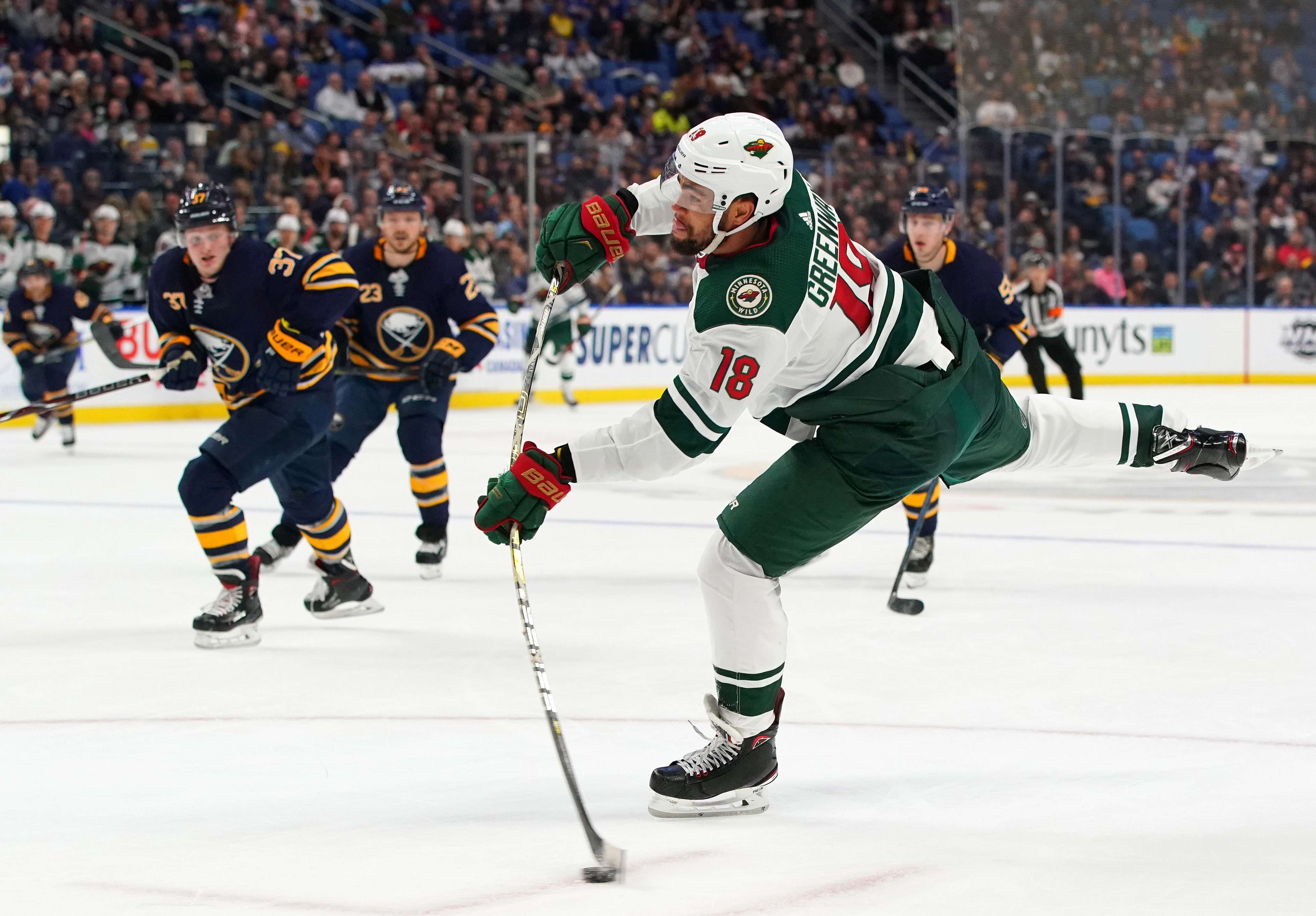 “It’s really frustrating, Its like penalty killing.  Your goalie is your best penalty killer.  Its like that in all situations,” said Minnesota Wild Head Coach Bruce Boudreau after Saturday’s 4-3 overtime loss to Carolina.  I don’t think its difficult to see what the implication is behind the head coaches words without naming the goaltender in question.  Simply put, it hasn’t been good enough especially from its starter, Devan Dubnyk who is 20-27 in overtime according to the Minneapolis Star Tribune‘s Sarah McLellan.

On the flip side, its has been an up & down season for the Buffalo Sabres who at times looks like they’re putting it together to become a playoff team and at others they appear like they are a step or two away.  Yet between the pipes the Sabres have had decent play from both of their goalies.  Can Minnesota earn a road win in Buffalo?

1st Period Thoughts:  It was obvious the scouting report on Buffalo was to send shots on goal at sharp angles as Minnesota sent a number of shots on Linus Ullmark.  Minnesota’s early pressure would draw a holding penalty on Jake McCabe giving the Wild the first power play of the game.  Right off the initial draw, Matt Dumba would ring a shot off the left post.  The Wild moved the puck well on the man advantage but Zach Parise would trip up Ullmark to negate 30 seconds of the power play.  The Sabres had trouble getting set up on the power play as Minnesota did a nice job of challenging the zone entries.  The Sabres did manage to work a play to Victor Olofsson who blasted a one-timer that was fought off brilliantly by Alex Stalock.  As Minnesota got the kill, the Wild would force a turnover in the neutral zone and Joel Eriksson Ek would dish a pass to Parise for a tap in goal off the rush.  1-0 Wild.  The Sabres would have some close opportunities as opportunities to tie the game as Stalock had to be sharp to deny Jeff Skinner and Olofsson on chances from within 20 feet from the crease.  The Sabres were steadily ramping up the offensive pressure while the Wild looked static and fighting the puck whenever they had the chance to work it out of their own end.  Stalock had to keep his head on a swivel as the Sabres were sending shots from all over the Wild zone.  Olofsson had another great chance from the slot that Stalock blocked aside.  There were a few Wild players that appeared to be pretty stiff-legged on the ice, and not anticipating the play much at all.  Victor Rask and Eric Staal were having a hard time keeping up with the pace and this would squander some potential scoring chances as a steal by Ryan Hartman turned into a hard shot that Ullmark gave up a big rebound but Rask wasn’t in position to capitalize on it.  Minnesota would ramp up the pressure late in the period, using the point men to get pucks on goal and Staal tried to lift a shot by Ullmark was able to hold on for a save.  The Wild would draw another penalty as Rasmus Ristolainen would haul down Mats Zuccarello who was crashing the Sabres crease.  On the power play the Wild would strike in the closing seconds of the period as Parise would redirect a point shot by Ryan Suter to give Minnesota a 2-0 lead to stunned silence from the Buffalo crowd.  The Sabres fans would rain a few boo’s as the period ended with their club trailing by two.

2nd Period Thoughts:  The Sabres had good energy to start the period and the Wild were well prepared to weather the storm as they didn’t let Buffalo have much time and space.  Whether it was strong play on the puck by Jared Spurgeon to neutralize Jack Eichel or a timely poke check by Brad Hunt the Wld were making the timely plays in their own end.  Minnesota’s terrific defensive effort was rewarded in the offensive zone as Zuccarello and Jason Zucker who skated out to the point before finding Jonas Brodin with a diagonal pass and he’d move in and beat Ullmark with a backhander.  It appeared to be 3-0 Wild, but Buffalo Sabres’ head coach Ralph Kruger would challenge the play saying it was offsides. The play was reviewed, it appeared that Dumba had not yet touched up as Connor Sheary brought the puck over the blueline on his own.   After the review, the officials said the play was in fact onsides and Minnesota had a 3-goal lead and a 2-minutes delay of game power play due to the failed challenge to a chorus of ‘refs you suck’ chants.  Minnesota tried to set up Spurgeon on a back door play but he was unable to pull the trigger on the nice pass by Parise.  About a minute later, Staal tried to thread a cross ice pass to Zuccarello but the pass was blocked by Henri Jokiharju and Staal tried to jam it home only to be stopped by Ullmark.  In a strange move, Eichel would drop the gloves with Eriksson Ek who appeared to be surprised as the American-born captain of the Sabres was throwing haymakers while the Wild forward just sort of hung on.  With the Sabres crowd appreciating the feisty play of Eichel as Minnesota would get a 4-minute power play as the Sabres’ captain got a double minor for roughing.  The Wild were fairly passive with the extended man advantage as they were wary of making some kind of a mistake that could change the momentum of the game.  Minnesota was too nonchalant with the puck and this led to a lazy tripping penalty by Spurgeon.  The Sabres would get an abbreviated power play and Eichel looked like a man on a mission as his shot was stopped by Stalock.  Minnesota’s penalty kill did a great job at challenging the zone entry and quickly sent the puck out of the offensive zone keeping their 3-goal lead intact.  The Sabres again swarmed the Wild zone, but Stalock and Minnesota stayed calm and kept Buffalo’s offense at bey.  Another penalty by the Sabres gave Minnesota a chance to extend its lead.  On the man advantage the Wild controlled the zone and managed to create a few quality scoring chances but Ullmark was up to the task.  The Sabres would pour on the pressure in the last minute that had Minnesota scrambling around its own zone but Stalock shut the door to keep the Wild up 3-0 going into the 2nd intermission.

3rd Period Thoughts:  Minnesota would start the period, sitting back in a 1-2-2 trap and challenging the Sabres as they skated through the neutral zone.  The Wild were moving their feet well and not giving Buffalo much in the way of time and space on the ice.  Minnesota would draw another penalty as Carson Soucy was tripped up as he entered the zone by Jokiharju.  The Wild didn’t do much with the power play other than send a few shots from the half wall that didn’t reach Ullmark.  Minnesota was playing smart, continuing to hustle and not giving Buffalo any chance to build momentum offensively.  Koivu would trip up Jokiharju giving the Sabres a chance to cut into the Wild lead on the man advantage.  Minnesota’s penalty killers did a great job of applying pressure to the Buffalo puck carriers and were able to force turnovers and clearing the zone.  The Sabres would again swarm near the Wild crease and it was Sheary letting go a backhander that was fought off by Stalock.  Minnesota did a nice job of getting sticks into shooting and passing lanes and the Sabres never seemed to be able to create too many clear shooting opportunities on goal.  Victor Rask was set up out front but he couldn’t pull the trigger as the puck was in his skates.  The Sabres would pull Ullmark for an extra attacker with about 4:30 left in the game.  This helped the Sabres hold the zone and it was Brandon Montour who pounced on a rebound to cut the Wild lead to two, 3-1.  The Sabres would call a timeout to discuss their plan of attack and it was no surprise that Buffalo were looking to attack.  Stalock would come with a big save and with the Sabres goalie pulled they would seal a win on Zucker’s empty net tally.  4-1 Wild.

The Wild split a home-at-home series with the Wolves this weekend.  Iowa has been one of the AHL’s better defensive teams and has had decent goaltending from Kaapo Kahkonen and Mat Robson.  Yet, if there are some concerns it is how the offense has tailed off after a torrid start.  Go too goal scorer Gerald Mayhew has been neutralized while Kyle Rau and Gabriel Dumont have flatlined.  Iowa is still waiting for some secondary scoring from forwards like Nico Sturm, Sam Anas, Will Bitten, Brandon Duhaime, J.T. Brown and Colten Beck to emerge to help the club on those nights the 1st line is held in check.  Brennan Menell is the only defenseman that has done much offensively and they certainly could use more offensive contributions from Louie Belpedio and Matt Bartkowski.  There is hope that the return of Luke Johnson to the lineup could give the club a much-needed offensive boost.  It certainly is not dire straights, but the club has leveled off after its hot start.

LW – Vladislav Firstov (UConn, H-East) ~ the skilled Russian has had a modest start to the season but he had an assist on 3 shots in the Huskies’ 2-1 win over UMass-Lowell on Saturday.  Firstov has 2 goals, 6 points, 4 PIM’s and is a +1 in 10 games.

LW – Adam Beckman (Spokane, WHL) ~ the Saskatoon-native was the featured prospect in the Hockey News’ latest prospect issue and he’s continuing to create some buzz with 2 goals and an assist in Spokane’s 4-3 win over Tri-City on Saturday earning him 2nd star honors in the process.  Beckman has 9 goals, 30 points, 4 PIM’s and is a +18 in 18 games.

D – Fedor Gordeev (Guelph, OHL) ~ the big defenseman demonstrated at Wild prospect camp that he has more skill and mobility than one might expect and he continues to chip in offensively with assists as he had 2 helpers in Guelph’s 2-1 win over Saginaw on Saturday.  Gordeev has no goals, 13 assists, 17 PIM’s and is a +3 in 18 games.