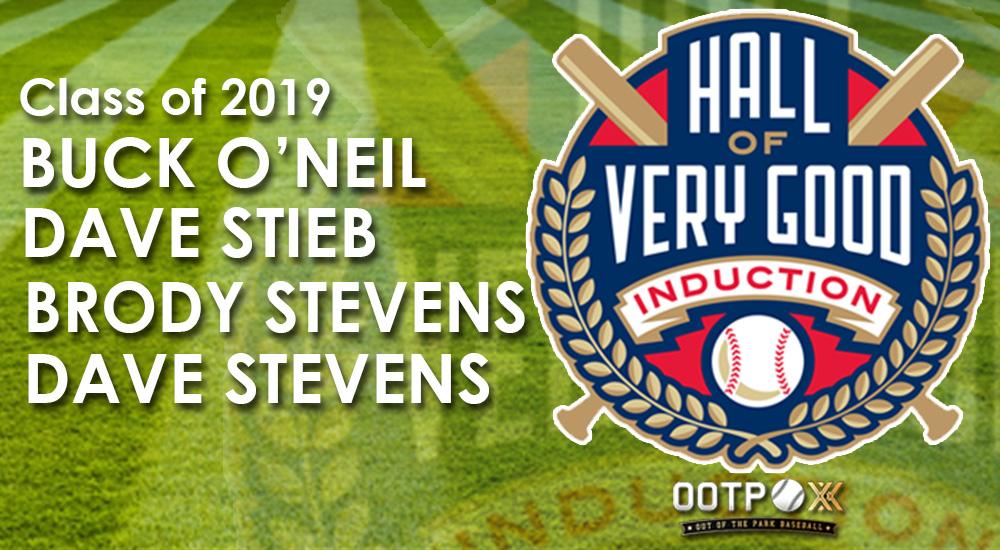 Since 2012, The Hall of Very Good™ has done its best to shine a light on those that Cooperstown has seemingly forgotten. Almost one year ago, the National Baseball Hall of Fame finally saw the light and opens its doors to 2015 HOVG Inductee Lee Smith.

This year’s class includes a pair of players who, like baseball’s onetime all-time saves leader, deserves another look.

In 2006, a group of Negro Leaguers were honored by baseball’s Hall of Fame. Not among the 17 selected for inclusion…BUCK O’NEIL. Considered by many as one of the league’s finest first basemen, O’Neil played 12 seasons in the Negro Leagues. He’d finish up with a career batting average just below .300 and four seasons above that benchmark.

After his career, O’Neil stayed around the game as both a pioneering coach (he was named the first black coach in Majors in 1962) and, eventually, a scout. As a scout, he would be credited with discovering Hall of Famers Lou Brock and Lee Smith.

In 1990, O’Neil led the effort to establish the Negro Leagues Baseball Museum in Kansas City.

It would be hard to carve a Mt. Rushmore of 1980s pitchers and not include DAVE STIEB. The righty would close out the decade with 140 wins…second only to Hall of Famer Jack Morris. In his eleven full Major League seasons, the 2005 Canadian Baseball Hall of Fame inductee would notch double-digit wins in all but one.

After numerous flirtations with throwing no-hitter, Stieb would throw the first (and, to date, only) no-hitter in Toronto Blue Jays history.

Sadly, Stieb would last only one year on the Hall of Fame ballot…getting just seven votes (1.4%) in 2004.

“I surely did not deserve to be just wiped off the map after the first-year ballot,” Stieb told The Sporting News in 2017. “It’s like, please, amuse me and string me out for two, three years.”

During his standup career, BRODY STEVENS became synonymous with the Los Angeles comedy scene. And if you weren’t sure, you could ask him.

But long before landed his roles in both of “The Hangover” movies and “Due Date” (he was cut out of “Funny People”), Stevens was a star on the mound for Arizona State. He’d use his pitching skills to further his career in comedy.

“I think there is an overlap there, for sure. There is a body-language reading that needs to be done when you pitch. You look at the hitter’s eyes, or how they react to a certain pitch, and it’s a similar thing with an audience,” Stevens said in a 2015 interview. “When you’re a comedian, you’re in charge. You decide what joke you’re going to do. When you’re pitching, you decide the tempo. You decide where you’re throwing the ball.”

THE GLENN BURKE MEMORIAL COURAGE AWARD is an annual award presented to a person who has made a significant impact on the game of baseball and, in the process, overcome adversity to succeed on the field.  So it is with great honor and pleasure that The Hall of Very Good announces DAVE STEVENS as the 2019 recipient of The Glenn Burke Memorial Courage Award.

Instead of hips and legs, Stevens was born with “two flipper-like appendages” extending from his torso…but this wouldn’t stop him from competing alongside his able-bodied classmates.

At Wickenburg High School, Stevens was three-sport athlete. On the diamond, he would set a pair of Arizona state high school records…most career baseball walks (132) and the season record for walks (44).

In 1996, Stevens made professional sports history when he signed a three-week contract with the St. Paul Saints. He would go on to try out with both the Cincinnati Reds and the Minnesota Twins. In 1983, he was invited to the Olympic Baseball West Regional tryouts.