Recap 21: The Home Before The At 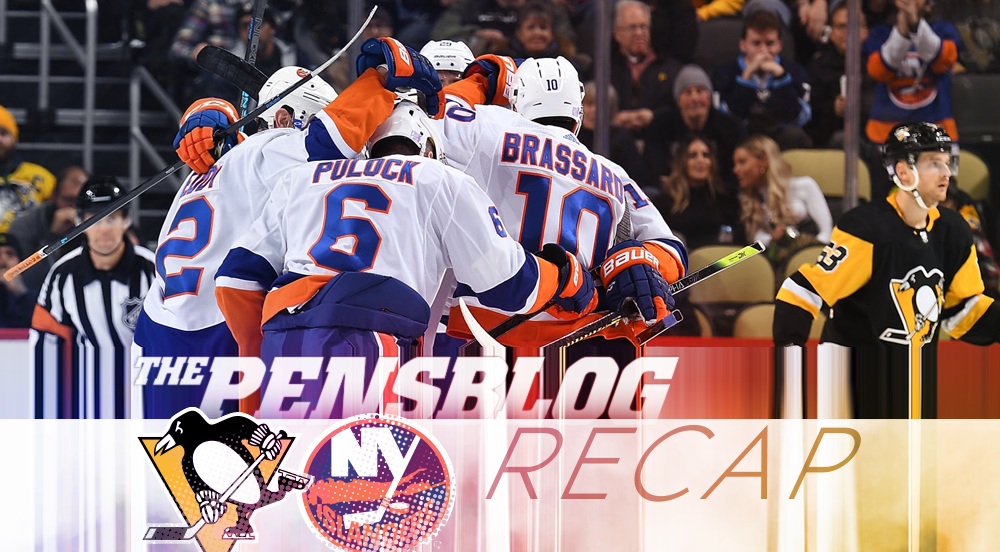 Recap 21: The Home Before The At

At some point, you just have to stop trying to figure something out.

At some point, you just have to accept what your eyes are telling you.

We have tried, myself included, to dismiss how good the Islanders are.

There’s no actual superstar. There’s no stud defenseman. There’s no top-tier goalie but here they are again. Banging down the door of the Metro Division, Eastern Conference, and NHL overall.

Apparently, the Islanders, are #ActuallyGood.

Hornqvist skated with the team but wasn’t ready to return. Letang skated on his own and Bjugstad is out longer-term.

The Penguins didn’t exactly come out buzzing to start the game, sure, they weren’t bad but they just didn’t have the jump and Matt Murray made sure the game stayed even until the Pens penalty kill, which has been excellent, would score another shorty.

Zach-Aston Reese and Bryan Rust would exchange the puck back and forth on a 2-on-1 and ZAR would bury it.

Challenged by Super Mario Bros. Goomba Barry Trotz and the play was determined to be offsides and yeah…it was.

Clear cut. We can’t bitch about reviews just when they don’t go our way. Moving on.

This could’ve (or could of depending on your level of Facebook usage) been a turning point but the Pens took that blow, killed off the penalty and were rewarded with a power-play of their own.

Bryan Rust has been red-hot lately but let’s call it what it is, this power-play goal was an absolute thing of beauty.

First and foremost – Galchenyuk does a good job of pulling two defenders low as he circles around the net, allowing the likes of Malkin, Rust, and Guentzel to set up shop in their positions in the umbrella.

Then, as Galchenyuk cuts to the middle, he frees up space for Geno to take a half pass-half shot low to Guentzel.

Guentzel, you know the guy everyone said was just a product of Crosby and not actually talented, tries to bump the puck to the slot to Galchenyuk and Rust reads the play perfectly. He sees Galchenyuk is tied up, gets to a loose puck and wires one home.

Just about five minutes later the Penguins would add to their lead.

Unlike the power play, this is making the best of what you got.

Dumoulin would try to spring Kahun but the Islanders read the play. Kahun attempts to get the puck on net but it goes wide.

Tanev, ever making us look like absolute assholes, barrels in on the forecheck and takes Nelson out of the play. This gives McCann a chance to scoop up the loose puck and work it to Marino at the point.

Marino shows great awareness and gets it on net as the Islanders are pressuring high.

Puck hits Tanev’s stick, eludes Varlamov and the Pens are up by a pair.

That narrative, however, would flip in the middle frame. When all was said and done, after 40 minutes, the Penguins would have a CF% of 56 and the Islanders scored two themselves this time. Spoiler.

Islanders would get on the board just under three minutes into the period.

Anthony Bleu Cheese, or however you spell that circus of a name, makes a smart play after being pushed out of the front of the net by Riikola and gets to a soft spot with his stick down.

Because Riikola has to respect Leddy skating down the wall, he loses sight of Anthony Bullbythehorns, and Leddy slides an unrealistic pass to him and he makes no mistake from point-blank.

Did you think the Islanders were going to go away?

Did you think this woe begotten, miserable set of absolute pricks would disappear and call it a night?

Of course that didn’t happen because existence, boys and girls, is pain.

He had two assists tonight and reminded us of his existence.

This was not Marcus Pettersson’s finest moment.

First, he tries to gently dump the puck into the zone and doesn’t get enough on it. Leddy intercepts his attempt and sends it right back to him.

Pettersson then attempts to hit Kahun with a pass and it’s picked off by Brassard.

Brassard, emotionally-engages the puck into the offensive zone, curls up the wall and hits Leddy coming late.

Leddy fires one on net and to be honest, hits Nelson’s stick more than I think Nelson meant to tip it.

Did you think the Pens were doomed at this point? Don’t lie, it’s almost Christmas and if you lie you’ll be forced to watch an overrated sketch comedy show on repeat for days.

Here’s one thing none of us should ever question again – Brandon Tanev behind the net.

You wanna chase him behind there? Go for it. You aren’t winning.

Tanev would absolutely abuse Pelech behind the net and work the puck out to Kahun who get the puck to Pettersson for a shot that went wide.

This is where we may have to call the cops for abuse.

Tanev again wins a puck race and goes old school. He goes right at Pelech in a wraparound attempt and stuffs it home off of his skate.

Shake it off, Pelech, he’s made us all look dumb thus far. Join the club.

Pull ahead and shut it down, sounds easy enough.

Before we break down the goals of the third and overtime, let me just say, I am not old enough to truly remember the heartbreak of David Volek.

Hell, I am old enough to remember this club in 2013 showing us how easily a Flower can wilt and die under some pressure.

This goddamn franchise, aside from the 80s has been nothing but misery and despair and yet, they continue to torture us.

On that happy note, the power play thanks to Jake “Actually Bad, Just A Leech On Crosby’s Wing” Guentzel would get their second goal of the evening. Yes, even in this economy.

A broken play would lead to the Islanders somehow leaving Guentzel open in the middle of the ice with a clear lane.

Galchenyuk recognizes this, floats a pass Guentzel takes off his skate and buries past Varlamov to restore the Penguins’ two-goal lead.

Huh, I can think of a certain Dominik on the Pens roster that’s been doing the same thing for about two years now and gets obliterated for not scoring but I’ll just sip my tea and move on.

With under five minutes remaining and the Islanders on a power play, the Penguins could’ve put the nail in the coffin but the Islanders wouldn’t let it happen.

ZAR would sprint down the wing determined to make up for the disallowed shorthanded goal in the first with Lafferty out of a cannon down the middle. Islanders broke up the play and headed back the other way as the penalty expired and brought us back to five-on-five hockey.

Once they gained the zone, Eberle would shake off not one but two Penguins while cutting to the net and this would cause just about every Penguins skater to fixate on him, leaving Josh Bailey wide open in the slot.

Eberle, who I swear to the old gods and the new only puts up points against the Penguins, finds Bailey and bang biscuit. It’s a one-goal game again. Buckle up your infants.

With two minutes left, Barry Trotz pulled Varlamov for the extra skater and you could just feel it, right? We were going to overtime.

Some nice puck work between Brassard, Leddy and Pulock helped by a perfect screen by Clusterfuck would give us an even game and send us to OT.

Guess who didn’t get a shot in overtime!

You were right! Between the third period and overtime, the Penguins were outshot 22-6.

One could say that is “bad” and you don’t need Viz to back that up, bub.

Jake Guentzel turns the puck over in what many coaches refer to as “the gray area” a couple feet inside the defensive blue line. Brock Nelson strips him of the puck and passes to Anthony Boilerplate who takes a pretty innocent shot that sneaks through Murray’s pads.

It appeared ready to die on the goal line but the Pokemon trainer Brock Nelson would bang it home and we’d be done here.