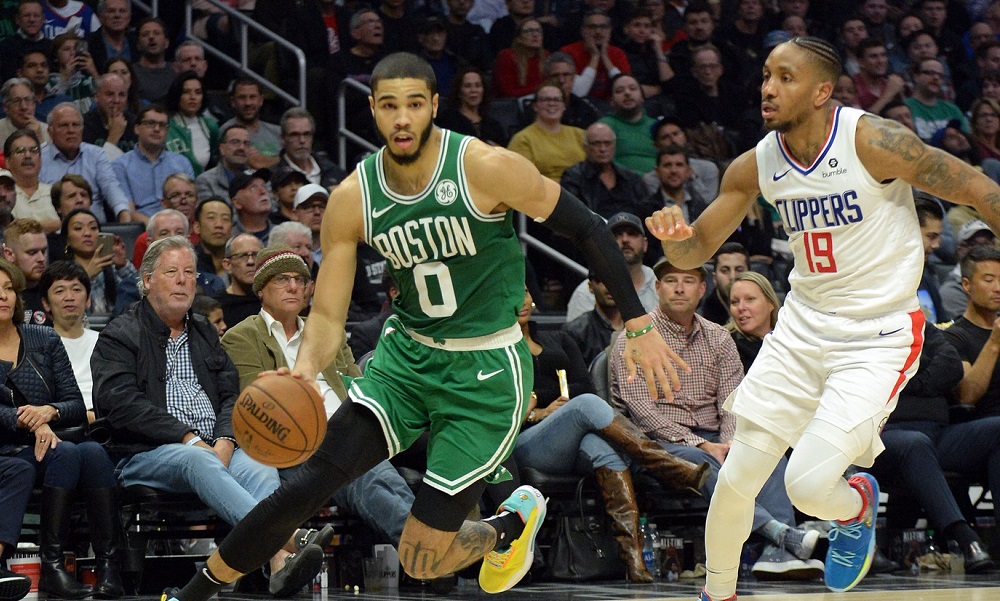 If you read last night’s Rapid Recap, you know how the Celtics lost to the Clippers, and if you read today’s Morning Dump, you know why that result is still reason to be encouraged. Now let’s dig a bit deeper.

On this road trip, Jayson Tatum is doing what we expected: playing like a cold-blooded stud. He’s capable of taking over a game – such as making 4 threes while tallying 14 points in the third quarter – and making the clutch shot.

Shoutout also to Daniel Theis. Last night he scored a mere 8 points but racked up 14 rebounds – including 7 offensive boards that helped key Boston’s 14 second-chance points. Theis even added 6 assists and 3 steals. On this trip, he’s averaging 7.3 points and 10.5 rebounds while shooting 52.2%. The front line has its issues, but Theis has been the best of the bigs by far this season.

Kemba Walker was lights out through the first 10 games of the season, but on this trip he forgot to pack his jump shot. He’s averaging only 16.8 points in the four games on 35.8% shooting, and just 22.6% from the arc. Last night he struggled mightily, making just 4 of 17 and committing 6 turnovers. Kemba had a brief spark in the fourth, swishing two triples, but scored just 1 point in overtime.

Marcus Smart has been so good on defense on this trip that I don’t want to criticize him for offense, but it has to be said: his three-point shooting, which was awesome before the road trip (after 10 games he was at 41.2%), has regressed badly (26.3% in the last four). Last night from deep he was 1-11; he went 3-10 and 1-8 the two before that.

Jaylen Brown has scored fewer points each game as the trip has progressed. Last night he shot just 3-14 for 9 points, his first time in single digits since opening night.

The Celtics can still return home with a winning road trip, but they’ll need much better numbers from all three guys on Friday in Denver.

The fouls and free throws were pretty even, but the Celtics nevertheless got a bad whistle. This was especially true late fourth quarter and in overtime, when the LA comeback was boosted by some crucial calls that could’ve gone Boston’s way. In a game with 18 lead changes and 7 ties, that mattered.

Here’s one where Paul George got away with a push-off, then Jaylen Brown was called for a touch foul. Brad Stevens challenged the foul, but even with replay it was not overturned due to a technicality.

Coach’s Challenge (BOS): personal foul on Brown in Q4 of #BOSatLAC. Ruling: Unsuccessful challenge, foul stands (officials determined contact by George to Theis occurred prior to the gather, therefore was not tied to the play and not reviewable under Coach’s Challenge criteria) pic.twitter.com/2u8jHBLNRX

Maybe the challenge rule is poorly written. Or maybe the refs should’ve seen George’s offensive foul in real time – everyone else did. Instead, George went to the line and made the second free throw, after he missed the first because the Ball Don’t Lie.

Next was this blocking foul on Kemba that sure looked like a charge. Listen to the disbelief from the ESPN announcers.

"Inside the restricted area" pic.twitter.com/GAF7axBc8b

They gotta overturn it lol that shit was obvious

No, Riffsman, they did not. The Clippers retained possession and made a three that put them in control at 103-99. The error was compounded when Brad got hit with a technical for complaining about the blocking call. The Celts never recovered.

So the Ref gives Brad Tech because he blew the call?! 🤔

there's nothing i hate in the NBA more than when refs get clear calls wrong and then call technicals when coaches rightfully complain.

By the way, the JB and Kemba fouls and Brad’s T were all called by the same ref – not Marc Davis, AKA the man who gave Brad his first ejection several years ago, but Nick Buchert, a young ref who seems destined to torment us far into the future.

Back to the court: Even when a missed call went in Boston’s favor, they somehow got the short end of the stick.

It was that kind of night.

While we’re ranting about refs and rules, here’s one more baffling incident from the fourth quarter. (scroll down)

and here it is. on national TV for yall to see. the worst rule ever.

The league was supposed to be fixing this rule so that the team that commits the intentional foul doesn’t benefit from it. Whatever they may have done didn’t work, that much is … clear.

Red’s Army co-founder John Karalis, now a beat writer with masslive.com, had an interesting postgame encounter with Beverley (apparently impersonating Russell Westbrook). Those locker rooms are dangerous on the road.

Here's the exchange I had with Beverley https://t.co/5sGz6Sgetk

No word on whether John asked a follow-up about Smart being first team All-Defense and Beverley not.