Three takeaways from the Islanders' OT victory over the Penguins 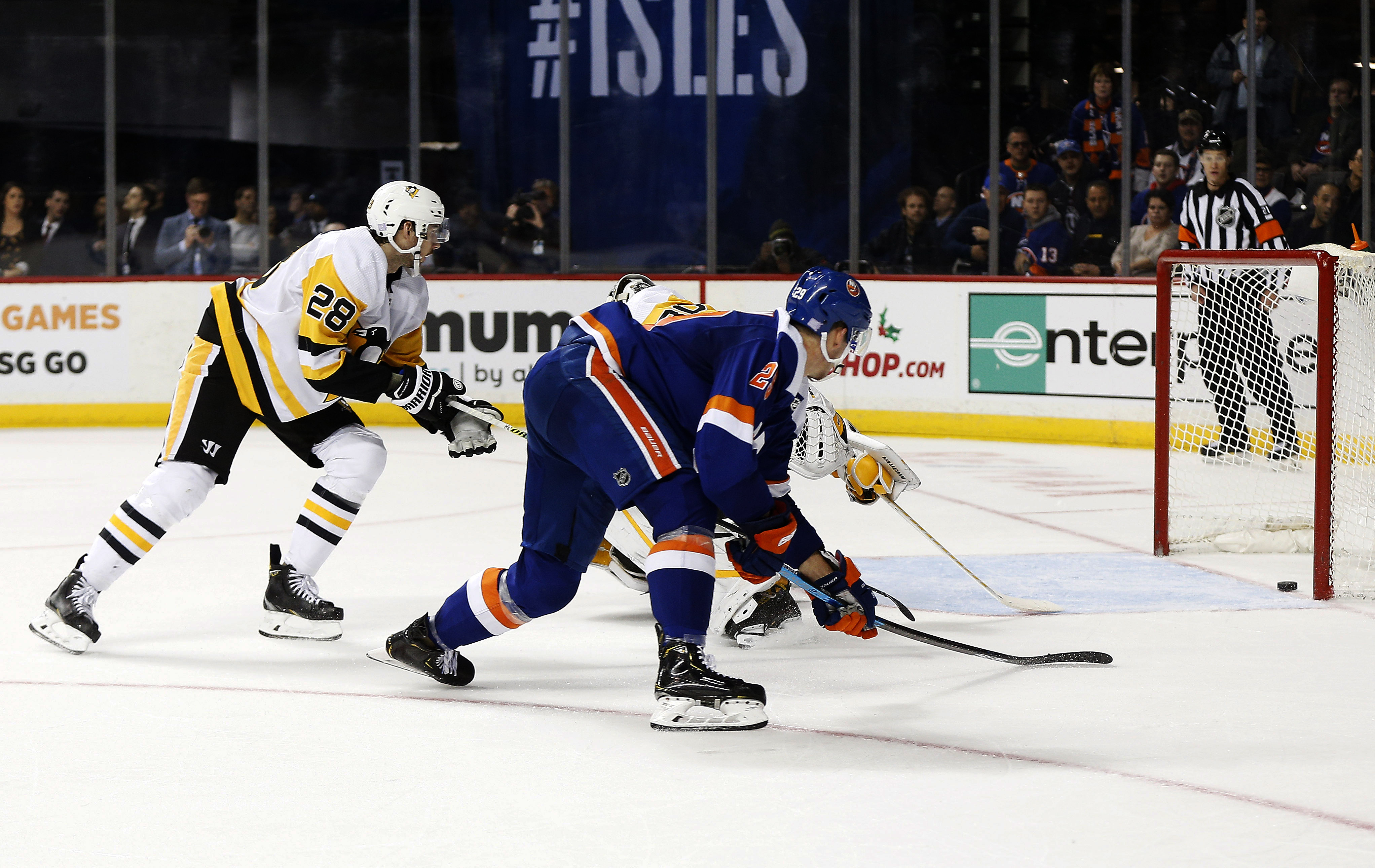 Three takeaways from the Islanders' OT victory over the Penguins

NEW YORK — The Islanders made history on Thursday night in their 4-3 overtime win over the Pittsburgh Penguins. New York extended its point streak to 16 games, which was a new franchise record.

Brock Nelson scored the game-winning goal by sliding the puck by Penguins’ starter Matt Murray with 43.5 seconds left in OT. The goal was Nelson’s second of the night, which included a power-play goal at 15:08 of the third period to give the Islanders a 3-2 lead.

Scott Mayfield and Anthony Beauvillier also scored for the Islanders in the win, while Thomas Greiss made 23 saves in the win.

Below are three takeaways from the Islanders’ win over Pens:

If you didn’t know the Islanders were on a franchise record-setting streak you’d never have guessed it by the tone inside the dressing after Thursday’s win. Sure. “Higher Love” by Whitney Houston blared from the room, but the talk after the game wasn’t so much focused on the 16 game point streak.

Instead, it was focused on what the Islanders needed to do better and learn from their overtime victory.

The Islanders certainly didn’t get off to the start they were hoping for in the first or second period on Thursday. Their shots were limited early and they fell behind quickly in each of the first and second periods.

Still, they managed to rally and overcome a blown lead in the third period to secure the win, For some teams that might have been enough to hang their hats on.  For the Islanders, not so.

“The great thing about these situations and these moments is this group understands that they’re learning moments,” Islanders coach Barry Trotz said. “They’re not like, ‘oh well we still won.’ They think higher than that. They think ‘hey, it happens again we got this. we’re going to lock this down.’

“They come to work, they come to compete every night and they give you their best effort. That’s the Islander way. It’s a reflection of the way we play, the people we have and the community we live in.” – Barry Trotz pic.twitter.com/0qGIJ2Gw5r

An overtime winning goal and a record-setting point streak are two things that will make this game unforgettable for Nelson. The 28-year-old was already appearing in his 500th NHL game on Thursday night, a milestone that is memorable to any NHLer, but add the events that took place in it and that’s one Nelson won’t soon forget.

“You’ll remember milestones. First game, first goal and then 500th the way it played out it will be something you remember for a while,” Nelson said. “Right now it’s a big win for us to kind of keep (the streak) alive.”

Nelson’s mother and wife were on hand to see the milestone take place. His mother turned out to be a surprise guest in the crowd.

What Nelson’s family and the rest of the 13,212 on hand had the chance to witness was another strong effort from Nelson. The Islanders’ forward recorded a pair of goals that tied him for the team lead with eight and he extended his point streak to five games.

Nelson also had his second straight multi-goal game and had the game-winner in overtime on Tuesday night in Pittsburgh.

“It’s really fun playing with (Nelson),” Beauvillier said. “He’s a good player, he always seems to be at the right place at the right time and making good plays. Obviously, his shot is deadly and I’m happy for him. Five hundred games and two goals, with the OT winner back to back games I don’t he could have drawn it up any better than that.”

Nelson wasn’t the only Islander stepping up in a big way on Thursday night. Beauvillier racked up his sixth goal over the last four games in New York’s win over the Penguins. The 22-year old forward had back to back multi-goal games against the Toronto Maple Leafs and Philadelphia Flyers, which included a pair of big goals against the Flyers last Saturday.

Beauvillier kept that going on Thursday, scoring to tie the game at two in the second period with the Isles on the power play.

“We stick with it even if it’s not our best start. We find ways to win. Lots of character. Lots of leadership.” – Anthony Beauvillier pic.twitter.com/qwIj4TiJ3d

The Islanders’ forward had gone 13 games without a goal before he started to pick things up. Still, even during that stretch, his teammates felt he had been doing plenty of things well.

“Even when he wasn’t scoring he was playing pretty well,” Nelson said. “He was getting chances and hitting posts and different bounces, which is going to happen. All year he’s been a key guy offensively for us. He’s playing aggressive, smart with the puck, making good plays and he’s attacking.

“When he’s doing that he’s dangerous.”