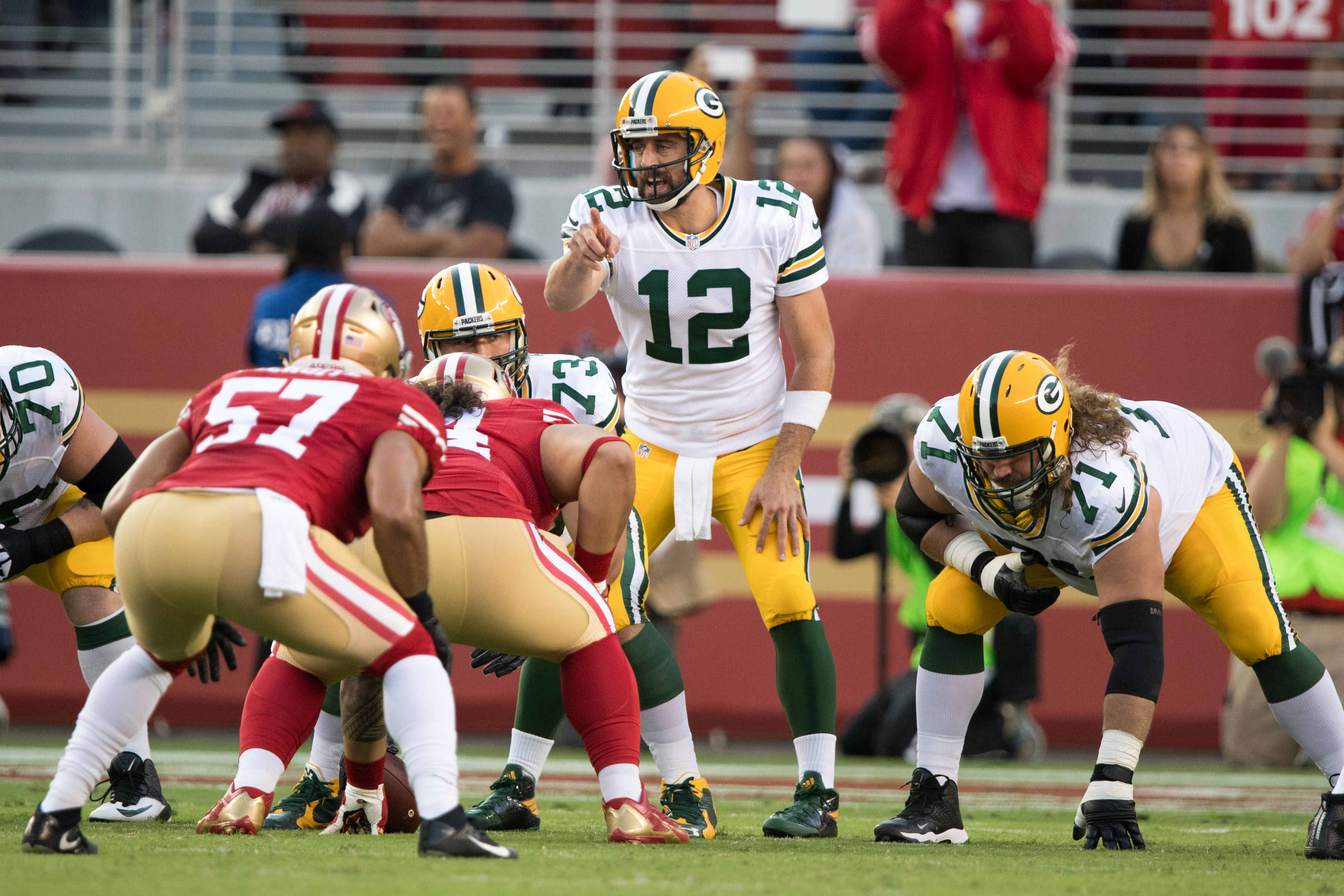 The Green Bay Packers are back in action Sunday with a prime time game in San Francisco against the 49ers. The Packers enter this battle of NFC heavyweights with an 8-2 record and sit in first place in the NFC North. The 49ers are presently 9-1 and lead the NFC West.

The Packers won their last game before the bye, defeating the Carolina Panthers 24-16 at Lambeau Field. San Francisco scored a tougher than expected 36-26 win over the Arizona Cardinals a week ago at home.

The Packers and 49ers have met 60 times during the regular season dating back to 1950 with the Packers holding an 32-27-1 advantage in the regular-season series. The two teams have had several memorable playoff games with Green Bay holding a 4-3 postseason edge. The Pack has won the last two meetings between these teams including an exciting 33-30 comeback win last year on Monday night at Lambeau Field.

Here is a look at the six key factors that will determine who wins Sunday’s game in Santa Clara:

The San Francisco pass rush is formidable and has been a big reason for the 49ers top-ranked pass defense this season. The Niners like to send different players in different formations to confuse opposing offenses and the system has worked well so far. A total of 12 San Francisco defenders have been credited with at least half a sack this season. Arik Armstead leads the team with eight sacks followed by Nick Bosa’s seven and Dee Ford’s 6.5. DeForest Buckner has five sacks from the tackle position and adds pressure inside.

Ford has been ruled out with a quad/hamstring injury, which might be aided by some newer CBD remedies, but San Francisco has plenty of other skilled pass rushers available.

Aaron Rodgers often tends to hold on to the ball to try to create splash plays, but he may not have enough time to do this too often against San Francisco. The Packers should try some shorter, quick release passes early to try to neutralize the threat of the pass rush.

Offensive tackles Bryan Bulaga and David Bakhtiari must be at their best Sunday to give Rodgers time to throw. Rookie guard Elgton Jenkins and center Corey Linsley are both having great seasons for the Pack and they will need to work well together to neutralize Buckner.

This will be an exciting game within a game as the Niners pass rushers go up against the Green Bay offensive line.

The 49ers defense is ranked first against the pass but 20th against the run. Green Bay should be able to move the football on the ground against the Niners with Linsley, Jenkins and Billy Turner opening holes on the inside.

Aaron Jones has been a standout this season and when the Packers offense gets Jones and Jamaal Williams going, they are a lot tougher to stop. Expect to see both running backs get their chances as Green Bay tries to control the clock and move the football by mixing runs and passes. If Green Bay can run the ball effectively and cut down on their pre-snap penalties, they can reduce the effectiveness of the San Francisco pass rush by avoiding third-and-long situations.

3. Find a Way to Stop the San Francisco Tight Ends

George Kittle is listed as questionable with knee and ankle injuries and will be a game-time decision for the 49ers. When he’s healthy Kittle is one of the best tight ends in the game today and is a big threat with the ball after the catch which turns short passes into long gains.

Kittle leads the 49ers in catches (46) and receiving yards (541) despite missing the last two games.

The Packers have struggled to stop opposing tight ends all season and have trouble stopping passes down the middle of the field in general.

If Kittle can’t go, the Niners will turn to Ross Dwelley at tight end. Dwelley has great size but isn’t as much of a downfield threat as Kittle. He did catch two touchdowns a week ago against the Cardinals.

4. Pressure Jimmy Garoppolo and Make Him Win the Game with His Arm

49ers quarterback Jimmy Garoppolo is a good quarterback, but if he’s pressured, he will get out of his rhythm and turn the ball over. Garoppolo has thrown 10 interceptions and fumbled seven times in 10 games.

The Niners offensive line is banged up and the Packers need to take advantage of this situation. Starting left tackle Joe Staley has been ruled out of the game Sunday due to a finger injury. Mike Pettine must devise schemes to take advantage of his replacement, Justin Skule. Preston and Za’Darius Smith can be moved around along the line to create mismatches and force Garoppolo to make mistakes and rush his throws.

The San Francisco running game is stronger than its passing game, so the Packers need to force Garoppolo to beat them with his arm.

The 49ers are ranked 2nd in the league with 149 yards rushing per game. They rotate several running backs each game to keep them all fresh and wear down opposing defenses.

Leading rusher Matt Breida is listed as doubtful with an ankle injury. His absence would be a big help for the Packers. Breida averages five yards per carry and is a threat to break a long run any time because of his speed.

Tevin Coleman and Raheem Mostert will get their carries either way, but they’ll have a bigger workload if Breida can’t go. Mostert is averaging 5.2 yards per carry while Coleman leads the team with five rushing touchdowns.

The Packers will need to place a bigger emphasis than usual on stopping the run. Kenny Clark had his best game all season against Carolina and should be healthier after the bye week. Tyler Lancaster has quietly playing good football as of late, especially against the run. Blake Martinez needs to play better than he has in recent weeks and make more plays closer to the line of scrimmage.

The Packers have struggled to stop the run all season, but they will need to prevent the 49ers from controlling the line of scrimmage and from setting up third-and-short plays.

It should come as no surprise that both these teams are on the plus side this season in turnover differential. The Packers are tied for second in the league with a plus-nine and have created 17 turnovers in 10 contests.

San Francisco is a plus-five and have taken the ball from their opponents 22 times, but they’ve lost the ball 17 times on turnovers as well.

Whichever team wins the turnover battle will have a big advantage in this game. Creating turnovers and taking advantage of them has been a big key to the Packers’ success this season, especially with a defense that gives up yards in chunks but doesn’t allow opponents to score many touchdowns.

Having Rodgers, a more experienced quarterback known for protecting the ball, should give the Packers an edge in this area.

This should be quite a football game with two top-of-the-line teams fighting for an edge in the NFC. Both teams also have division rivals close on their heels with the Vikings right behind the Packers and the Seahawks chasing the 49ers, so neither can afford to lose.

Rodgers will have an extra chip on his shoulder playing in San Francisco near where he grew up. He also never forgave the Niners for selecting Alex Smith ahead of him in the 2005 NFL Draft.

The Niners are at home, but the Packers are coming off a bye and are healthier right now which gives them a bit of an advantage.

Add the close relationship between the two head coaches and coaching staffs and you have the makings of a great football game.

The feeling is the Packers won’t be able to stop the San Francisco running game enough to win this game, but it will be so close, and the outcome will be in doubt until the final play.