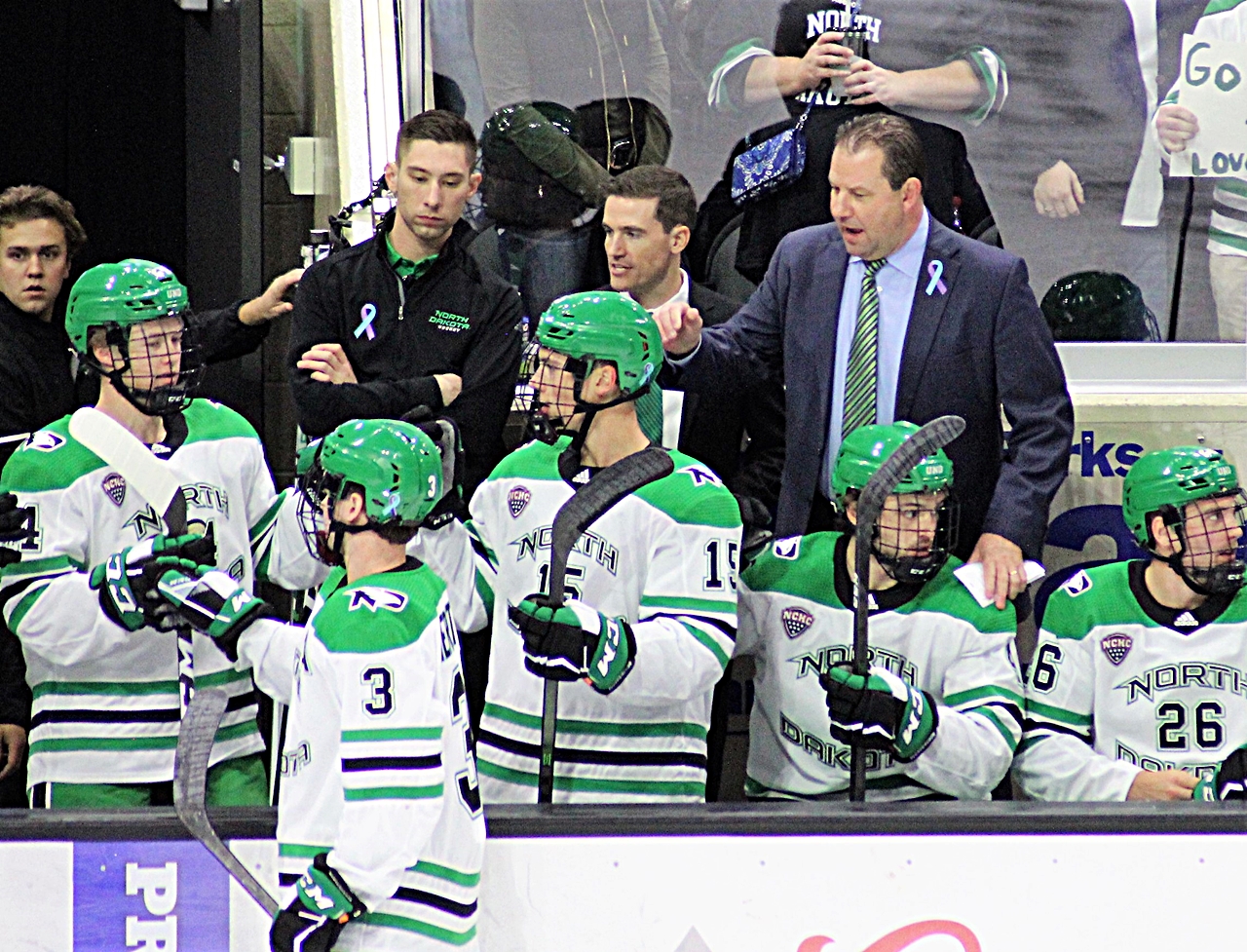 Last March, the University of North Dakota hockey team’s season ended in Denver. When the final horn sounded, the Hawks had missed the NCAA playoffs for the second year in a row. Fans were antsy and unimpressed with the season’s results. Some in the UND fanbase called for the immediate firing of the head coach Brad Berry. Yes, that happened.

During the offseason, coach Berry made some changes. He didn’t re-sign assistant coach Matt Shaw. Instead, Berry hired former UND All-American goalie Karl Goehring.  Also, Berry challenged the Hawks players to work harder and to be more focused. Words like accountability come to mind. It wasn’t all fun and games during the summer.

“Like Schmidty (Cole Smith) said a couple of weeks ago, it was a salty offseason,” junior defenseman Gabe Bast said during an early-season press conference. “This year, we’re really trying to establish a swagger to our group and play with confidence every night and just believe in ourselves that we can get the job done.”

The players heard the noise during the offseason. They took it to heart. They refocused. They worked harder. They held each other accountable. They know what’s at stake.

“Anytime you play here, you get outside noise coming in,” sophomore goalie Adam Scheel said. “But Bubbs, the coaching staff, all of us, we know what we got in that locker room. We got a really good team. I think we got a really good shot at this year. I think we’ll be up there with the best of them.”

“I think it’s something you acknowledge for sure,” senior defenseman Colton Poolman explained during a pre-season interview. “You don’t dwell on it. You learn something every year there’s no question about it, but it’s a fresh year. It’s a fresh start. A new team new feel. Our work ethic from last year has got to be no question this year. That’s got to be step number one. It comes back to execution and mentally.”

During the hockey media day, I asked senior grad transfer, Westin Michaud, if he’d heard the noise on Twitter and social media? He had. Coming into a new program, he knew the expectations.

“It drives everyone,” Michaud said. “At the end of the day, everyone wants to win. That’s on us to be the best we can be every single day. We know we have to get better.”

With the 4-2 win, the Fighting Hawks are 8-0-0 on home ice.  Moreover, dating back to last season, UND has now won 10 games in a row at home. UND is also unbeaten in eight games going 7-0-1. According to Brad Schlossman, if UND wins tonight, they would have a perfect home record going into the Christmas break for the first time since 1964.

To start the season, UND struggled on the power play, they were near the bottom of the NCAA rankings. Recently, the Hawks fortunes have changed on the man advantage. In the last five games, UND has scored at least a goal on the power play in each game.

Make no mistake about it, the 2019-20 UND hockey is vastly improved. The statistical difference between the two squads is staggering. Last night, I had a conversation with fellow blogger Scott Wasilewski about the difference between the two teams. It’s not even close. You can see it on the ice, but when you put on paper, the differences jump out. IMHO, this team reminds me a little bit like the 2015-16 team.

Here’s my question; are the fans that soured on coach Berry last season, now on board? What changed?