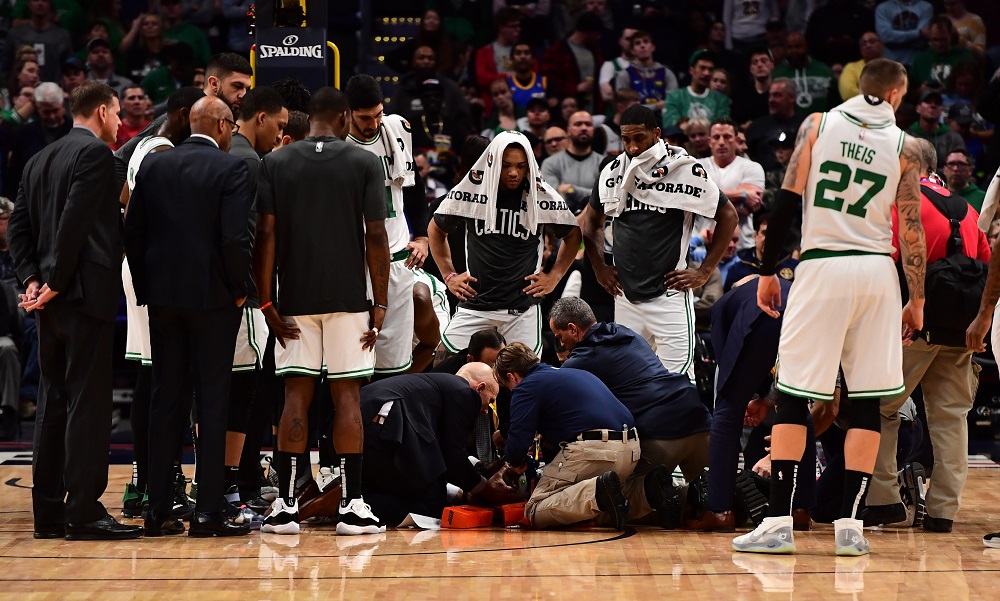 The Celtics lost and Kemba Walker was injured, but this morning the news doesn’t seem as bad as last night. It appears Kemba avoided a devastating injury.

At tipoff, the Celtics were concerned about one thing: finishing their road trip with a winning record. By the middle of the second quarter, they had something more important to consider.

Kemba Walker was taken off the court in a stretcher after this play pic.twitter.com/i1jcJeoDwB

This is terrifying… poor Kemba pic.twitter.com/k1e1vTfoqo

As Kemba Walker was being carted of the court I can say his eyes were open and he was blinking. Still waiting on an official update from the #Celtics 🙏🏾@NBCSBoston #NBA

It’s a frightening scene whenever a stretcher is needed on a basketball court. A head or neck injury is especially scary because of the potential severity. When early word came from the Celtics, supported by a Woj report, there was some sense of relief.

Early indications are that Boston’s Kemba Walker did not suffer a significant injury in collision tonight, league source tells ESPN. Team has diagnosed him with concussion-like symptoms. https://t.co/Qu2LMTDwaW

#NEBHInjuryReport Following testing at a Denver hospital, Kemba Walker has been released to rejoin the team for its return to Boston. He will be re-evaluated tomorrow and further updates will be provided as appropriate.

The Celtics made the announcement just past midnight local time. It’s a very positive development for Walker, who has been initially diagnosed with concussion-like symptoms.

“All the scans that he went through at halftime yielded good results,” Brad Stevens said after the game. “I saw him in the ambulance at halftime that took him to the hospital and he had his wherewithal and was in decent spirits, which was good, obviously.”

Something we can all be thankful for.

On Friday in Denver, the Wounded Coyote Celtics emerged for the first time, and it was inspiring.

The Celtics rallied from 19 down in the fourth quarter without Kemba Walker in the finale of their west coast road trip, but the Nuggets made just enough shots down the stretch to hold on for a 96-92 victory. Boston fought back without Kemba Walker (concussion-like symptoms) in the fourth quarter, opening the frame with a 16-5 run to chip away at a double-digit Nuggets lead. Jaylen Brown had a team-high 22 points while Jayson Tatum (16 points) and Brad Wanamaker (14 points) helped the C’s breakthrough against a Nuggets defense that had stifled Boston’s offense all night.

The rally was not enough down the stretch however as Jamal Murray delivered a game-high 22 points including a couple key buckets late. Nikola Jokic also delivered a triple-double to help the hosts win their fourth-straight game. Boston falls to 2-3 on the road trip with the defeat, with all three losses coming by a combined eight points. The C’s will now wait for more news on Walker as they head home to Boston with a couple off days before facing off against the Kings on Monday night.

The Celtics had every reason to quit in this game. Last game of the grueling five-games-in-eight-nights road trip; everyone wanting to get home; playing in the thin air of the Mile-High City; and shots not falling. Then suddenly they were also suffering the trauma of seeing their teammate go down with a potentially catastrophic injury.

They did the opposite of quitting. They found new energy, forced Denver turnovers, and pulled together to twice get within a single point of the lead. The Nuggets regrouped and made a couple of clutch shots to avoid a complete collapse. Although the Celtics lost, they had showed their true grit.

Finishing the trip with a 2-3 record isn’t great, but the way the Cs fought back last night made the result a bit easier to accept. They are playing hard and sticking together. Furthermore, with a better bounce here and a different call there, it might’ve been a 3-2 or 4-1 record on the trip.

If the Celtics stay in Wounded Coyote mode, the wins will come.

.@Scalabrine reaction that Kyrie will not be coming to Boston with Nets due to shoulder injury 👀☕ pic.twitter.com/UfJ6AGuvKZ

Herald: Celtics’ Marcus Smart offers praise — and a strong response — to Patrick Beverley  |  Gordon Hayward back shooting as he rehabs from broken hand