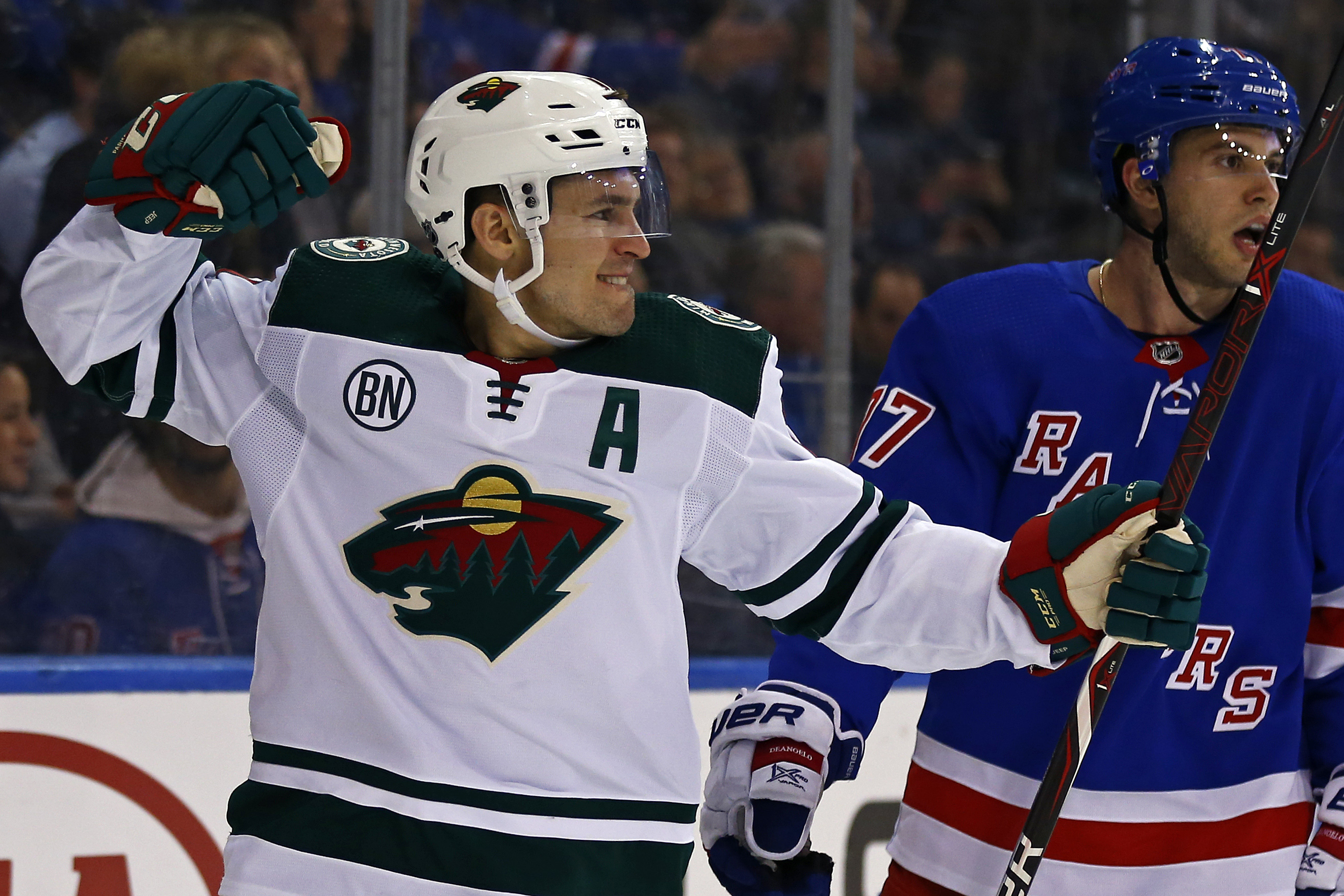 In my last post-game article, I talked about deja vu and how the script didn’t play out as it normally did when the Wild won a tight, 3-2 game over Colorado.  Then deja vu did happen as Minnesota squandered a 4-2 lead with less than 5 minutes left in their game against Boston to lose 5-4 in overtime.  It was a classic Wild collapse as a series of quick strike goals tied the game and then in overtime Minnesota again appeared inept as Torey Krug literally skated through 3 defenders for the game winning goal.  Ouch.

The New York Rangers are also familiar with this scenario, but they were spoiler not the spoiled.  The Rangers had a dramatic come-from-behind road game against Montreal.  New York has made no bones about the fact they needed to rebuild and by stockpiling picks and some savvy drafting they are showing a lot of promise despite their mid-ling place in the standings.  Can the Wild regroup and earn a victory over New York tonight?

1st Period Thoughts:  With the Madison Square Garden crowd serenading Mats Zuccarello with cheers from the home crowd who seem to be thrilled he’s back.  Hate to say it but I’ll be using impressions again as I only have radio to follow the game.

Great defensive play by Suter to stop a chance for Strome

#MNWild to the PP for the first time tonight. Boo Nieves called for slashing.

A slashing penalty on the Rangers’ Boo Nieves gave Minnesota its first power play of the game.

Mats Zuccarello with a nice feed on the power play to create a good scoring chance, but no luck. pic.twitter.com/B6VGU0kttW

Minnesota comes up empty on the man advantage, but the Wild continued to pepper Henrik Lundqvist with shots early on.

Great shift by the Wild after PP....Spurgeon redirection off crossbar tho...Lundqvist sharp early...Robbery on Zucker a few minutes ago, 8 saves 6 minutes in

Standing ovation for Zuccarello after his tribute/welcome back video. After waving to the crowd and tapping his chest, he hops over the boards and does a small skate as he continues to wave to the crowd.

What an emotional sequence.

The Wild would put the Rangers’ on the power play as Kevin Fiala takes a roughing penalty.

Fiala gets a roughing minor

#NYR score but goal is immediately waved off.

Chris Kreider slashes Jonas Brodin's stick in half to negate a goal. We will have 4 on 4 and then a brief #MNWild PP.

Wild luck out with Chris Kreider‘s slash on Jonas Brodin to waive off the goal which kept the game at 0-0.

Rangers think they scored on the power play, but Kreider takes a slashing penalty just before the puck goes in the net. 4-on-4 hockey. pic.twitter.com/jY7g7rnNaw

Ryan Donato turns the puck over and Alex Stalock has to make a couple of saves to keep this thing scoreless. #MNWild

Rangers get a glorious chance, but Stalock makes the big stop. pic.twitter.com/V8EOHAwm57

1-0 Rangers. Zuccarello was without a stick, Lakeville's Brady Skjei recognizes it, centers himself and wrists a whistler....

Zuccarello loses his stick and Brady Skjei scores as his wrist shot threads the needle to make it 1-0 Rangers late in the 1st period.

GOAL. Brady Skjei easily gets around Mats Zuccarello, who didn't have a stick, and beats Alex Stalock to open the scoring. pic.twitter.com/A7Ykt8EqNZ

In what looks like a very winnable game, #mnwild down a goal after 1....12-9 Wild on shots

Not a ton of scoring chances for each side, but the Rangers certainly were better in the 2nd half of the period than the Wild were.  Minnesota had to feel a little fortunate to only be down by one with one Rangers’ goal waived off so far.

2nd Period Thoughts:  The 2nd period would begin with Minnesota trailing 1-0.  Rangers apply pressure early and draw a penalty in the process.

Jordan Greenway called for interference. #MNWild to the PK.

Nice defensive play by Jared Spurgeon to disrupt the 2-on-1 feed. pic.twitter.com/0ZEAntDNJt

Eriksson Ek with a one-timer on a feed from Greenway, who came out of the penalty box, but Lundqvist slides over in time to make the pad save.

#mnwild hemmed in its own zone, finally gets an icing. #NYR with the pressure right now.

GEEK Squad just got worked out in their own zone for what felt like a decade. Matt Dumba ends the dreadful sequence with a crosscheck. #MNWild to the PK.

Wild getting outworked and fatigued in the process and it leads to a Rangers’ power play.

Huge kill for the Wild despite being hemmed in their zone for basically the whole power play.

1-1. Zach Parise from Kevin Fiala. What a pass. And we have ourselves a ballgame.

#mnwild work the puck around, Fiala shows strong patience before feeding Parise back door for the shot. Lundqvist gets a piece but not enough.

The Wild strike late in the 2nd period as Zach Parise buries his 9th goal of the season on a set up by Fiala.  Huge goal for a team that seemed to be lacking confidence and fire much of the period.

Not a bad recovery for a Wild team that looked like it was on the ropes on a few different occasions during the period.  Knotted at 1-1, anyone’s game.

Henrik Lundqvist robs Jason Zucker of a goal, and in turn, his best bud Mats Zuccarello of an assist. #MNWIld

Wild get a 2-on-1. Good decision by Jason Zucker to go for the shot, but Lundqvist robs him with the glove. Fantastic stop. pic.twitter.com/git14X9i4s

Boudreau marching down the bench clapping his hands....After the Boston meltdown and some of these long, overextended shifts tonight, he knows the #mnwild need this game with a game tomorrow night

Ryan Donato goes bar down for a huge goal on a nice toe drag to give Minnesota a 2-1 lead.  If there is any player who could use some goals is Donato who has looked a bit lost this season.

Nice drag move from Ryan Donato to get this goal pic.twitter.com/g1zOaE0uhK

Holy moly. Buchnevich gets a quick shot off, Stalock makes the stop and the puck nearly hops into the net. Hits the post and bounces to the side of the net. pic.twitter.com/ZAtwjXpJie

Deja vu: #mnwild going on the PK protecting a one-goal lead late in the third period.

Collapses last time out vs. Boston. Can it hold on now vs. #NYR?

Nope. History repeats itself. Kreider ties it at 2.

Panarin was passing into the slot to Strome, but it hit Suter's shin pad and caromed right to Kreider backdoor. Stalock, who has been so good, had no chance

Late penalty, game-tying goal given up to Kreider.  Eerily similar to what happened at Boston on Saturday.  Cue that deja vu feeling again…

Maybe the #mnwild should pull the goalie

My Gawd, the #mnwild get to overtime by the skin of their teeth

Overtime Thoughts:  If you are a Wild fan and you are feeling confident after another 3rd period stumble about this club’s chances in overtime you are a tremendous liar.  Here we go again…

Same script as last time, as #mnwild falls 3-2 in overtime to #NYR.

So just 32 seconds in, Anthony DeAngelo flies by Ryan Suter and scores to give the Rangers a 3-2 victory.

I really don’t understand why the Wild continue to put Ryan Suter out on the ice in overtime.  Especially at the start where he’s likely going to try to skate a 2:30 shift at a minimum.  He doesn’t add to the rush nor is he a dangerous shooting threat.  His lack of quickness leaves him very much exposed with the extra ice of 3-on-3 hockey and the Wild throw away another chance at earning 2 points.  Honestly, does Ryan Suter just demand he gets to start overtime and that’s all that has to happen?

C – Sam Hentges (St. Cloud State, NCHC) ~ the sophomore forward had an assist on one shot in the Huskies’ 2-1 shootout loss to North Dakota on Saturday.  Hentges has 6 goals, 18 points, 6 PIM’s and is an ‘even’ rating in 12 games.