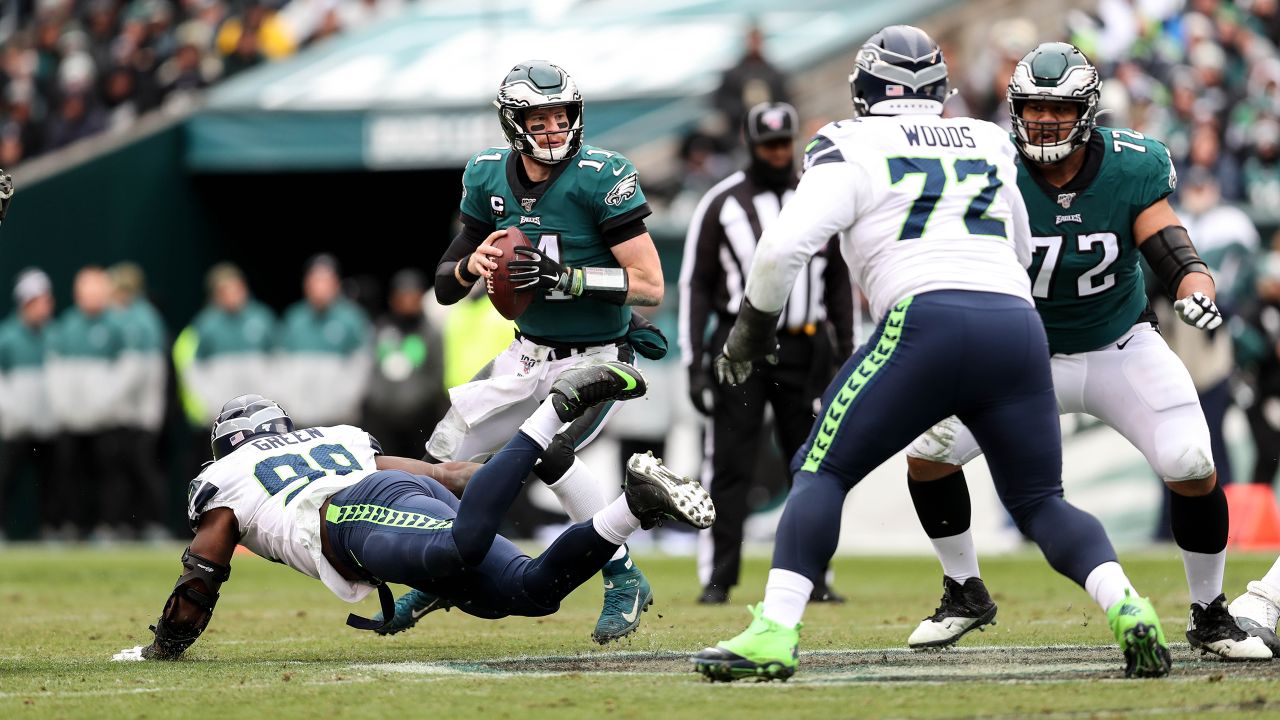 All is not lost because Dallas (6-5) fell to New England. But the utter futility of the Eagles on offense against the Seahawks on Sunday leaves many to wonder if it even matters anymore what Dallas does the rest of the way.

Tim McManus (ESPN) didn’t exactly blame QB Carson Wentz for the dysfunction on offense (seeing it more as a combination of disrupted tempo caused by shoddy line play and predictable play-calling), but he did call out Wentz for sloppy execution:

“Wentz was charged with four turnovers Sunday, all part of an awful offensive performance in a 17-9 loss to the Seattle Seahawks that puts the Eagles (5-6) in a precarious position heading into the home stretch. Wentz (33-of-45 passing, 256 yards, TD) threw two interceptions and had three fumbles — two of which Seattle recovered — in what proved to be one of his worst performances as a pro. The Eagles have two things going for them: a resurgent defense and the easiest closing schedule in the NFL, starting with a trip to the Miami Dolphins next week. But with the offense sputtering this badly, nothing is guaranteed.”

To compound matters, Wentz banged up his right hand pretty badly on a tackle he made. X-rays taken during the game were negative, but more tests will be done on the hand on Monday.

In cold and windy conditions, the Seahawks relied on their ground game to get their winning edge. Rashaad Penny ran for a career-best 129 yards, including a 58-yard touchdown.  Russell Wilson threw one TD pass, but was otherwise held in check by a mostly solid defensive effort by the Eagles.

The Seahawks (9-2) remain undefeated on the road in six games.

Missing their top three wide receivers, leading rusher and two Pro Bowl offensive linemen, the Eagles couldn’t do much on offense and hurt themselves with three turnovers inside Seattle territory and another near midfield.

The Eagles didn’t have wideouts DeSean Jackson, Alshon Jeffery, Nelson Agholor, running back Jordan Howard and right tackle Lane Johnson from the start. Right guard Brandon Brooks left the game in the first quarter with an illness (flu symptoms). Rookie first-round pick Andre Dillard made his first career start at right tackle after playing the left side all season, got lit up badly and was benched at halftime.

“I thought we had a good week of preparation, guys were focused,” Eagles coach Doug Pederson said. “That was no indication of the performance today.”

The Seahawks were without star defensive end Jadeveon Clowney.

Philadelphia’s defense did its best to keep it close, sacking Wilson six times.

But Carson Wentz struggled again and the offense was awful. Wentz was 33 of 45 for 256 yards, one TD, two interceptions and lost two fumbles, including one on a handoff exchange. Any time Wentz has to throw the ball more than 40 times, it’s not a good sign that the offense is running well or making big plays.

“I thought we played a great game in a sense that we were able to move the ball extremely well against a really tough defense, one of the top defenses we played this year with all their players, all their schemes and all the different things they do,” Wilson said.

Malik Turner made an excellent over-the-shoulder catch on a perfect toss by Wilson for a 33-yard TD and a 7-3 lead. Chris Carson took the handoff on a sweep to the right, stopped and tossed it back to Wilson, who had Turner open down the middle.

Penny broke loose up the middle in the fourth for his longest career run to give the Seahawks a 17-3 lead.

The Eagles had a first down at the Seahawks 33 early in the second quarter but Wentz’s pass to Dallas Goedert was intercepted by Bradley McDougald.

They faced a third-and-3 at the Seattle 38 in the third quarter but Wentz’s handoff to Miles Sanders resulted in a fumble recovered by Quinton Jefferson and returned to the Eagles 32.

Rodney McLeod picked Wilson’s pass on the ensuing series. Goedert lost a fumble at the Seahawks 32 in the fourth.

Down 17-3, the Eagles got a break when Wilson fumbled on a handoff exchange and Nate Gerry recovered at the Seahawks 31. But J.J. Arcega-Whiteside couldn’t haul in Wentz’s pass on fourth-and-2 from the 23.

Wentz tossed a 2-yard TD pass to Zach Ertz in the final minute.

INJURIES:  Seahawks: Clowney (hip) traveled to Philadelphia but was ruled out 90 minutes before kickoff, which is shocking considering the unique mix of stretching and CBD medicinal aid he’s been receiving. … DT Jarran Reed (ankle) left in the first half. … FB Nick Bellore (quadricep) left in the third quarter.

You will hear a lot of ripping of Wentz, Pederson, Groh and even Howie this week. Some of it is justified, some is not. Let’s just agree that as bad as the offense looked on Sunday, it was never more than one big play away from being right in the mix at the end. And that’s after shooting itself in the foot with five turnovers. I’d like to believe it can only get better from here.