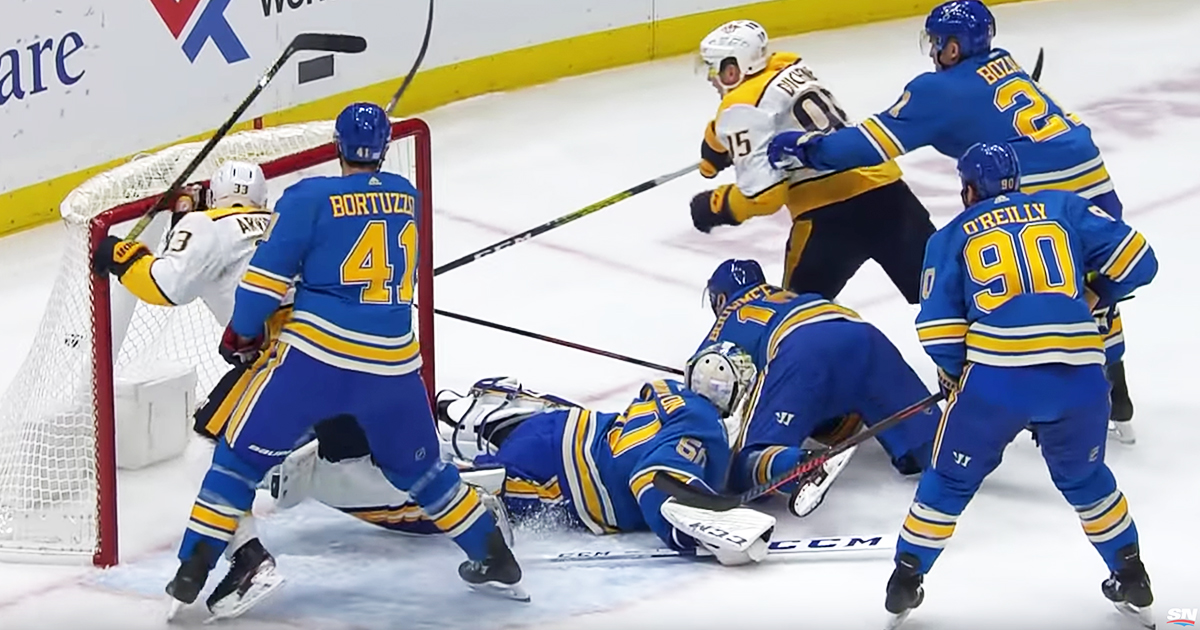 If the last week in the hockey world feels like it was 42 years long, you’d be correct.

Mike Babcock was fired by the Leafs and for better or for worse that’s the center of the hockey universe so we’ll hear unlimited takes about what it means for them, Babcock, the league, etc, etc, etc…

The Oilers keep winning on the back of Connor McDavid being a hockey god, Bruins continued to be thieves of the Penguins colors with their third jerseys but it was two suspensions that garnered a lot of discussion and took up plenty of virtual column inches.

A few days later, former Penguins’ defenseman Robert Bortuzzo was suspended for four games for cross-checking Predators’ forward Viktor Arvidsson who will be out 4-6 weeks thanks in part to the cross-checks.

I want you to go back and read those previous two sentences a couple of times for me.

Let’s not get it twisted, spitting on another player is disgusting, disrespectful, and for lack of a better word, gross. Especially in hockey because I know good and well, a lot of hockey players chew tobacco. Maybe not in games (though I’ve seen some) but before games, at intermission and afterward, so chances are Hathaway didn’t have minty-fresh breath.

So, according to the NHL’s wheel of justice, spitting on another player is good for three games and injuring a player with cross-checks is four.

(Not to mention, Bortuzzo has a history of this – take it away, Gretz.)

Here’s the question I have for the NHL Department of Player Safety and the NHL Board of Governors – where’s the line?

Better yet, let’s make this a darts comparison: what’s a bullseye? The target constantly moves.

Now, this isn’t to count the appeals process, arbitrators, all of that, it’s part of a legally agreed upon right for the workers and the league so let’s set that aside for the time being.

I’ve argued this for years, where the NHL fails is they do not have a consistent set of disciplinary lines.

I know we love to yell on Twitter and be snarky about the NFL’s catch rules, reviews, etc…but they don’t tolerate stuff like this.

Right here in Pittsburgh, we saw it.

Sure, Mason Rudolph isn’t a star, but he’s an NFL quarterback and brings in revenue for the league. When Myles Garrett decided to swing a six-pound football helmet at Rudolph’s exposed head, the NFL threw the book at him.

You want to intentionally, even if emotion got the best of you, injure another player? See ya.

I understand the NHL doesn’t hand out suspensions and discipline based on injury and I understand the criminal justice system is entirely different from a professional sports league’s decisions to punish but think of it this way – if I hit you with my car and you survive chances are I’m facing misdemeanor hit-and-run charges.

If I hit you and you die, I’m going to jail for manslaughter.

So, if Robert Bortuzzo cross-checks Arvidsson and he stays on his feet, no harm no foul, sure.

However, that’s not what happened.

Bortuzzo continually assaulted Arvidsson and used his stick as a weapon on multiple occasions.

At some point outcome has to influence punishment.

At some point, the NHL needs to change the way it looks at suspensions, fines, and discipline.

There lies the other problem

I’m 29-years-old and hockey in some capacity has been a part of my life since I was six-years-old.

The sport I love has refused to evolve. We’ve taken steps in how we develop, how the game is played, how teams are built and so much more but in the best league, on the biggest stage, and at the highest level, the people in charge simply do not care, in fact, I’d argue in private they love what Bortuzzo did.

The people that run the National Hockey League are from an era where vigilante justice was not only expected but celebrated.

Where violence was not just accepted but condoned.

Just look at the Hathaway suspension – you know what gets overlooked because of the suspension and the sheer ridiculousness of the situation?

We just ignore that because, hey, it’s hockey and if you can’t take a sucker punch you probably shouldn’t be playing!

How ass-backward is that?

The talent has evolved and until the executives do, we’ll forever be in this struggle.

The sport will also continue to be the fourth or fifth most popular in North America until then.