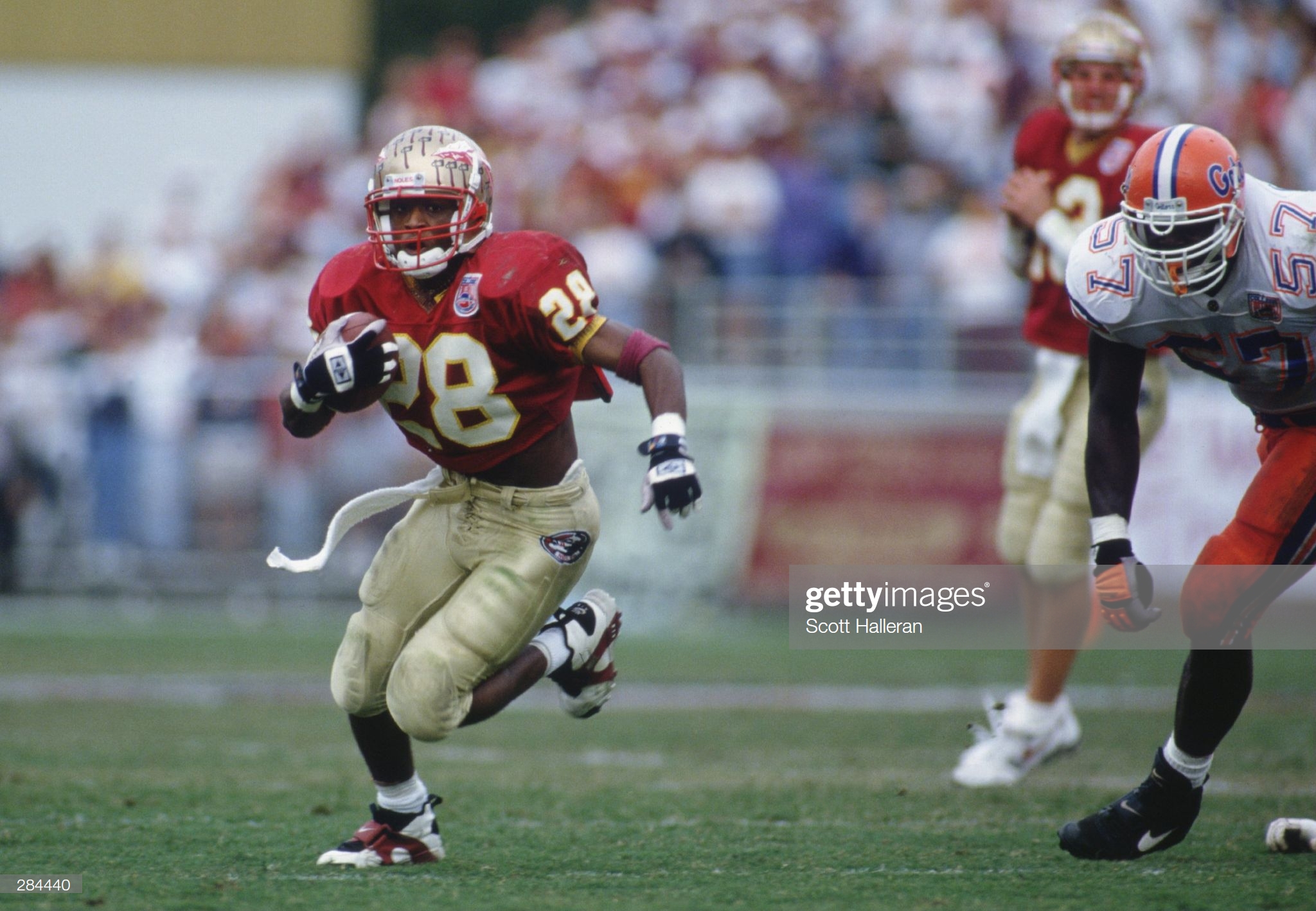 Back when they existed in college football, ties in rivalry games were rarely a cause for celebration. On this day a quarter of a century ago however, there was a grand exception.

No. 7 Florida State had not lost a home game in more than three years as it got set to host fourth-ranked Florida on Nov. 26, 1994 at Doak Campbell Stadium. The Seminoles had won the previous two in the series, but for most of the day, that streak as well as FSU’s home winning streak appeared destined to come to an end. In the end, the Gators were unable to hold a 31-3 fourth-quarter lead in a memorable 31-31 tie.

FSU actually scored first on a 35-yard field goal by Dan Mowrey in the first quarter, but over the next 40 minutes, the Seminoles’ offense could not figure out the Florida defense and the Florida State defense had no answer for Florida quarterback Danny Wuerffel. Wuerffel accounted for all four Gator touchdowns on the afternoon.

Florida State’s only lead would last less than two minutes as Wuerffel connected with Aubrey Hill for a 58-yard touchdown. Up 7-3, Florida would add 17 points in the second quarter as Wuerffel fired touchdown strikes of three and 28 yards to Jack Jackson. The second touchdown pass to Jackson came with just eight seconds left in the half following a Michael Gilmore interception of FSU quarterback Danny Kanell.

Wuerffel’s final score of the day was a 1-yard quarter sneak with less than five minutes to play in the third quarter to extend the lead to 28. The final 15 minutes however, would be dominated by the other quarterback named Danny.

It took FSU less than five minutes into the final quarter to cut the Florida lead in half. Fullback Zack Crockett scored the first FSU touchdown of the day on a 5-yard run with 13 minutes to play in the game before Kanell found Andre Cooper on a 6-yard touchdown pass near the sideline. Entering the regular season finale, Kanell had never rushed for a touchdown in his FSU career, but that would change with 5:25 to go when he scored on a 2-yard keeper to make it a 31-24 game.

Wuerffel threw a pick early in the contest to FSU’s Corey Fuller that seemed like it would prove inconsequential, but with less than two minutes to go, James Colzie’s pick on the sideline gave the Seminoles possession at their own 40-yard-line with about four minutes to play. With the help of a 37-yard swing pass to running back Warrick Dunn, Kanell would march FSU 60 yards in seven plays with a 4-yard touchdown run by Rock Preston capping the drive.

FSU would elect to kick the extra point and tie the game with 1:45 left rather than go for two and the lead. The Seminoles would get the ball back after a 3-and-out, but after a first down throw by Kanell and a scramble that was stopped shy of another first down, the clock ran out.

Kanell finished the day with 421 yards passing with wide receiver Kez McCorvey being the top receiver with 127 yards on nine catches for the Seminoles. Dunn finished with 144 yards from scrimmage. On the other side, Wuerffel passed for 304 yards.

For Bobby Bowden and Florida State, the tie seemed like more of a win, but after Florida defeated Alabama in the SEC Championship, the schools met in the Sugar Bowl just more than a month later. The Seminoles would hold off Florida in the rematch for their 10th straight bowl win, 23-17.

Of the two meetings during the 1994 season, the regular season match-up that came to be known as the “Choke at Doak” was the more memorable of the two. Florida head coach Steve Spurrier never won in Tallahassee during his tenure, but the tie was the only time that he didn’t leave a loser. It happened on this day 25 years ago.