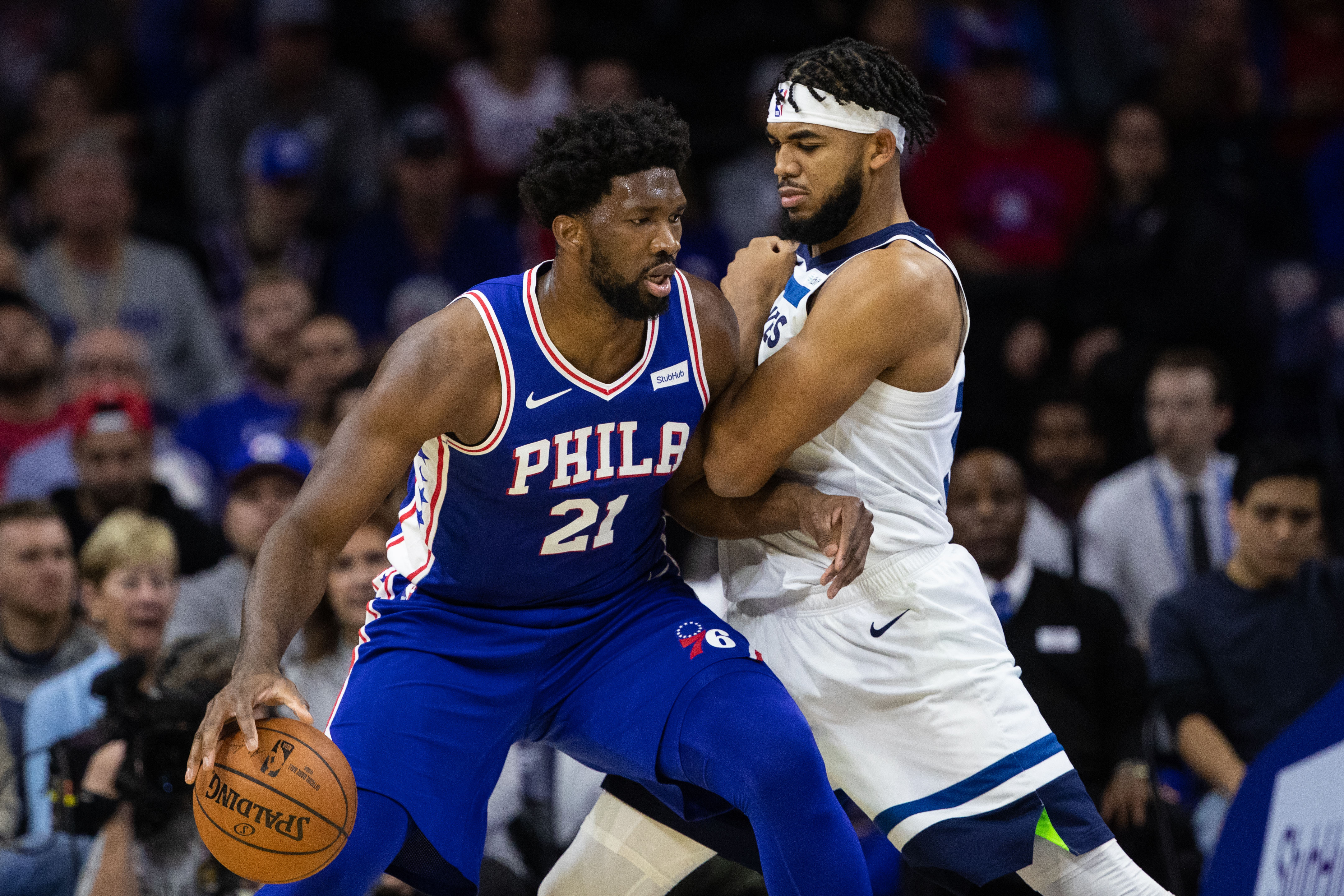 The current crop of NBA big men is the best it has been in years. The likes of Anthony Davis, Joel Embiid, Karl-Anthony Towns, and Nikola Jokic have ushered in a new era of dynamic, playmaking big men in the NBA. These four bigs aren’t the only bigs dominating the NBA either. In a more traditional fashion Andre Drummond and Rudy Gobert are stuffing shots at the rim and cleaning the glass night-in and night-out. Additionally, Kristaps Porzingis could climb the ranks as he continues to get up to speed after an injury that kept him out for an extended period of time. Now, these are just some of the bigs that are controlling games for their respective teams, but today, I want to focus on Anthony Davis, Joel Embiid, Karl-Anthony Towns, and Nikola Jokic, who are, in my opinion, the four best bigs in the league. It’s time to break down their games and rank ‘em.

Coming off his worst game of his career against the Raptors, this may seem like a in-the-moment type of ranking, but it’s not. Joel Embiid is having a down year, compared to last year. Now, his down year still consists of averaging a double-double, while leading the Sixers to an 11-6 record in the early going, but a couple things have stood out in Embiid’s game this season.

The number of mid-range shots Embiid is taking this year is higher than in the past. Last season, Embiid attempted 25.4% of his shots from mid-range, while connecting on 35.1% of those attempts. This season, Embiid is taking 30.2% of his shots from mid-range, while shooting 37.1% on those shots. Yes, the percentage is up compared to last year, but it’s not a good shot for Embiid. This season, his mid-range attempts are turning into just 0.6 points per possession for Philadelphia, proving the ineffectiveness of the shot. Shots like the one below are becoming too common for Embiid, especially when he has a mismatch. Enes Kanter can’t guard Embiid, but Embiid settles for a low percentage turn-around shot bailing Kanter out.

Despite the ineffective mid-range jumpers, often times coming early in the shot clock, Embiid is still a plus defender, but his fit in Philadelphia with their current make-up is cloudy. The Sixers were my pick to come out of the East at the beginning of the season, and they still are. However, Ben Simmons and Joel Embiid may not be a great fit down the road. Both players need the ball in their hands, and Simmons operates best when he’s surrounded by shooters. Embiid operates best in the post. Do you see the problem? Philly has been able to get around this problem in the past by surrounding the two stars with floor spacers like J.J. Redick, but Redick is now in New Orleans, and Philly replaced him in the starting lineup with Al Horford, another big. If Simmons and Embiid are going to work in the long run, they need to be surrounded by floor spacers and run through Embiid, because he’s one of the best bigs in the NBA.

Nikola Jokic is one of the most dynamic playmakers in the entire NBA, as a center. While his numbers may be down, he’s still rolling. I was tempted to put Jokic higher, but his start he’s had this season made me think twice. So far this season, Jokic is averaging 3.4 less PPG, 1.1 less RPG, and 1.2 less APG, while shooting 5% worse from the field and 6% worse from three. His numbers are down, but it hasn’t been affecting the Nuggets, who sit at 12-3, good for second in the Western Conference.

The biggest skill that sets Jokic apart from other NBA centers is his dynamic playmaking and passing abilities. I’ll let his career passing highlight reel do the talking. Just sit back and enjoy.

Yeah, NBA centers aren’t supposed to be making the types of passes that Nikola Jokic makes on an every night basis. So, with his dynamic style of play, why does he come in third in my NBA big men rankings? In short, his shooting and defense.

To start, Jokic is shooting just 24.2% from three on the season, good for just 0.72 points per possessions. Additionally, his shooting from mid-range is down. Jokic shot 45% on such attempts last season, good for 0.9 points per possession. This season, Jokic is shooting 39.2% from mid-range, equating to 0.78 points per possession. Again, it’s early, but for the number of jump shots Jokic takes (65.9% of his shot attempts are jump shots), his percentages need to come up. Maybe it’s his conditioning, or maybe it’s just an early season slump, but with the decreased shooting numbers, and shaky defense, I couldn’t put Jokic any higher than third on my list.

For somebody that watches Karl-Anthony Towns on a nightly basis, let me tell you, not enough people are talking about this man. Towns is a transcendental type of talent that fans should be talking about. After an already solid start to his career, despite Tom Thibodeau limiting him for 2+ seasons, new Timberwolves coach Ryan Saunders is empowering Towns and it has paid off for Towns and the Timberwolves. The Wolves have started operating their offense through Towns, using him in similar ways the Nuggets use Jokic at the top of the key, as a playmaker. Towns has cashed in these opportunities, averaging a career high in assists per game. When teams send double-teams to Towns in the post, he’s been calm in waiting for a cutter, or a chance to sling it cross-court to an open shooter.

These two passes below exemplify the type of passes Towns has been making all year. Both come with KAT in the post, while he slings it to a shooter in the first clip, and finds a cutter in the second clip. While Towns’ 3.9 APG is impressive, that number could be even higher if his teammates would knock down more open shots off his passes. If you take Towns out of the equation, the Wolves are shooting just 28.5% from three as a team. Karl-Anthony Towns has accounted for 28.2% of Minnesota’s total makes from deep, and he missed two games early in the season due to suspension.

Coupled with Towns’ passing, we need to talk more about his shooting ability. This season, Karl-Anthony Towns ranks second, only behind James Harden in averaging 4 three-pointers made per game. You heard that right, a seven-footer is second in the NBA in three-pointers made per game. Furthermore, he’s attempting 9 threes a game, connecting at a 44.4% clip. There are only two players in NBA history that have attempted at least 8 threes per game and connected on at least 40% of them: Stephen Curry and Klay Thompson, that’s it. That is the company that Karl-Anthony Towns is on track to join. He’s impossible to guard, and he can get a shot off from just about anywhere beyond the arc. Take these shots from this year as an example. When the Wolves surround Towns (and Wiggins?) with more shooters to space the floor and knock down shots, they are going to be a very good team, and Towns will become even more dangerous.

There is no arguing this one. Anthony Davis is still the most talented big man in the NBA, and he does it on both sides of the floor. Despite sharing the floor with LeBron James, Davis’ numbers have not fallen off. His rebounding totals are down, but he’s been sharing the court with another center, either JaVale McGee or Dwight Howard, when he’s on the court, so that’s expected. A pleasant surprise for the Lakers this season has been Davis’ passing ability. He started to show more of a willingness to find teammates last season in New Orleans, and that has carried over into this season. I think he still has room to improve as a passer, especially in terms of decisiveness out of the post, but this dish to McGee is a great example of what Davis has been doing this year.

The next area of Davis’ game I want to touch on is his shooting and where he’s getting his buckets from. Similarly to Joel Embiid and Nikola Jokic, Anthony Davis is taking too many mid-range shots, while his efficiency from that range has not been great. This season, 30.4% of Davis’ shot attempts are coming from mid-range, and he’s connecting on just 30.3% of those shots. While he has shot higher percentages from mid-range in the past (37.9% last year), that shot hasn’t been falling for Davis this season, and it’s resulting in just 0.61 points per possession. Meanwhile, Davis’ three-point attempts are generating 1.02 points per possession, a much more efficient number. If Davis can turn some of those mid-range shots into threes, it will not only help his efficiency, it will help space the floor and give LeBron James more driving lanes to the rim.

Finally, I mentioned it before, but one of the biggest reasons Davis sits atop this list is his defense. Davis’ ability to protect the rim makes him a candidate for Defensive Player of the Year each season. When Davis has been on the floor for the Lakers this season, the opponent has a 104.7 offensive rating, and the Lakers have a 14.5% block percentage, compared to 12.1% when Davis is on the bench. Although Davis has been injury prone throughout his career, his unique ability to take over games on offense and defense makes him the best big man in the NBA.

What is your opinion? How would you rank these four big men? Let me know in the comments below!