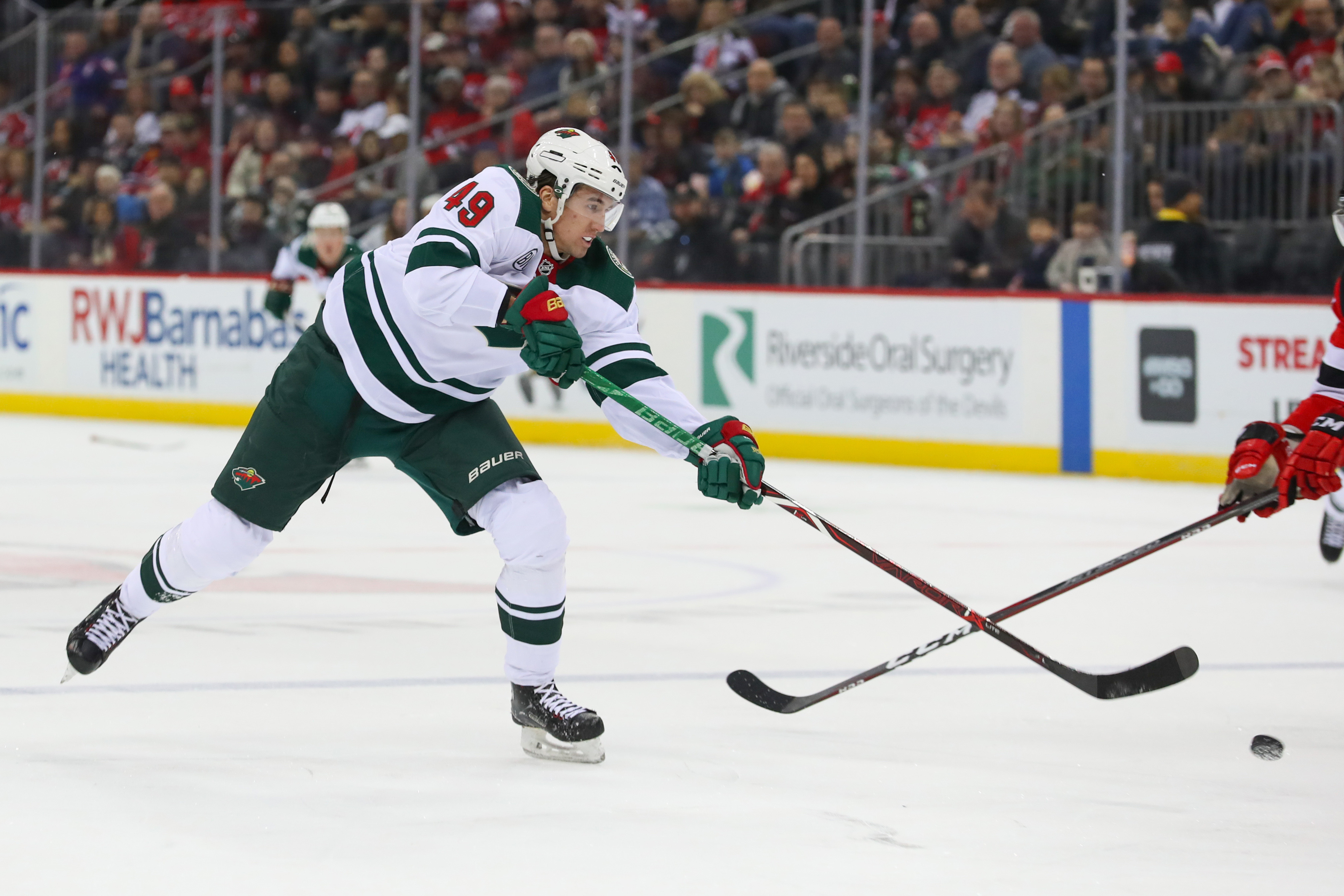 As winter decides to arrive just in time for holiday travel, the Minnesota Wild wrap up their 3rd game in 4 nights with a match up against the New Jersey Devils.  For the last two games, the Wild squandered a lead with less than 5 minutes left in regulation as they lost 3-2 in overtime last night.  New Jersey has been resting, just waiting for Minnesota to arrive.

The Devils’ season hasn’t gone quite as expected for a team that landed the 1st Overall pick in Jack Hughes and P.K. Subban in a trade this summer.  Toss in 2018 Hart Trophy winner in Taylor Hall and many felt New Jersey would be able to climb the Eastern Conference ladder and make some noise as they did so.  It hasn’t worked out that way and the Devils find themselves at the bottom of the Conference standings.  So which division cellar dweller will prevail tonight?

1st Period Thoughts:  The game started with a cautious pace as both clubs were wary of giving up an odd-man chance early.  Shots started out from the perimeter as both clubs were hoping to set up something from close range off the rebound.  Kaapo Kahkonen‘s first save was on a backhander from Blake Coleman who tracked down a puck and the Finnish goalie held onto for a whistle.  Just about a minute later it was Jordan Greenway finding Luke Kunin on a long outlet pass where he’d rip a wrist shot on goal that Louis Domingue caught with the glove.  Minnesota would draw the first penalty of the game as Ryan Donato tried to set up Mats Zuccarello out front but he was knocked down by Coleman before the puck reached him.  The Wild would strike right off the initial draw on the power play as Kevin Fiala fed the puck back to Ryan Suter who fired a wrist shot from the point hat beat Domingue cleanly who didn’t appear to see the shot due to a screen by Zach Parise.  1-0 Wild.  The Wild had great pressure after the power play goal, keeping the Devils bottled up in their own end.  The Devils would break out and Damon Severson nearly cashed in as he tried to center a pass towards Coleman that was directed just wide by some frantic defense by Suter.  Coleman would let go of a shot that Kahkonen stopped but he wasn’t sure where the puck was as it sat in the blue paint a moment before it was swept aside by an alert Ryan Suter.  Minnesota kept forcing the Devils to defend by moving their feet and contesting the puck carrier in the New Jersey zone.  Case in point, a takeaway by Donato turned into a shooting opportunity as he rifled a shot from the high slot that was gloved by Domingue.  The Devils nearly tied the game up as a deflected shot went up over the shoulder of Kahkonen and rang off the post and stayed out.  The Devils would tie the game up a few shifts later as Jesper Boqvist would fire a shot off a partially screened Kahkonen and snuck through 5-hole.  1-1 game.  The play was given a long review, as they were looking at a potential high stick in the neutral zone by Wayne Simmonds shortly before Boqvist entered the offensive zone.  The officials felt the play didn’t have any kind of a stoppage in the offensive zone and thus the goal stood and Minnesota now was tagged with a delay of game penalty.  The review clearly demonstrated Simmonds knocking the puck of mid-air at head height (mind you Simmonds is 6’2″) which should’ve been a high stick.

I've spent an inordinate amount of time researching this #mnwild high-stick challenge in the 1st period bc I recall a clarification email from the NHL. I found it. Came Oct. 1. Bruce Boudreau's challenge should have been SUCCESSFUL and New Jersey's goal should have been ERASED

The Devils’ power play was kind of static as they set up a few shots from the perimeter that either missed wide or were fought off by Kahkonen who gave up a big rebound in the process of making the save.  Minnesota would get the big kill but it was clear the Wild’s momentum had flatlined.  Minnesota was hustling well and doing their best to apply pressure to the Devils’ puck carriers but at times the Wild were being a bit too picky on their chances to shoot the puck.  Case in point, the ‘GEEK line’ were attacking off the rush and Joel Eriksson Ek found Greenway with a pass and instead of taking the shot he tried to thread a pass through a few defenders and the Wild never even were able to generate a shot on goal.  The Devils would counter attack with its top line as a big shot by Will Butcher was knocked down near the Wild crease and Kahkonen fell down to his side to cover up the puck before Taylor Hall could jam home the biscuit and the period would end with both clubs tied at 1-1.  Not too bad of a period for the Wild and a reasonable start for Kahkonen.

Neutral-zone turnover forced by pressure from Eriksson Ek, and Greenway scoops up the puck and flies into the offensive zone before going glove-side on Domingue.

What a goal by Greenway who pounces on the take away by Eriksson Ek and races into the offensive zone and goes backhand to forehand before going to cheese on Domingue.  2-1 Wild.  Minnesota would draw a penalty a Nico Hischier was called for holding.

Koivu gets the puck back from #NJDevils after they were ready to leave the defensive zone, but play is stopped due to Fiala hooking penalty.

Shortly after Kahkonen made a great save on Nikita Gusev, the Devils would tie the game as as Kyle Palmieri scores to tie the game at 2-2.

Again, #NJDevils have a response.

This time, on the PP, Hall feeds Palmieri, who's crashing the net, for the redirect by Kahkonen.

GOAL. Devils score on the power play to tie it. Palmieri with the tally.

#MNWild back to the PP. Miles Wood gets called for a penalty in the offensive zone.

#NJDevils break out for a lopsided rush but Hall shoots wide.

Jordan Greenway gets in Wayne Simmonds' face after the whistle. Probably not advisable. pic.twitter.com/ZeitG4u45r

Wild had to feel a little annoyed being tied 2-2 which is similar to their last few games which ended in disaster.

If I'm interpreting an email from an NHL source correctly, the NHL is working on an explanation now and informed Bruce Boudreau of its mistake during the first intermission

3rd Period Thoughts:  The New Jersey Devils was attacking aggressively to start the period.  As the Devils were trying to send shots on goal and players to the Wild crease in search of a rebound from their young goalie.  Minnesota would try to counter with some pressure of its own and they’d take the lead as Ryan Hartman won a draw to Donato who fed it over to Suter who sniped a shot short side on Domingue.  3-2 Wild to stunned silence from the Devils crowd.  The Devils would go back on the attack and Sami Vatanen would skate in down below the left faceoff dot where he got a shot off that Kahkonen knocked down and froze for a whistle.  The Wild seemed to be sitting back and the game started to resemble an extended Devils’ power play as Hughes moved into the high slot where he’d fire a shot that Kahkonen deflected up into the netting behind the goal.  Andy Greene would high stick Zuccarello giving Minnesota a power play.  Minnesota had a few close in chances early in the man advantage as Domingue stopped Zuccarello.  The Wild would come up empty on the power play and they’d return to defending their one-goal lead by trying to contest New Jersey the full length of the ice.  Minnesota was hoping to force a turnover that it could attack off of, and Fiala nearly had that as he turned on the jets to get by Butcher and then just failed to bury a wrap around chance.  The Devils continued to attack and Hall set up Palmieri for a chance that he rang off the right post and out.  Minnesota was just clearing the zone and changing its lines while the Devils were regrouping for another rush.  The Wild would catch the Devils pinching and Hartman worked a 2-on-1 with Soucy and as Hartman fed Soucy for the chance his backhander would skitter wide of the goal.  Both teams were desperately sending whatever shots were available on goal and hoping for a lucky bounce or deflection as Simmonds chopped at a puck that bounced on goal that Kahkonen absorbed for a whistle.  Minnesota continued to harass the New Jersey puck carriers and forcing them to waste valuable time chasing the puck around rather than going on the attack.  The Devils would pull Dominigue for an extra attacker and the Wild would block a shot and seemed to have a chance to bury New Jersey but his shot would ring off the left post and stayed out.  The Devils would call a timeout with just under 30 seconds left in the period and Minnesota put its penalty killers out even though it was simply a 6-on-5 with New Jersey’s goalie pulled.  The Wild would defend well enough not to allow New Jersey to get set up in the offensive zone and they’d eek out a 3-2 victory.

The admission by the NHL that the Devils first goal should not have stood based on a mis-interpreted rule is ridiculous.  So the league recognized the goal should not have been allowed but we’re sorry so just keep it on the scoreboard?!  C’mon.  How about phoning in right away and making a correction instead of some gutless and empty apology.

The win was an important one for the Wild who come away with 4 points out of a possible 6 in this 3-game road trip.  Still, it should’ve been 6 out of 6 points when you consider the blown leads and rancid play in overtime that never really gave the Wild a chance.  Another bright note was the debut win for Kaapo Kahkonen after he made 32 saves in the victory.