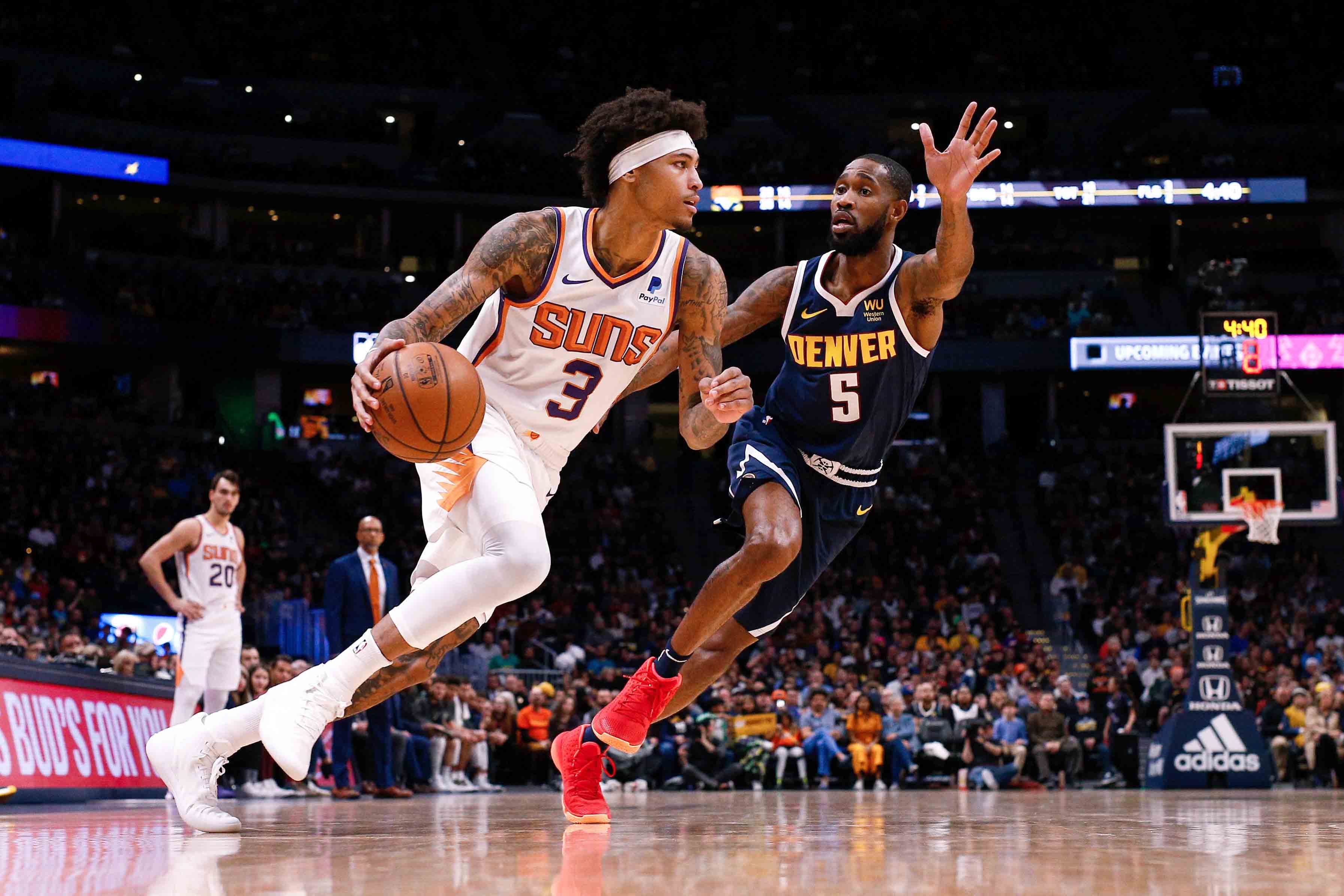 PHOENIX — The Washington Wizards are in a very different state as an organization than they were just one year ago. Back then, they were a very talented team, on-paper, looking to make a deep run in the playoffs. Now, “teach is on” as Bradley Beal puts it when discussing the development of the 2019-20 squad.

One player who was once thought of to be a part of the young core, but now is no longer is Kelly Oubre Jr.

The Wizards traded up in the 2015 NBA draft from No. 19 overall to No. 15 to select Oubre, who the organization saw as a young and athletic player that would fit well in today’s NBA. Oubre did not get many opportunities in his rookie year under Randy Wittman, but his production slowly increased year to year under Scott Brooks. Even still, the Kansas product wanted more responsibility because he always craved to do whatever it took to win.

“Putting in work ever since I got to D.C. and just trying to do everything possible to help the team win was my goal,” Oubre explained. “I felt like a lot of times I could have done more, could have been in a position to do more. I always wait my turn, I never force anything, I never try to verbally complain about what I need or what I want.”

Entering the final season of his rookie contract in 2018-19, it was unclear if the Wizards would make the financial commitment needed to retain Oubre’s talent that upcoming summer when he would be a restricted free agent. In 29 games to start the season, Oubre was averaging 12.9 points and 4.4 rebounds in 26 minutes mostly off the bench per game. On one dramatic night in December, after a loss on the road to the Brooklyn Nets, Oubre’s future was turned on its head.

At the time, Washington was struggling to say the least. Details from a heated practice had mysteriously leaked to the public, which did not sit well in the locker room. Moreover, two months into the season and the Wizards were already sitting seven games under .500. Then team president Ernie Grunfeld knew his job was on the line if the Wizards did not make the playoffs, this despite having one of the most talented teams. As he did throughout his 16 years with the organization, Grunfeld doubled down with a perceived win-now move. Austin Rivers and Oubre were departing and old friend Trevor Ariza was going to return.

“I was in the shower. I was the last person to shower, don’t think I played particularly well that game to where I was happy,” Oubre recounted about that night. “So I went into the shower, Brad and Keef were in the shower, but they were kind of giving me this look. They were giving me this look like when your dog dies and your dad don’t want to tell you. I already felt the energy, like my heart kind of dropped because I knew what day it was and what the timeline was so they just told me ‘bro, you’ve just been traded to Memphis.’ I just had to sit in the shower and think about what they were saying. It was like a long, slow process – the end of the game to getting on the bus to the next morning. I was just in my head thinking about ‘why, what did I do?’ I’m glad my brothers told me because it helped me fall a little easier.”

The young forward plays his game with a lot of energy and emotion. The reality that his team no longer wanted him had floored him. Then there was the wackiness of the trade possibly falling through when the Memphis Grizzlies did not know which Brooks (MarShon or Dillon) they were shipping out.

“‘Ok, so what now because, ‘I know, Ernie, that you’re trying to trade me,'” Oubre recalled the thoughts going through his head. “I was asking my agent like, ‘should I even go to practice, should I go to work?’ It was like another two, three days until the trade was finalized and I was kind of just in the crib, chilling. My agent told me that James Jones called and he had an opportunity for me to come play here so it was a blessing.”

Oubre’s teammates praised the 23-year old for his professionalism during a difficult time. While all of this was unfolding on Twitter, the Wizards were on the bus getting ready to depart Brooklyn and head back to D.C. It is never easy to get traded and certainly not any easier for it to play out over social media. Despite never experiencing the business side of the game before, Oubre displayed his maturity during the split.

“I didn’t want to put any of that energy into the world,” Oubre explained on where he drew strength. “Life goes on, the game goes on, they still have to go and compete the next day whether I was on the team or whoever is on the team. We still have to go out there and play. It was just, ‘move on, we’ll see each other down the line. Pray that maybe one day we’ll be together again. It was just kind of keep it moving.’ I don’t even think about that anymore because it was in the past. I shed some tears, said bye to my people, and then it’s just new roads to Phoenix.”

It took a few days for the trade to become official, and when it finally did, Oubre quickly got acclimated to the Suns. Over his last 30 games with Phoenix, he scored in double-digits in every game except for one. In 40 games with the Suns, Oubre averaged 14.9 points and 4.9 rebounds in 29.5 minutes per game. Before a thumb injury cost him the last 11 games of the 2018-19 season, Oubre dropped a career-high 32 points in his season finale against the Pelicans.

“It meant everything,” Oubre said about receiving a consistent opportunity. “It just felt like a revitalization of my career, of my love for the game. … Now I feel like I am in a rhythm to where I can do this for the rest of my career.”

Despite enjoying his few months in Arizona with the Suns, Oubre was still set to enter restricted free agency where he sat for some time. Phoenix was going through their own changes with a new head coach in Monty Williams, so it was not clear cut that Oubre would return to Talking Stick Resort Arena for home games in 2019-20. At the end of the day, the same man that brought Oubre to Phoenix in the first place, current general manager James Jones, made the call to re-sign the lengthy wing to a two-year, $30 million contract.

“No, I didn’t actually,” Oubre said when asked if he thought a return to Phoenix was likely. “With the way the business of basketball works, which I was blessed to be introduced to it last December, I wasn’t even thinking about that. I love this place and I know for sure that I wanted to be here, but at the end of the day, it’s a business. Money talks, agents talk to owners, it kind of gets into a tricky game and a tricky situation. But everything worked out, James [Jones] made a call and I was here.”

Now Oubre is back in a place where he is thoroughly enjoying for at least two more years. He enjoys that it is still long sleeves and shorts weather in November. He enjoys nearby Camelback Mountain and other sites in the area. He enjoys waking up every morning to watch the sunrise because he’s “just kind of happy.”

“Feeling good, man,” Oubre described. “Really good actually. They’ve accepted me with open arms. The whole city, the organization. It’s a great change for me being where I was at last December in D.C. I was ready for a new change, a new responsibility. The way the universe works it just gave me the full strength with the move here.”

Noted NBA trainer Drew Hanlen put Oubre through the ‘Bradley Beal Package’ this summer as the New Orleans native continues his development in the NBA. Just 16 games into the season, Oubre is the team’s second-leading scorer behind Devin Booker at 17.6 points per game. Both Booker and new head coach Monty Williams had nothing but great things to say about the 6-foot-7 lefty.

“I’ve known Kelly since the 9th grade so I know what he’s capable of, his versatility, just his energy that he brings every night,” Booker said. “He’s just always ready to compete, always ready to play, do whatever he has to do to help the team win. You definitely need somebody like that on your team if you want to be a good team to win.”

“I didn’t know he was a freak athlete, the way that he has displayed this year,” Williams expressed in amazement. “He had a dunk last game that not many people can perform in that manner under that kind of pressure. Competitive, he’s really worked on his shot, shooting the ball a lot better this year. The frustrating part for Kelly is that we don’t run any plays for him and he’s having what might be a career year so every time he gets upset with me about not running a play, I just point to his stats and just say, ‘chill out dude, you’re doing ok.’ But I love his edge, I love his different mentality to the game, and at the same time he’s still a young player that’s developing so his upside is still there.”

At the end of the day, the Wizards organization made a win-now move that in hindsight was not the correct move. Acquiring Trevor Ariza did nothing for the team’s short or long-term success. Whether Oubre would have ever been trusted to do more with or without Otto Porter Jr. ahead of him, we might never know. Oubre is still great friends with many back in D.C. and misses many things including Mumbo sauce on wings, but he has moved on to bigger and better things in Phoenix – a place he now calls home.