Ten Things Packers Fans Have to be Thankful for This Thanksgiving 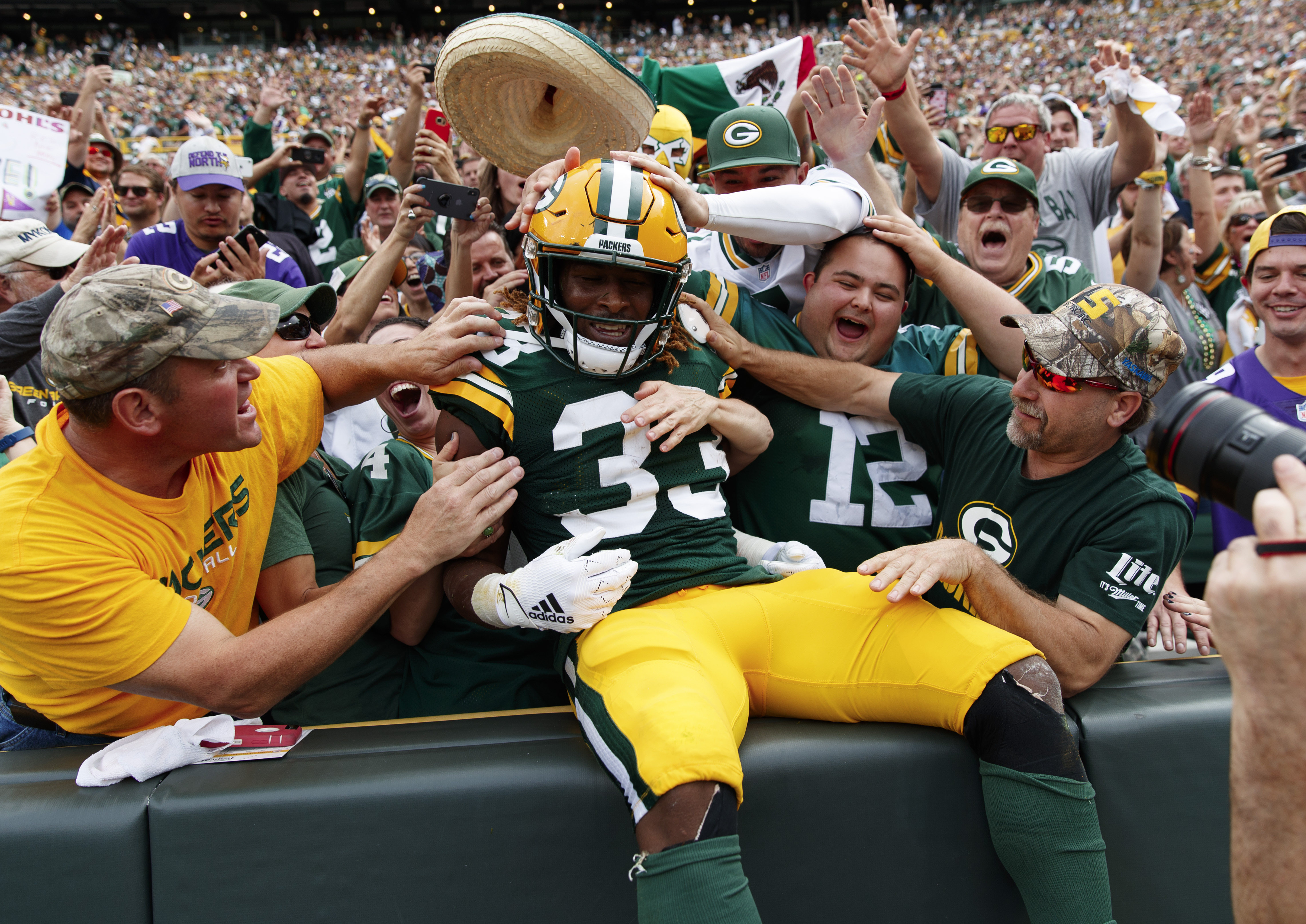 Ten Things Packers Fans Have to be Thankful for This Thanksgiving

Thanksgiving has always been my favorite holiday. It’s a great day full of food, family and football (not necessarily in that order of importance) and is also a definite reminder that the regular season has reached the stretch drive and the playoffs are just around the corner.

It’s also a time to reflect and give thanks for the blessings that are in our lives. In 2019, Packers fans have a lot to be thankful for. Here is my list for this year. I tried to mix in things from the past and the present and kept this list to 10 things. Feel free to comment on my list and add your own things that you’re thankful for as a Packers fan in the comments section.

And a special thanks to my readers. I wish you all a happy and healthy Thanksgiving.

1. Having Back-to-Back Hall of Fame Quarterbacks

Quarterback is the most important position in the modern NFL and since 1992, the Packers have had a future Hall of Famer under center. Brett Favre arrived in 1992 and gave the Packers star quality they haven’t had at the position since Bart Starr retired in 1971.

Then, Aaron Rodgers took over for Favre in 2008 and has provided another dozen years of outstanding quarterback play.

Few teams get back-to-back Hall of Fame caliber quarterbacks in their history, but Packers fans have been fortunate enough to get this with Favre and Rodgers. It’s made Green Bay a contender nearly every year since then and provided fans with two Super Bowl titles and so many memorable moments.

2. The Fans Own the Team

There is no other major league sports team in North America that is owned by the fans. So many fan-bases must deal with owners with large egos and very little knowledge about the sport. Not the Packers. The franchise is literally owned by the fans with stock sales in 1923, 1935, 1950, 1997 and 2011.

Nowhere else can the stands be filled with owners dispersed throughout the crowd. It’s a matter of pride and it sets the Packers apart from every other team in pro sports.

The Packers have won more NFL titles than any team in the league’s 100-year history with 13. They are the only franchise to ever win three titles in a row and they’ve done it twice. The first came under founder Curley Lambeau in 1929, 1930 and 1931. Then, Vince Lombardi’s dynasty teams won three in a row from 1965-67 culminated by the Ice Bowl win and victories in the first two Super Bowls.

The Packers also have the second highest number of Hall of Famers with 25. The names are among the most celebrated in league history like Don Hutson, Johnny Blood, Ray Nitschke, Forrest Gregg, Bart Starr, Willie Davis, James Lofton, Reggie White and Brett Favre.

Lambeau and Lombardi are two of the greatest coaches ever and both have their very distinct place in Packers and league history.

Packers fans have a great tradition to look back on and should be proud of all this franchise has accomplished over the years.

4. A new head coach with a new attitude

Matt LaFleur joined the Packers this year and he has gotten the team off to a strong start. LaFleur installed a new offense and a new attitude and the result is a strong 8-3 start for the team in his first season.

The new coach helped revive Aaron Rodgers who had gotten into a bit of a rut with his former coach and challenged the veteran quarterback to learn a new system.

LaFleur also re-emphasized the running game and helped bring out the best in Aaron Jones. The future looks bright for LaFleur and that can only make Packers fans happy.

There are few better venues in sports than Lambeau Field. The old bowl, which was built in 1957, has a great view of the field from every seat. Ask most football fans, even non-Packers fans, how great Lambeau is. In fact, a trip to Lambeau Field is on many football fans’ bucket lists. The history and tradition of the stadium and the many great games and great players who performed there add to the atmosphere.

So many modern stadiums lack a personality and a history. Lambeau Field has plenty of both.

The Packers have so many great fan-friendly traditions. The tailgating at Lambeau is legendary with the smell of beer and brats permeating the entire parking lot hours before a game.

The team also has “The Lambeau Leap” which was invented by safety LeRoy Butler in 1993. After scoring a touchdown at Lambeau, players jump into the stands and literally celebrate with the fans.

Another special bond takes place during training camp when players ride the bicycles of young fans to and from the practice field. It’s a thrill for the kids and another way that the team and the town bond at the start of every season.

These traditions help make being a Packers fan special.

The Packers have not traditionally been big spenders in free agency but this year, GM Brian Gutekunst made a big splash and it paid quick dividends. The Packers brought in Adrian Amos to solidify the safety position and Billy Turner to add consistency at right guard. Both players have been good additions to the team.

Gutekunst also added “The Smith Brothers”, Za’Darius and Preston who have revitalized the Green Bay pass rush and helped create a new attitude in the locker room.

The Packers free agent class of 2019 helped improve the talent level and the culture of this team and Packers fans should be very thankful.

The Packers running game was often overlooked under the old regime but has been revitalized under LaFleur. The running backs have also become a bigger part of the offense as receivers.

Jones has exploded this season, running for a career-high 11 rushing touchdowns in the first 10 games of the season.

Williams is a steady, smart complimentary piece in this offense. He helps spell Jones and keep him fresh. Williams is an excellent blocker and receiver. His yards-per-attempt is slightly higher than Jones’ and has five touchdown receptions in 25 catches this season.

The duo is exciting to watch, and both are versatile performers. Their presence means Rodgers doesn’t have to win games on his own.

The Packers have two rookies starting and making major contributions to the team’s success this season. Darnell Savage has been a strong addition at safety, starting from Day 1 and making some big hits and plays in the secondary.

Elgton Jenkins took over at left guard after Lane Taylor was injured in Week 2 and has started every game since. Few offensive linemen make a splash in their rookie seasons, but Jenkins has been consistent and strong both opening holes for the Green Bay running backs and at protecting Rodgers.

Yeah, it’s that time of year again. I’m thankful the Packers still play outdoors and on real grass. The snow and rainy weather in Green Bay in the second half of the season creates great memories for players and fans alike. The sight of the snow falling earlier this month against Carolina was a great backdrop for the television audience and a great memory for the fans in the stadium.

The Ice Bowl is the greatest bad weather game in Packers (and probably NFL) history, with the Packers overcoming the minus-13 degree cold and a tough Dallas defense to win their third straight NFL title, but there have been so many others.

The Snow Bowl in 1985 was outstanding, with nearly 20,000 fans braving a blizzard to see the Pack shut out Steve Young and the Bucs 21-0.

The Pack scored a big playoff win over San Francisco in 1996 in a mud-soaked field that saw return specialist Desmond Howard come up with several big returns to key the team to a victory.

The weather in Green Bay is unpredictable, but that only adds to the fun at Lambeau Field and makes for great memories.