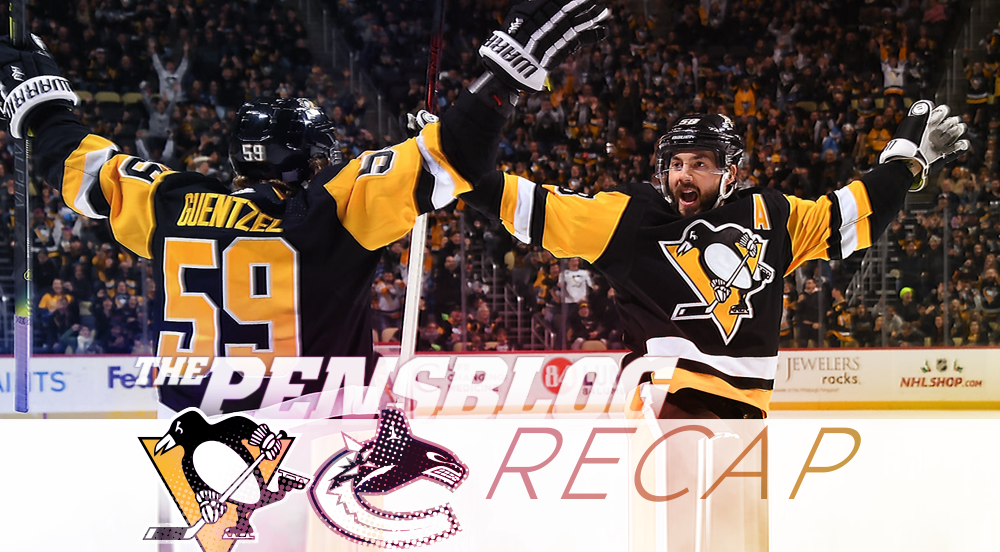 The Penguins hosted the Vancouver Canucks last night in Pittsburgh in their annual Thanksgiving Eve game. Fitting that this game fell on the calendar where he did, because it was very similar to most Thanksgiving dinners. The day starts off well when family members are pleasant on arrival. Things get a little dodgy when Aunt Barb judgingly inquires about your 5-year-plan. Slowly relatives get drunk and start dunking on each other’s political beliefs. Finally, you dig into the leftovers and eat and laugh and remember why you love the ones you are around.

To start the game we were thankful that the Penguins were able to use the same lineup two games in a row for like the first time this season. They made one minor change swapping Chad Ruhwedel in for Zach Trotman, making Jusso Riikola a healthy scratch again.

Questionable move by Sullivan starting Murray over the hot hand that is Jarry. In my Gameday I said you couldn’t go wrong with either, boy was I wrong.

The Penguins decided that their lazy starts to games are not the best strategy and they have changed that recently. This one was no different, and the Penguins grabbed a quick lead in shots as Vancouver struggled to remember how to play. Less than three minutes in the Pens run a set faceoff play, Malkin wins the puck back to Jakey Boy and Jaker the Shaker Baker ain’t no faker.

Jake Guentzel has points in all seven of his career games vs. Vancouver (7G-3A). pic.twitter.com/YVzS5a4h37

Bryan Rust deserves an assist for the subtle drive to towards the center before jumping without ever looking at Jake. As soon as the puck went back Rust knew the shot was coming, and by driving to the dot he created an LA style traffic jam in front of Demko. Three straight games with a goal for Guentzel, who continues to need Crosby to shine.

The Penguins kept dominating the ice following the goal, Vancouver looked like the Vancouver of old. Halfway through the frame, Troy Stretcher interfered with Malkin and the Pens went to work on the powerplay. The last few weeks have been rough for the powerplay, but things have started to improve lately with Kris Letang back at the point. The puck came to Malkin at the blueline and that turnover machine corraled the puck, carried it down the boards and put an absolute laser tape to tape across the zone to Bryan Rust, and in Rust we Trust.

If you ever wanted to translate the phrase Big Dick Energy into Russian it’s making this pass:

After finishing last season with 18 goals in 72 games, Bryan Rust has put up a ridiculous 9 goals in 14 games so far this year.

The Pens continued to dominate but just couldn’t get that third goal behind Demko. As the period winded down the Canucks took advantage of a defensive miscue and J.T. Miller went top shelf with a backhander.

Just a disgusting goal, taking the pass off the skate to the backhand to the top shelf. Elias Pettersson decided to celebrate the goal by taking a delay of game penalty two minutes later. The Pens wouldn’t convert on that powerplay as the period would end with 18 seconds remaining in the advantage.

So far, so good. pic.twitter.com/MEDbWM72Zm

Three shots allowed in the first = Good. One goal allowed on three shots = Not Ideal.

Elias Petterson is one of five active players to reach the 30-point mark in fewer than 30 games in each of his first two or more NHL seasons. The others:

This is one of those that you want Murray to save for sure, but it is also a really good fucking shot. With his positioning being just about perfect Murray and the world assumed Pettersson was going to go glove side. Look at this subtle change of the wrists Pettersson uses to trick Murray:

In a split second Pettersson changes the face of his blade and puts it in the only spot Murray can’t get it blocker side. What an amazing snipe.

With the game tied the Penguins weren’t quite as flashy as they were in the first as the Canucks started skating like a confident group. The Penguins continued getting the majority of the scoring chances but Demko was holding his ground. It looked like we were going to be heading into the third tied and then Matt Murray and the defense checked out early for the holidays. First, it was Kris Letang getting scorched by Jake Virtanen:

Tip 'em back. Jake Virtanen uses his speed to pick up the puck and then tucks it behind Murray. #Canucks pic.twitter.com/Ei5xBD4ETP

When your defense gets burned like this your goalie has to bail you out. Of the first three goals, this one is the one you want Murray to stop. The other two were in perfect positions, this one there aren’t any excuses for.

The same goes for Kris Letang, who took a Jack Johnson style line on this play:

That’s Letang, encroaching on the sure-footed Brian Dumoulin’s territory. This is Kris Letang, watching the puck with his back to the person he should be marking:

Not to be outdone, Chad Ruhwedel took it upon himself to replace Letang has the most useless defender of the period.

Every human in this gif, including Murray, moves more than Chad Ruhwedel does. Thanks for participating, enjoy the pressbox for the next twenty games. Sullivan would pull Murray after this goal, with like 10 seconds left, to send a message both to his goaltender and to the team. The team did not allow a goal in the final ten seconds of the period.

Looking for more of this ⬇️ pic.twitter.com/Z8BTWmRZGZ

The crowd at The Paint Can barely had time to get fired up for another comeback before Dominik Kahun was called for tripping Tyler Myers at 1:24. The Pens penalty kill went to work, and the Canucks powerplay just overpowered them, and a JT Miller shot deflected off jack Johnson’s stick and into the net

I’m not so sure Jarry makes this save if the shot isn’t deflected anyways, Miller has it dialed for the top shelf and Jarry’s sliding over with his glove at least a foot below the bar. It just felt like this puck was destined to go in. Shit happens, blame Murray.

With the newly re-established two-goal lead the Canucks went to work getting another one, while Kris Letang and Tristan Jarry were less than stellar.

It’s not worth discussing the save that should’ve been, both Penguins goaltenders left a lot to be desired in this game. Kris Letang continued his strong night by taking a delay of game penalty two minutes later giving the Canucks the keys to the arena.

During the powerplay J.T. Miller decided he had scored enough in this game and took a hooking penalty to even things up. At 4v4 the penguins got to work, Jared McCann put a puck on net and Dominik Kahun used some slick mitts to track down the rebound and give the team hope.

Dominik Kahun went to the net and wouldn't be denied! pic.twitter.com/NWEEz4erHJ

This play by Jared McCann to box out Jordie Benn should not be ignored. McCann has been an impressive addition by Rutherford, and he is quickly making his case for a permanent third-line center position. Getting the shot on goal was impressive, so Kahun had to up the ante with some great hands. Just nasty stuff here by Kahun who with his 7th goal in 24 games is on pace to shatter his rookie season’s 13 goals in 82 games last year.

After the 4v4 concluded the Penguins received an abbreviated powerplay. The puck came to Evgeni Malkin and he paused at the top of the zone, looked around, unzipped his pants and whipped out that

Get that fucking dog off my fucking lawn is what Mike Lange wanted to say. Evgeni Malkin you beautiful man. The only way this goal didn’t make you do a double fist pump is if you lost your arm in ‘Nam.

The goal put them within one, but you knew the Penguins weren’t done. That’s the beauty of this team. Mike Sullivan finally has four lines of players that he trusts. Four lines that play a suffocating style of hockey that looks a helluva lot like the cup winning teams. The tables tilted and the Canucks looked like the young, inexperienced team that they are. Desperately holding on like Jack did in the freezing Atlantic ocean waters, the Penguins pulled a Kate Winslet and refused to share the door. Three minutes after Geno’s blast, Brandon Tanev paired up with John Marino to get a puck around the net and Zachary Mustache Reese lit the city on fire.

A minute after the goal Elias Pettersson and Bryan Rust were tagged with matching minor penalties for holding and the game would slow down for two minutes while it went to 4v4. Following the conclusion of those penalties, the Penguins continued pressing. Eventually, it was the first line on the ice again. Malkin to his new buddy Guentzel. Guentzel thought about the hattrick but then remembered he’s a good, team-first kind of boy and gave it to Letang who was locked and loaded.

TOUCHDOWN (and the point after is good!), KRIS LETANG! pic.twitter.com/i8NeRJFXA4

The Canucks were shellshocked, the fans were rocked from jumping around so much, this night was insane. Vancouver would pull their goalie and as time expired Evgeni Malkin showed everybody just how much he cared about this game.

It’s a game in November and Evgeni Malkin is making a play like this with one second left. This team has had some impressive comebacks this season. This game was the best of them. They don’t falter from their system. They don’t pout when they start losing. They don’t lose faith in questionable goaltending. They just keep working. This is a dangerous hockey team that isn’t even healthy. This is a team that is missing their best player. This has nearly turned into a 2000 word recap and you’re still reading it on a holiday because this team is special and you know it. Eat some turkey. Enjoy your family. And be Thankful as hell for what looks to be another promising season in the city of Pittsburgh.

From all of us at ThePensBlog we thank you for reading and interacting with us on a daily basis, and we wish all of you a happy Thanksgiving with your family.