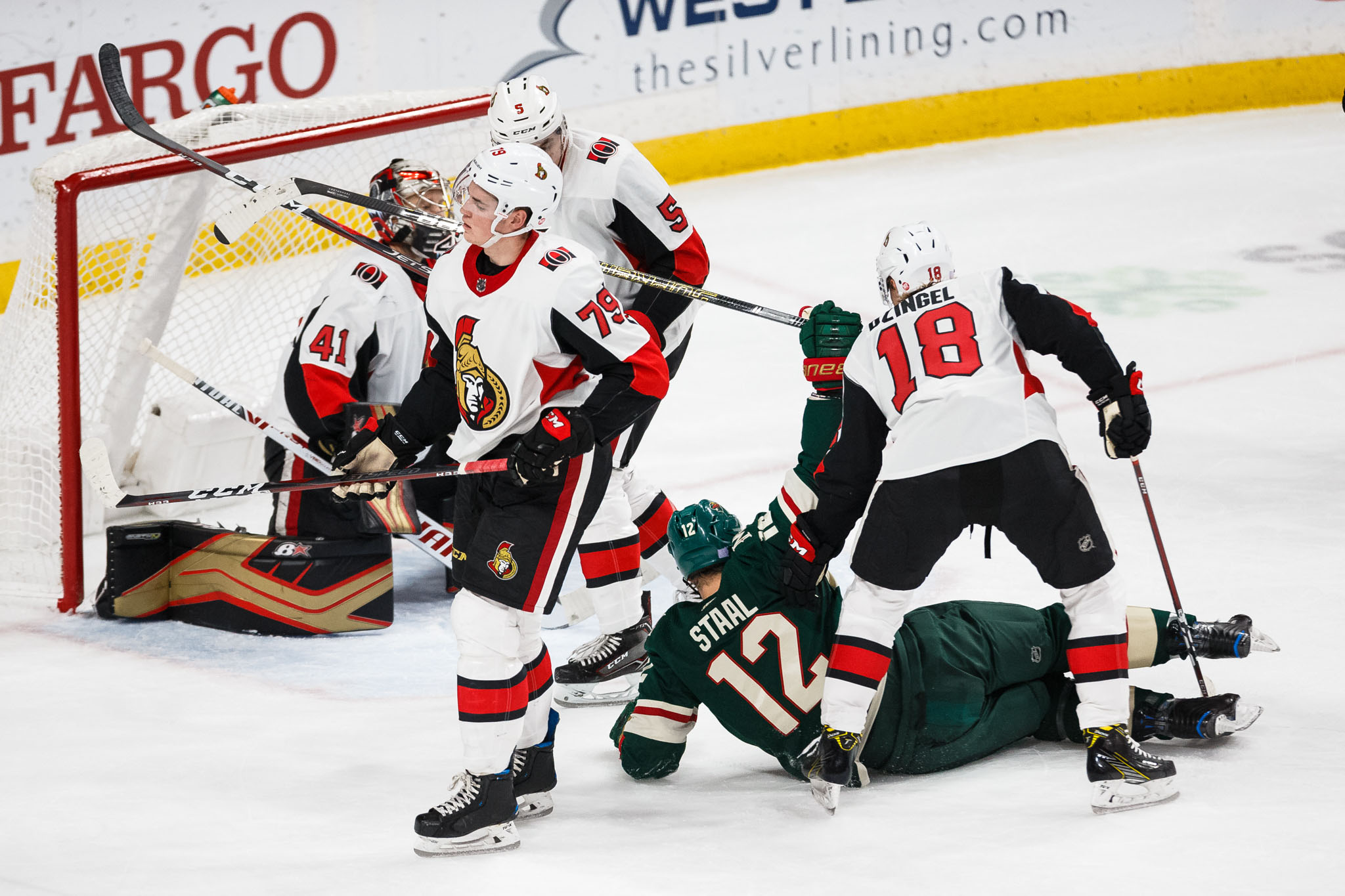 Happy Thanksgiving to all of our readers!  So what did you take a bite of first?  The mashed potatoes?  The green bean casserole?  The stuffing?  The turkey?  A dinner roll?  And just to cover my bases, was it the tofurkey?  No matter what, if it was time spent with family or friends it was likely a good time no matter what was for dinner.  Its about being together and being thankful for what you have.

For the Minnesota Wild, they’re probably most thankful about finally being back home after what has been two months where they probably felt like they were living out of a suitcase.  On the bright side, when Minnesota has been on home ice it has mostly been fairly successful (knock on wood), and they are currently on a 7-game streak where they’ve at least gained a point in the standings.  It may not be something really brag about, but its a start for a team that is slowly starting to climb.

Devan Dubnyk returned to practice but he will not be available until Sunday’s game against Dallas at the earliest.  Wild Head Coach Bruce Boudreau announced Kaapo Kahkonen will get the start against the Senators.  Alex Stalock performed reasonably well this season and Kahkonen had a solid NHL debut on Tuesday against New Jersey.  Dubnyk was attending to personal matters, apparently involving some kind of a major health scare involving his wife.  Our thoughts are with him and his family during this challenging time.

Minnesota’s offense is showing sign of developing chemistry as an older veteran like Zach Parise seems to be heating up as well as the young ‘GEEK’ line of Jordan Greenway, Joel Eriksson Ek and Luke Kunin.  Kevin Fiala has also been exhibiting a greater level of comfort and even when he isn’t lighting the lamp he’s firing the kind of shots that give goaltenders fits.

On the backend, Jonas Brodin has kind of emerged as the most consistent defensive presence for the Wild.  His tremendous mobility and anticipation have come in handy when playing against opponents that have a bunch of high end offensively gifted forwards.  Ryan Suter is starting to look more comfortable as well through regulation.  3-on-3, that’s a whole different subject but let’s save that for another day.  And lastly, Carson Soucy is going to make it pretty tough for Greg Pateryn let alone Nick Seeler to ever make his way back into the Wild lineup.

The Ottawa Senators are in the midst of a rebuild, as they’re using a collection of younger, faster players to compete.  Rookie Head Coach D.J. Smith, a former NHL enforcer seems to keep this club battling hard even though they haven’t had a lot of success in the win column.  The Senators have some great speed in players like Anthony Duclair and Colin White as well as skilled players with some sandpaper to their game in Jean-Gabriel Pageau, Nick Paul and Brady Tkachuk.  They may lack in experience but they rarely lack energy or hustle.

On the back end, they are led by high-risk, high-reward Thomas Chabot and Erik Brannstrom.  Stay at home types like Dylan DeMelo, Mark Borowiecki and veteran Ron Hainsey do their best to slow opposing forwards down because the team doesn’t get as much help from its forward group in their own end.

The Senators are coming off of a 2-1 loss to Boston where they gave the Bruins everything they could handle.  Defeating this team’s spirit will not be easy and if the Wild let them hang around they will haunt you.

What must the Wild do to earn a victory this afternoon?

1. Don’t Chase the Game – 3rd period collapses in Boston and New York not withstanding, the Wild play better when they’re not chasing the game.  Minnesota should want to get the first goal and put pressure on the Senators to try to match instead of expending lots of energy trying to rally for a comeback.  Scoring first will get the home crowd behind you and help add to your energy on the ice.

2. Avoid too much turkey – This might sound like advice for Thanksgiving, but its really about being smart and staying out of the penalty box.  The Senators may have a lousy power play, but you don’t want to give them opportunities to gain their confidence.  So move your feet and do what you can to stay out of the penalty box.

3. Finish them off – As important as it is to get an early lead and playing smart, its equally important to not let the Senators to hang around.  Games against opponents like this can become a nightmare if you let them hang around make them feel as though they can compete and come away with 2 points.  Instead, get the lead and then keep pouring it on and bury them.

What do you think will be important for the Minnesota Wild to earn win on Black Friday?  Tell us on Twitter @CreaseAndAssist or in the comment section below!