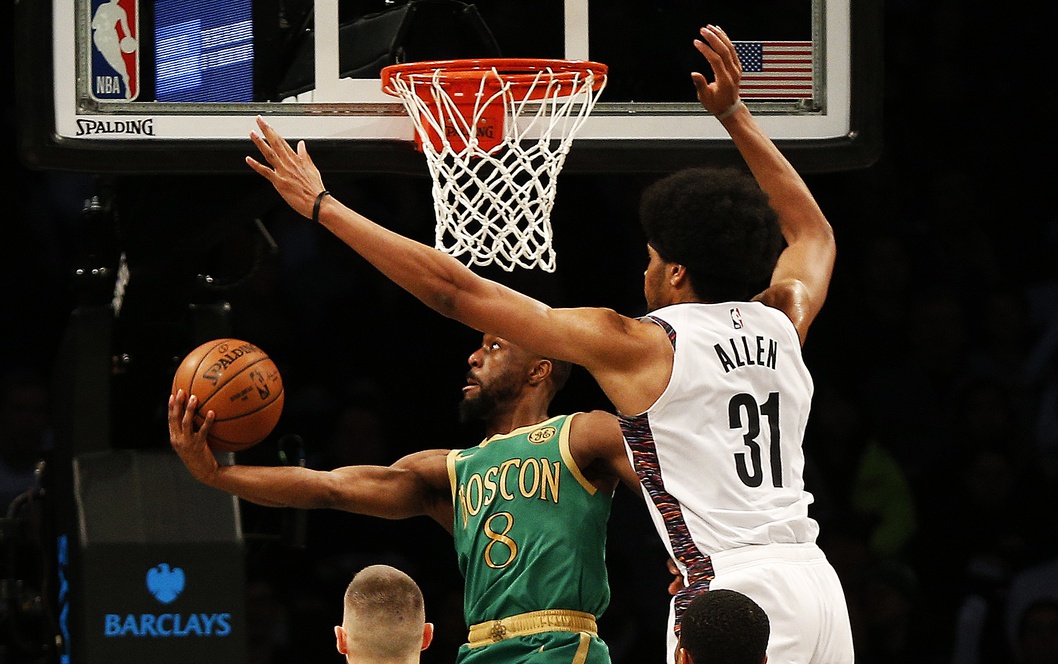 Encores are tough! And the Boston Celtics weren’t prepared to play theirs against the same Brooklyn Nets team they smacked two nights ago, albeit this time at noon on Black Friday. (This is not historically a time in which good basketball is played by anyone.)

Though Jayson Tatum had an exceptional offensive game (26 points, 9 rebounds and 4 steals), he was part of the Celtics’ team-wide lackadaisical defense. Kemba Walker having a ho-hum game (for him; 17-5-6 on wretched 32% shooting) certainly didn’t help, especially as his counterpart Spencer Dinwiddie was running absolutely wild en route to 32 points and a Brooklyn win, 107-102.

Boston looked hung over on both ends, surrendering 12 points in 2.5 minutes as the Nets fired relentlessly from beyond the arc:

This defensive effort is just not going to work. Dinwiddie just casually strolls wherever he wants. Allen barely has to set the pick. Theis has no choice but to protect against the drive. No one helps him out. Easy alley oop. pic.twitter.com/1FlsCfeWvn

12-4 Nets 2:31 in. Timeout Celtics. Brooklyn continuing to let it fly from behind the arc as they are 2-3 already.

Nets are also continuing to run middle PnR, which Boston struggled to defend on Wednesday. Keep an eye on that.

Boston’s effort intensified after the first timeout and Kemba Walker, Jaylen Brown, Brad Wanamaker and Javonte Green all had some nice moments. However, Brooklyn forced mucho turnovers and stayed well ahead on a steady diet of paint points and threes.

floating it up for 2️⃣ pic.twitter.com/CTScOvIjI6

Too much turkey for Tatum.

Jaylens the only guy playing well

Wannamaker insanely good at the strip on driving players. Smarf-ian, even.

The team was frankly lucky to just be down eight (31-24) at Q1’s end. Celtics amped up their defense for Q2, holding the Nets to 3 points over more time than it took Brooklyn to score 12 in the first frame. But some issues persisted:

Also some sloppy defense. Bad beginning to the game for Tatum https://t.co/FY5GiluOeM

(He did bury a real nice pull-up three just a minute or two after that last turnover, but still.) Meanwhile, Kanter made the most of his minutes against DeAndre Jordan:

(That said, Kanter was basically useless if Jarrett Allen was playing.)

Things became more even-keeled between the two squads later in the quarter, but it still felt like the latter wanted it more in this first half. You could even say that they wanted it more than their fans…

This is the third NBA arena I’ve been to but it’s pretty quite in here. There’s only one section that‘s leading the “Kyrie’s better”chants

Tatum decided to redeem himself, and did with a bunch of buckets in a hurry, including two consecutive deep triples. That, and increased effort overall, cut Brooklyn’s lead to 58-55 as the buzzer sounded to end the first half:

Jayson Tatum has 18 at half behind a heavy dose of pull-ups (including several 3s) pic.twitter.com/hnsXfex9eY

Honestly no one really did well during the frame’s initial stretch. Just a lot of odd stuff:

Why does Theis get yanked so soon? Watch him on this get stuck in no man's land. Doesn't impact Dinwiddie's shot at all, doesn't trap, isn't in position to rebound. pic.twitter.com/WaLqcGwnxP

Neither Atkinson nor Stevens is very happy with their defense right now. Both are letting guys have it.

Wow, Jaylen Brown almost murdered Jarrett Allen with that dunk attempt and it would have been the greatest thing we've seen this year… #Celtics #Nets

Smart firing a last-second fastball at Kanter's face was probably not the best idea https://t.co/KqUTc1OWHj

Then Brooklyn punched back. It was pretty balanced for better and worse, with the home team ahead 87-81 at Q4’s start.

Dinwiddie is playing like an All Star right now. He's drilling 3's and all the C's attention on his shooting is opening up a ton of alley oops. C's defense has been complicit in this. They're not up on him at all

Anytime you can play Kanter and Semi together you gotta do it.

As the clock wound closer to the end, the Celtics had a lot of great defensive plays to draw close to a tie…and just enough boneheaded mistakes to seal their own fate.

Celtics should learn from this game they need to play hard all game and not just in the last 8 minutes.