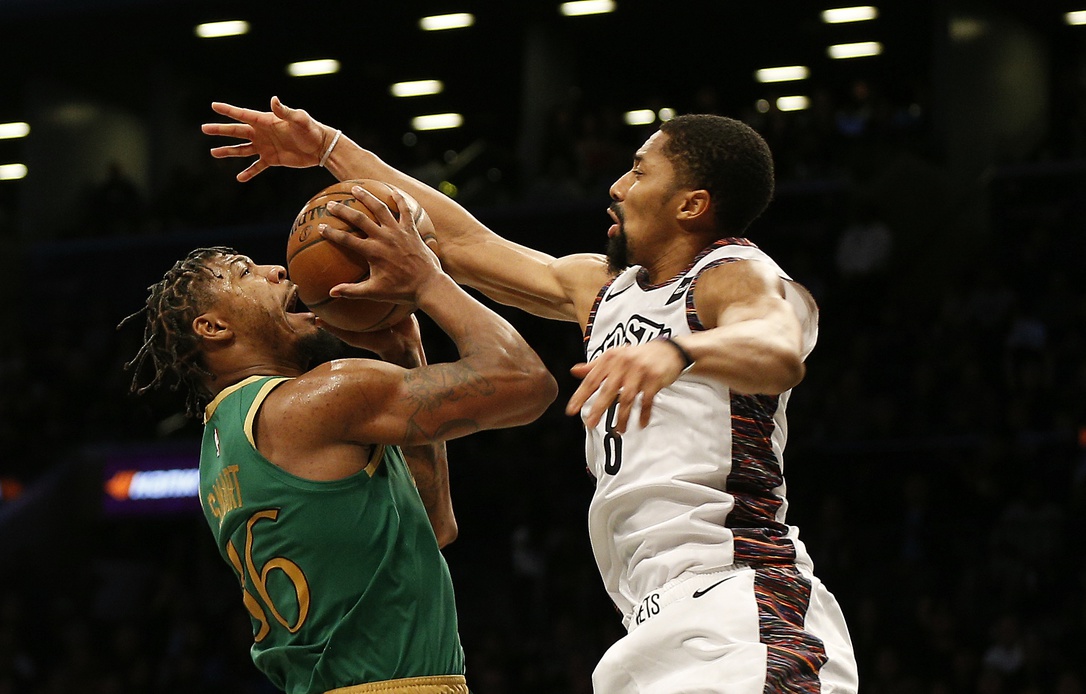 This is so much less fun to do after a loss, but such is life. Let’s get granular (and humorous):

Early turnovers and bad execution put Boston in an inescapable hole.
Looking at the box score, you can see the Celtics racked up only one turnover more than the Nets (19 as opposed to 18). Brooklyn is not particularly adept at forcing turnovers (or preventing them, as Basketball Reference shows), but they managed to do so early and often in this contest.

This contributed greatly to Boston’s inability to ever punch back and maintain a revitalized status, despite having very good runs near the end of each half. More than anything else, though, it was bad execution of plays on both ends and particularly uninspired offense early on that put them in the dirt long before the game ended. Blame it on the tryptophan.

Dinwiddie is stupid good, and the Celtics weren’t prepared for him in this one.
The man was basically unstoppable, burying 6 of his 10 field goals beyond the arc on his way to 32 points. The Cs had no answer; even Marcus Smart seemed unable to muscle Dinwiddie in this contest.

You already have people—on Nets Twitter, no less!—joking about trading Kyrie Irving to let Dinwiddie run point as a full-time starter. Fascinating!

GRANT showed promise…but had his first truly big blunder
There’s a lot of reasons why Grant Williams is beloved by Celtics Twitter, the vast majority of them legit, such as his uncommon instincts on defense.

Grant Williams has had a rough game today, yet the Celtics are still a +6 while he's been on the floor. He continues to defy logic in the plus/minus category – just as Marcus Smart did during his first few seasons.

The +6 likely stems from his three blocks. But he’s hardly immune to mistakes, and made a big one this afternoon:

The Celtics really could have used that timeout Grant Williams used to save a possession.

There is a separate contingent of Celtics fans who are seriously nonplussed by Grant Williams or outright hate him, so I guess they were pleased to see their approach validated. But the accidental-timeout mistake was colossal; no two ways about it. And his offensive struggles, while par for the rookie course, are also hard to ignore.

It’s not as if the other reserves were necessarily above reproach. Enes Kanter and Robert Williams both played about 20 minutes because Daniel Theis was strangely absent after being cleared to return to play from a minor knee injury (not sure what that was about), and each showcased their respective flaws of poor defensive IQ and recklessness. Carsen Edwards chucked 5 extremely cocky threes and only made one. Ojeleye had some nice moments and more cringeworthy ones. Brad Wanamaker was really the only bench player who unreservedly succeeded in his minutes, and that wasn’t enough.

Boston’s City jerseys suck. So do a bunch of other ones!
Boston’s are definitely pretty gauche, albeit almost entirely because of the font on the front. The colors themselves are solid, just as the St. Patrick’s Day unis from earlier this decade were.

But Brooklyn’s weren’t much better: For one, Biggie was a Knicks fan; I feel like Jay-Z is the much more obvious hip-hop salute for their squad. (M.O.P. would be even better, but that ain’t happening for many, many reasons I cannot explain here.)

And furthermore, there are some jerseys from other cities that are as bad or worse than Boston’s. LIKE, HOLY SHIT THOSE MAVS ONES ARE WRETCHED. Sacramento, Indiana, Milwaukee, the new Minnesota ones (why would you ditch the Prince unis???), Detroit, Orlando, Charlotte, OKC—all bad to varying degrees, especially the latter four. So yeah, the Boston ones are bad; we just ain’t alone in the awful. (The Grizzlies, Clippers and Warriors are my favorites of these, for anyone who cares.)

And finally, Marcus Smart made a worthwhile point in his postgame availability.
Questions about Kyrie were inevitable, but Marcus Smart was not interested:

Marcus Smart: “I’m really tired of hearing (questions) about Kyrie. Kyrie’s no longer with the Boston #Celtics. It’s a slap to everybody on this team to keep hearing Kyrie’s name. Yet everybody, including the Boston fans want to talk about Kyrie.”

Smart is absolutely right in saying this has gone far enough. Not so much fans booing Kyrie as an opposing player; our own Mike Dynon made a perfectly reasonable argument for that in today’s Dump. But the endless back-and-forth comparison of this year vs. that year, Kemba vs. Kyrie, et. al. ad infinitum is just wearisome.

I mean, even if you just want to look at things in the scope of this most recent game, some of the specific things that caused Boston to lose it were not dissimilar from mistakes made in similar matchups last year, and dysfunction is certainly not a factor with this squad. To which you may say “Well, that’s the point;” I’m merely saying I don’t think it’s productive to keep making comparisons.