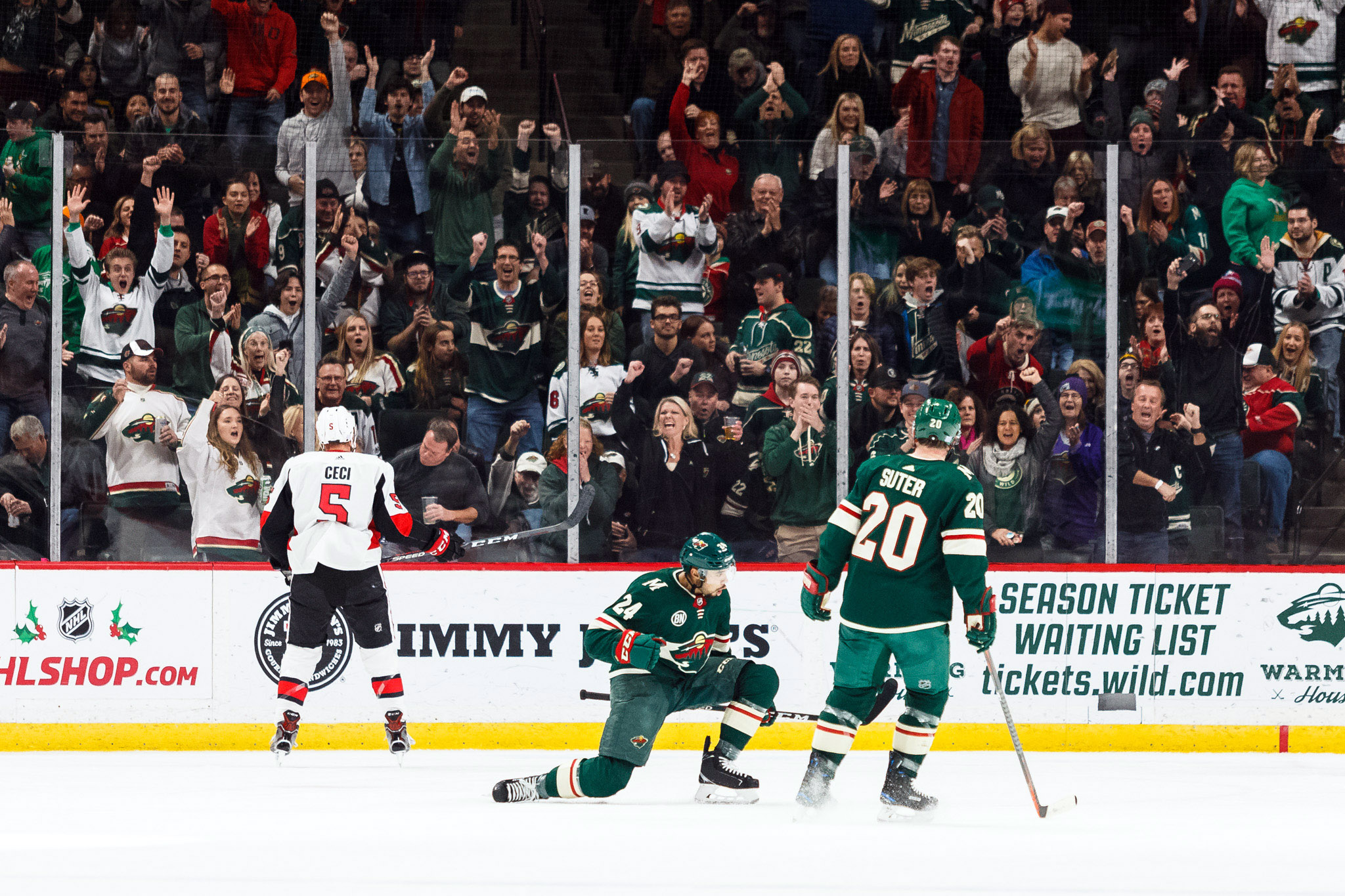 Happy Thanksgiving to all of our followers out there.  We hope you’ve had a safe and fun holiday so far.  As shoppers rush out for Black Friday deals, the smarter folks will shop small and local or just enjoy the warmth and Thanksgiving leftovers from the comfort of home.  Nothing like making that mashed potato turkey sandwich on the day after the big feast.

Speaking of home, Wild fans get a chance for a matinee home game against the Ottawa Senators after returning from a 3-game Eastern Conference road trip.  The Wild have earned points in their last 7 games.  Can they keep that streak going this afternoon against the Senators?

1st Period Thoughts:  I was at the game and instead of trying to recall everything first hand I’m going to leave these Twitter reflections and then chime in my recollections at the end of each period.

Matt Dumba draws a trip. Filip Chlapik to the box for tripping. #MNWild to the PP.

Lots of loose pucks in front of Nilsson, but #mnwild not getting to em first

Matt Dumba draws a trip. Filip Chlapik to the box for tripping. #MNWild to the PP.

Stalock aggressive comes out to blocker Paul on a break...Puck was perfectly redirected into open space off the linesman's skate

Fiala TO o-zone, Suter overcommits, Connor Brown breakaway and an aggressive Stalock keeps the deficit at 1

Like every post-Thanksgiving #mnwild matinee I've ever covered, yet they keep on wanting em

I thought the Wild had decent energy to start the game.  All of their lines seemed to be moving well.  They had a bunch of close calls offensively where they just couldn’t quite get to the loose pucks in and around the Senators’ crease.  But in classic hockey karma fashion, the Wild’s inability to bury the biscuit would be repaid by a fluke-y goal by Ottawa to give them a 1-0 lead.  Even though Minnesota trailed by one I still felt if the Wild kept getting the chances offensively it was only a matter of time before they take this game back.

2nd Period Thoughts:  After killing off a Senators penalty to start the period the Wild seemed to lack a little bit of energy a bit and it appeared the Senators might be able to take the lead.  The game appeared to be at a bit of a tipping point momentum-wise and it was the 4th line that provided the initial spark.

Donato finds loose puck after Rask's forecheck, then erupts to the net and roofs a backhander oh-so casually....

Ryan Donato is such a teaser.  He had been struggling in handling pucks earlier in the shift and then he makes this goal look so easy as he deposited the backhander in a pretty small window above the shoulder of Anders Nilsson.  1-1 game.

Ryan Donato absolutely has the makings of a legit goal-scorer if he could just figure out the rest of his game. He made that move look effortless. #MNWild

The Wild’s line of Mikko Koivu, Zach Parise and Kevin Fiala found themselves being outworked and they iced the puck.  Then on the ensuing draw in the Wild zone, they would get caught standing around a bit and Ottawa would re-take the lead as Parise lost his defensive coverage on Brady Tkachuk who buried it by Alex Stalock.  2-1 Senators.

2-1 #Sens. Brady Tkachuk with a blast in front that squirts past Alex Stalock.

Staal pulls up on the rush, feeds Zuccarello and his shot is redirected in by Spurgeon on his 30th birthday.

The ‘ZZ Top’ line answered right back as Eric Staal skates into the Ottawa end, pumps the breaks and finds a trailing Mats Zuccarello who sent a puck towards the front of the goal that was redirected perfectly by a crashing Jared Spurgeon to tie it up at 2-2.  It was a perfect bang-bang play that Nilsson had no chance to stop.

Parise stuffs the puck in short-side to make it 3-2 #mnwild. Then a scrum ensues with Fiala vs. Tkachuk at the center of it.

This was a Wayne Gretzky-style below the goal line kind of goal where Parise banked the puck off the goaltender and in.  3-2 Wild.  Minnesota went back on the attack and the 4th line again provided great energy and even created some excitement offensively.

Hartman swings and misses at bouncing puck. Nearly 4-goal second for the Wild.

Puck comes back to Wild end and Brodin takes a penalty

3-goal, 17-shot period for the #mnwild as they take a 3-2 lead into the third period

It was a great rally by the Wild to take the lead and they did so by taking pucks to the high traffic areas of the ice.  At this point you, as a fan you’re feeling pretty good about how the team responded but you also know your team is holding onto a 1-goal lead and you never feel completely safe in situations like that.

3rd Period Thoughts:  The 3rd period was a bit dicey at the start.  The Senators were flying around working hard for the equalizer and they appeared to have it as Nikita Zaitsev stepped into a slap shot.

2 Zaitsev blasts, one off the left post, then the rebound that Stalock somehow spins back to make the save

Luke Kunin’s breakaway goal gave Minnesota the cushion it needed and the confidence to take this game over.

Another goal from the fourth line, this one a pretty top-shelf goal by Hartman.

This was an absolutely beautiful goal.  Ryan Hartman made a bit of a toe drag around a defender and then fired a laser of a shot top shelf that really got the 17,112 fans in attendance out of their seats.  It was the kind of skilled finish that we hope to see more from Ryan Hartman.  But Minnesota wasn’t done there.

Brady Tkachuk wants all that smoke and Matt Dumba obliges. Both players get roughing minors. 4 on 4 for a couple of minutes. #MNWild

Seeing Matt Dumba and Brady Tkachuk tangled up, one could not help but think of last year in Dumba’s ill-fated fight with Calgary’s Matt Tkachuk (Brady’s older brother) and how that helped send Minnesota’s season into a death spiral.  I think everyone was relieved when the officials stepped in and broke up the scrum before any punches were thrown.

And now the #MNWild will have a 4 on 3 advantage. Colin White called for slashing the birthday boy Jared Spurgeon.

6-2 #MNWild. Eric Staal on the doorstep. Maybe running clock for the final 9:10?

Minnesota would add another on the power play as Jason Zucker lit the lamp to seal a 7-2 rout.

The rout is on.

Even though he didn’t end up on the stat sheet, I thought Carson Soucy had an outstanding game.  He used his size and reach very effectively and I felt he was solid at both ends of the ice.  Its great to see his confidence growing with each game and even though that might not be great news for Greg Pateryn, I think Soucy’s earned that spot.

On the last shift of the game, Wild Head Coach Bruce Boudreau put out the 4th line which was fitting since they really had a great game and provided the initial spark to get Minnesota going.  I thought Ryan Donato, Ryan Hartman and Victor Rask did a decent job at working pucks into the Senators zone and while the two goals were a nice bonus I felt they helped Minnesota build momentum that fed into the Wild taking this game over.  Yes, its the Ottawa Senators, but it was nice to see the team play as well as it did and taking care of business instead of looking like a team that had too much turkey the day before.

C – Matt Boldy (Boston College, H-East) ~ the Wild’s top pick from this summer has had a slow start as he registered an assist in Boston College’s 6-2 win over Yale on Tuesday.  Boldy has a goal, 2 points, 4 PIM’s and is a +1 in 12 games.

RW – Shawn Boudrias (Cape Breton, QMJHL) ~ the power forward had a secondary assist on 3 shots in the Eagles’ 4-3 shootout loss to St. John on Wednesday.  On Thanksgiving the Terrebonne, Quebec-native had 2 goals on 4 shots in Cape Breton’s 4-2 loss to Shawinigan.  Boudrias has 15 goals, 30 points, 36 PIM’s and is a +15 in 25 games.