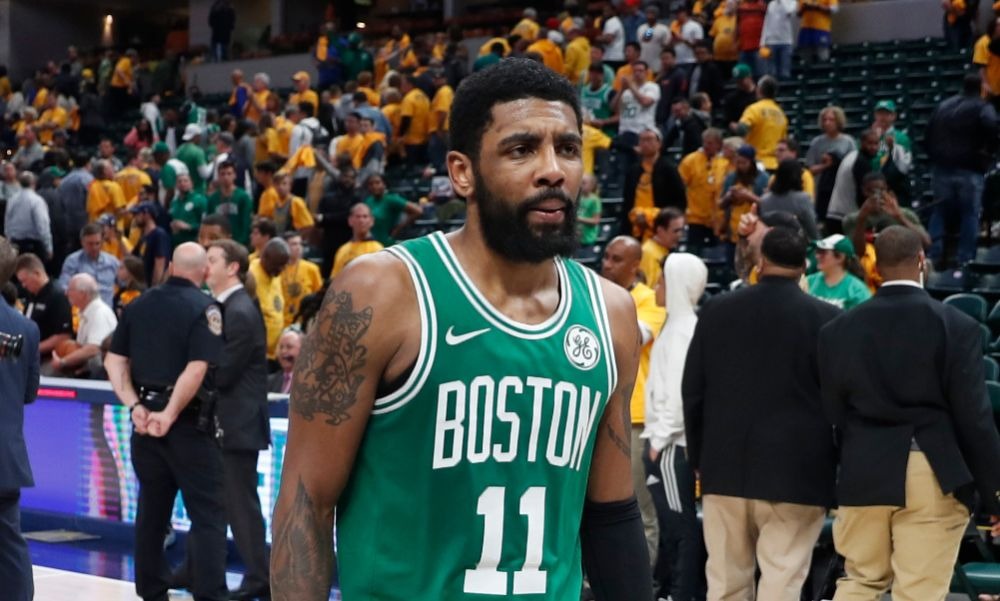 “There is no hard feelings,” Smart said. “I didn’t hug Kyrie to get on TV. It’s two guys that are trying to make a living for their families, being professional athletes. That’s my brother, you know? Regardless of what he did. He works hard.

“And quite frankly, I’m really honestly tired of hearing about Kyrie. Kyrie’s no longer with the Boston Celtics. And it’s a slap across everybody on this team that’s here now to keep hearing Kyrie’s name, because every last one of these guys have put in the work and continue to put in the work, and we’re here and we’re still competing.

And while Irving may be seen as public enemy No. 1 by Celtics fans who blame him for all that went wrong with last season’s team, his ex-teammates have nothing but love for him.

“Everybody asks me everyday about Kyrie; was he a bad teammate? No. He’s a good dude,” Boston’s Semi Ojeleye told NBC Sports Boston. “It’s tough to be him, it’s tough to be a leader. We didn’t have a good year last year and he took the brunt of that which isn’t fair. All 15 guys, everybody in the (front) office, the coaches, we all had a hand in last year. We all learned from it.”

Disney’s “Frozen 2” just opened in theaters, so perhaps this is a good time for Celtics fans to take Smart’s advice and — as they say in the movie — “let it go” about Kyrie.

Obviously, the situation had to come to a head this week, with the Brooklyn-Boston home-and-home series. Although Kyrie managed not to show in Boston, the Garden fans stated their feelings emphatically on Wednesday (and please save any outrage about the booing — Kyrie deserved it after he reneged on his pledge, pushed Celtics fans away, face-planted in the playoffs, and never even said goodbye before bolting).

Even from a distance, Kyrie heard the booing. We know this because he responded with a rambling essay in his pseudo-philosophical style, basically stating that he’s more woke than we are and blah blah blah.

I’m pretty sure we all agree that no one misses his intellectual-sounding BS.

Yesterday, Kyrie did manage to appear in the friendlier atmosphere at Barclays Center, and he shared hugs with his former teammates, proving as always that athletes think differently than fans.

Kyrie Irving showing his former #Celtics teammates some love after the game pic.twitter.com/YQ2JXJSzgb

I think we should respect the Celtics’ calls to move on. Kemba Walker may never have hit an NBA championship-winning shot, but he might one day. He’s certainly capable if he’s ever in that situation. Kemba wants to be here and we’re better off with him. Let’s focus on the guys we have and forget about the one who didn’t want to be here.

The Nets made 17 threes on Friday, marking the fourth time in the last five games that Boston has allowed that many or more made 3-pointers in a game.

But more than anything else, Boston doesn’t defend the 3-point shot with any kind of sense of urgency; that is, until the late stages of games. But by then, too often teams are in a nice rhythm — and even with better defense, that rhythm becomes difficult to break.

“If we’re not going to be a really good perimeter defensive team,” Stevens said, “we’re probably going to be in trouble, because we’re smaller.”

On Friday, the Celtics were not a really good perimeter defensive team, or even just “good”. The Nets got to the rim in the pick-and-roll seemingly at will, as Jarrett Allen racked up 14 points on 7-for-12 shooting, but maybe more notably, Brooklyn shot 17-for-41 from behind the arc — a healthy 41.5 percent.

In NBA history, there have been times when rule changes were made to level off playing conditions. The lane used to be only 6 feet wide. When big men began to dominate the league, the lane was widened to 12 feet, then today’s width of 16 feet. For a while, there were so many great bigs in the pros and college that there was a debate about raising the rim height from 10 to 11 feet.

Today, so many players are so good at shooting from deep, perhaps it’s time to move the arc back a foot or so. I’m not kidding. For today’s players, corner threes are as easy as layups. And consider that almost every single NBA player who’s not a coward seems capable of making threes. We laughed when Aron Baynes started launching them with the Cs; now he’s averaging 43.9%!

Since the line won’t be moving back anytime soon, Marcus is right. The Celtics better figure it out, and quickly. Yesterday, Brooklyn outscored Boston at the arc by 24 points. If this keeps up, the Celts will regret it big-time.

And, finally… About those unis

12. The Celtics 2019-20 City Series uniforms
These are close to being really good, but the font feels like something called “Generic Irish Pub Sign Font” on an establishment that didn’t sell Guinness.

I’m not sure about this list, because it ranks the St. Patrick’s Day jerseys of 10 years ago (the beautiful one, not the ugly sleeved version of five years ago) only 9th overall.

Let’s state for the record that one should never try to replace the Celtics’ classic home white/road green uniforms. But we recognize that the league wants to sell jerseys, so…

After seeing the current City Edition/Irish pub uniforms for two games, my conclusion is that they are far from great but they’re certainly not hideous like the old grey pajamas.

One small change that would’ve helped this time: the black piping that now appears around “Boston” and the numerals should’ve also been added to the player names.

If you despise these uniforms, sorry — you’ll have to endure them 14 more times.

Boston Sports Journal: A predictable flaw re-emerges in Celtics’ loss to the Nets