Your Morning Dump...Where Gordon Hayward is ahead of schedule and eyeing his return 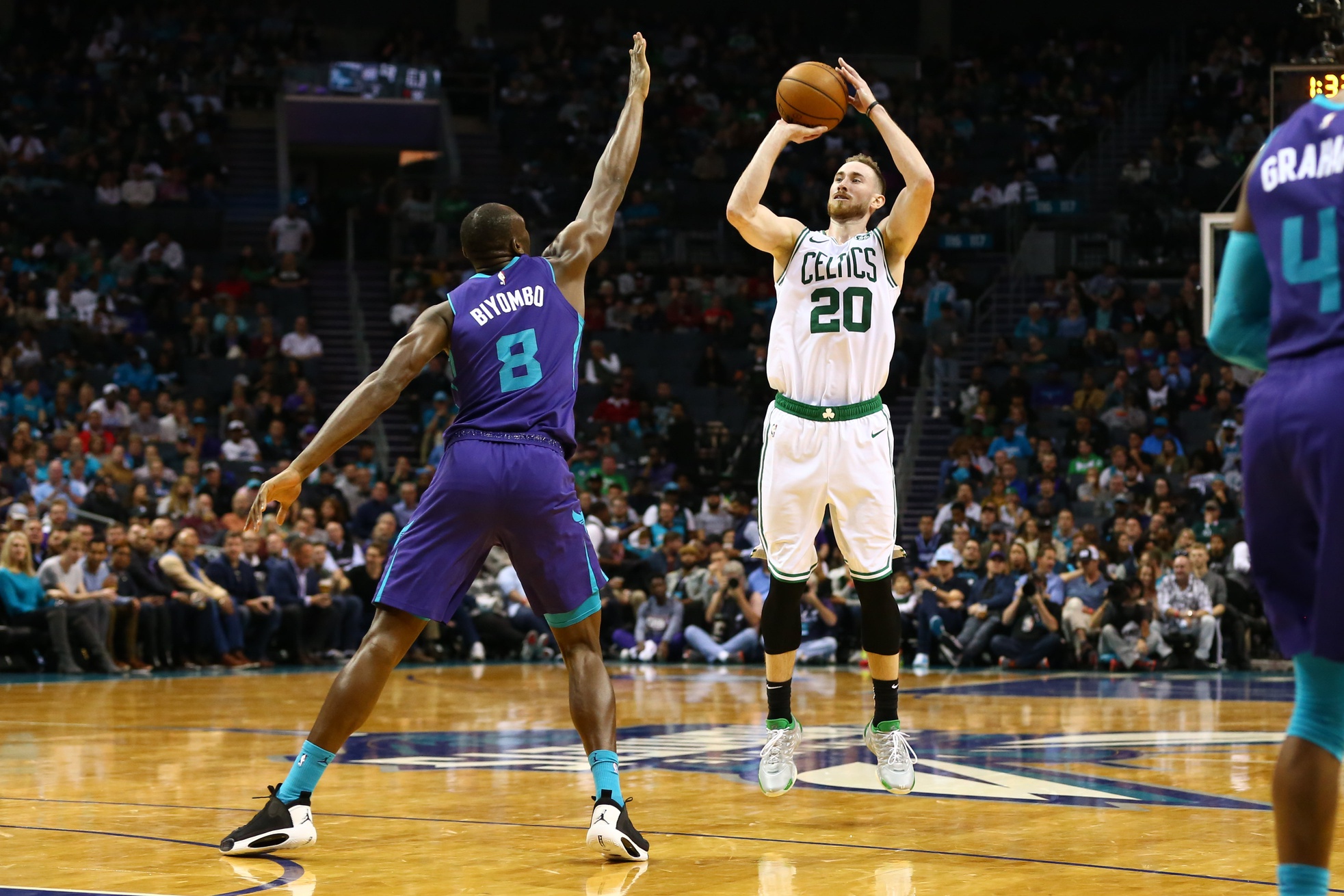 Your Morning Dump...Where Gordon Hayward is ahead of schedule and eyeing his return

As the Celtics limped to 6-4 without Gordon Hayward on Friday in a 112-107 loss to the Brooklyn Nets, the team/star forward offered some encouraging news on the progress Hayward has made.

Boston Celtics wing Gordon Hayward told reporters prior to Friday’s game against the Brooklyn Nets that he believed he was ahead of schedule in his recovery.

“He’s able to do non-contact drills,” Stevens said. “And he’ll have another meeting on Monday over FaceTime with his doctor to look at the healing process, discuss what’s next, and then we’ll know more from there.”

After practice, Hayward remained behind working on his jumper. Over the last week or two, he has ramped up his activity level — he can now shoot and dribble lightly.

“It’s hard to say with these things exactly what the timeline is,” Hayward said on Friday. “But, like I said, I feel good, and most importantly I’ve been able to continue with my leg work and stuff like that, so that’s really important.”

Apparently Hayward has been able to keep up with his conditioning while he’s been on the shelf and that is going to be a huge plus when he returns. While this injury is not even close to as extensive as his ankle injury was in terms of rehab, it’s always a change of pace to make the return to NBA play after missing a few weeks. Hayward has really hit the ground running with this one and seems determined to be 100% immediately when he returns.

Hayward also had some thoughts on his further rehab.

“I’m sure there’s going to be a lot of things that I’m going to have to do — you know, playing contact-wise, making sure that I have some strength in that left hand — before I can put myself out there,” Hayward said. “And luckily we’ll have some practice days coming up that I can kind of work through it a little bit.”

Everything looks optimistic and it feels like we’ll be getting more news on his return soon. While I’m definitely not a doctor, I feel like Hayward should be able to make his return in the next 1-2 weeks more or less.

Long story short: The Celtics need him back ASAP.

Even though their 4 losses without him haven’t been abysmal efforts by any stretch of the word, the Celtics win at least 1-2 of those games if Hayward is in the fold. His impact not only shows in the box score but the offense/defense just looks so much better when Hayward is a part of it. I’ve harped on this “Making the right basketball play” theory of mine for quite some time in regards to Hayward…but it’s true. The eye-test says it all and everything this team does is far more harmonious when Hayward is on the court.He’s looked so sure of himself in his 8 games this season and that confidence will only grow with reps.

It’s frustrating that he went down with another injury but who said this whole redemption tour thing was going to be easy? They failed at battling through adversity last season and it’s something this team needs to be groomed in if they want to reach their peak. There’s been some tough losses without Gordon, but all in all, the ship has been kept afloat. Guys like Kemba Walker, Jayson Tatum, Jaylen Brown, Marcus Smart and even Brad Wanamaker have all stepped up in Hayward’s absence but I’m sure they’re looking forward to getting some more artillery back into the lineup.

Page 2: Where Grant Williams wants some love at the 3-point line

Grant Williams turned 21 as Friday became Saturday at midnight. He and teammates went to Kemba Walker’s home for dinner and what Walker called “some good bonding,”  so naturally the rookie had his first drink.

Asked if it was his first ever actual drink, Williams replied, “Uhhhh … I plead the fifth.”

For the record, he got Hennessy for his premier legal sip. As for presents, no doubt Williams would like to unwrap his first NBA 3-pointer and a win as the Celtics complete their two-game trip here on Sunday afternoon against the Knicks.

He’s still working on his shot, but he knows the solution to making 3s.

“Still shooting it,” he said. “That’s the biggest thing. You can’t worry about your misses, because then you won’t be able to make the next one. So I’m just as fine shooting it, and I’ll take another one and it will go in. That’s my thoughts on it and the team’s thoughts on it, as well, unless they would tell me not to shoot.”

But that won’t happen.

Its been rough watching Grant on offense this season, and by rough, I mean painful. He just can’t seem to get that first 3 to go down and it’s really made things difficult for him to get anything going without it. Teams are sagging off on him and he’s not at the point offensively where he can get his points down low. As he is undersized, he’s going to have to be able to hit that shot with some regularity if the rest of his game is going to open up.

The thing that’s encouraging about it all has been his attitude through and through. He hasn’t let disappointment deter him and the only thing on his mind is getting better. Similarly to when Marcus Smart was honing his 3-point marksmanship, his teammates/coaches also have his back.

It helps him to know how Marcus Smart has risen to become a 3-point threat.

“For sure,” Williams said. “He’s been one of those guys that’s had my back the whole time, because he said he kind of sees me as his mini-me when it comes to him his rookie year and the previous five years, in terms of being that glue guy/offensive guy that necessarily wasn’t the scorer that he is now. But he’s capable of doing it, so I’m just going to keep improving day by day. You can’t rush it. It’s a process. It’s going to be a long season, 82 games, not including the playoffs. So it’s all about competing and getting these wins.”

If he keeps working at it he’ll get that monkey off of his back sooner rather than later. His career won’t be defined by 21 missed shots and he knows that. It’s a long season and he’s just in a funk right now like so many others before him. He’ll hit one, soon, I promise you that.