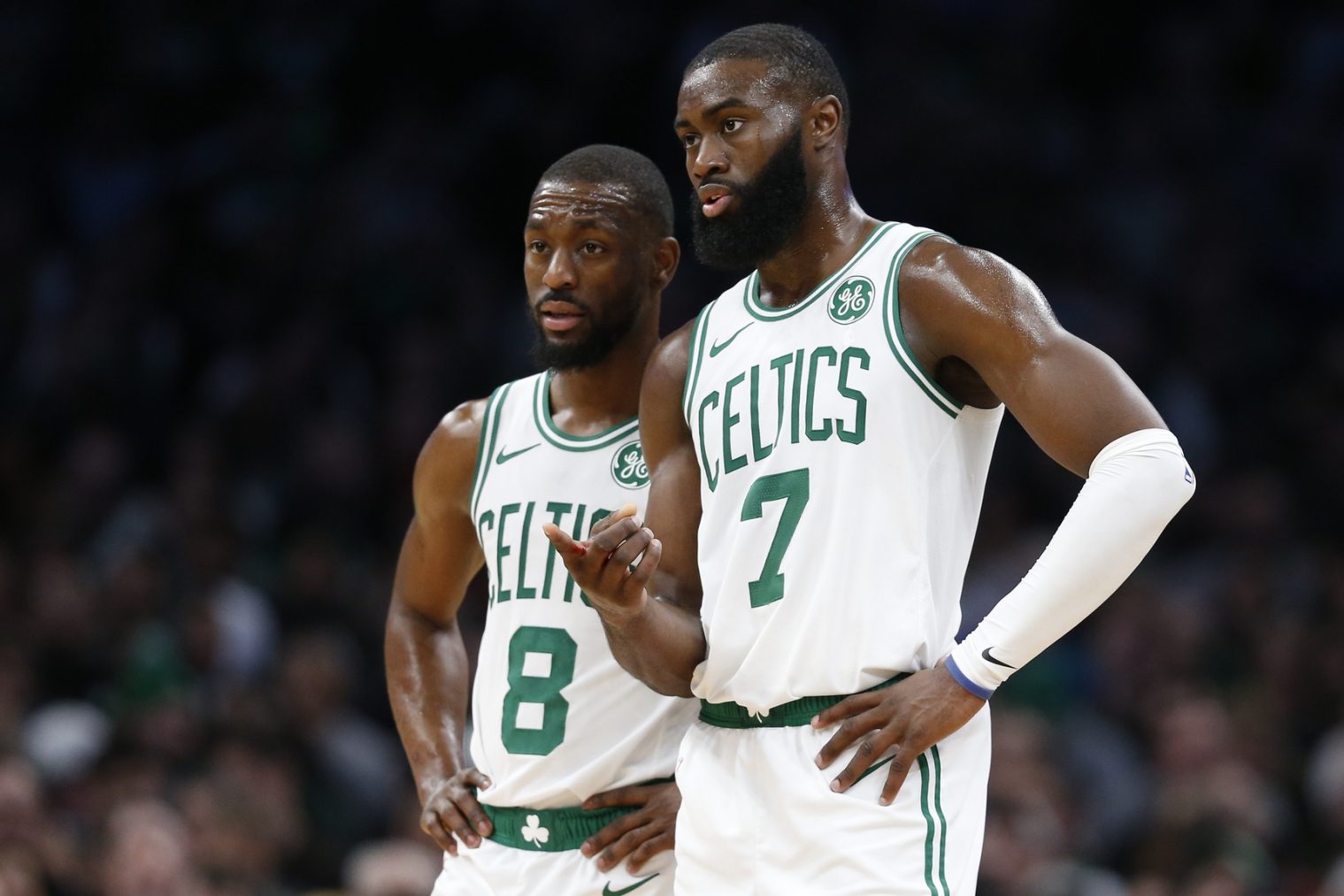 The Celtics beat the brakes off the Heat despite Jimmy Butler having one of his best games in recent memory. LOVE TO SEE IT. Let’s get granular:

Jaylen was the star of the show…
As evidenced in numerous highlights from the Rapid Recap, the primary engine behind last night’s W was:

Yeah. His scoring burst in the third quarter effectively decided the game. You can nitpick Brown’s lack of secondary and tertiary stats, I guess. But his low rebounding didn’t matter with the bench picking up a lot of defensive slack, and having just one turnover against a team that’s usually quite adept on the defensive end is also worth applauding.

…but Kemba’s performance shouldn’t be overshadowed.
In the last several years, three high-scoring guards have begun showing other facets to their game in Boston. Isaiah Thomas became a much better passer and facilitator, and played through contact that most men his size would balk at. Kyrie Irving developed a knack for defensive effort he’d never previously shown, while also becoming a more reliable assist man.

Now, Kemba Walker is showing signs of being much more of an all-around player than his tenure in Charlotte might have suggested. The basics of his box score last night show as much (28 points, 4 rebounds, 7 assists, 2 steals, 1 block, +16), and he’s either already improved or is on track to top his past numbers in many advanced categories (offensive and defensive ratings, true shooting, box plus-minus, three point attempt rate and some others) while lowering his usage rate and turnover percentage. His assist percentage is down, but that’s not shocking given how Boston is so closely focused on ball movement under Stevens. And from the eye-test perspective, consider how last night you saw him lock his Heat counterpart, the high-scoring Kendrick Nunn, down to 8 points on 27% shooting.

The bench contributed all around…mostly.
Boston’s scoring was largely concentrated in the Brown-Walker-Tatum trio. But the bench still brought a great deal of energy, especially on defense. Semi Ojeleye had another strong effort on that front as a small-ball big (just 5 points, but 7 boards, a steal and a +21). Robert Williams showed us his first-ever double-digit rebounding performance (10 boards) and had two utterly devastating blocks, though one was counted against him as a foul (it was a damn block!). Couldn’t find a video, but hip-hop scholar and Boston sports diehard Dart Adams described it eloquently:

Robert Williams closed to block someone shooting a three pointer. Do you have any idea how HIGH the arc on that shot was at the point he swatted it then CAUGHT the bish?

On the guard side of things, Brad Wanamaker and Carsen Edwards didn’t necessarily shoot well, but contributed in other respects.

The only real bench negative was Enes Kanter, and Brad limited his minutes accordingly upon seeing how badly he was getting torched. In his mild defense, there is no universe in which Miami is a good matchup for him, but this was incredibly bad:

Theis was great, but the “should Boston get a center tho?” conversation won’t end yet.
I mean…there’s some legitimacy to it. Williams is still working kinks—defensive lapses, inexplicably poor in-possession decisions—out of his system; casualties of moving freely back and forth through time like Dr. Manhattan or Rust Cohle. If you can’t keep Kanter on the court for defensive problems, his offensive strengths aren’t as valuable as they should be. Vincent Poirier, surprising no one, looks like an incomplete project and was just assigned to the Red Claws. Theis, due to size, is gonna get sonned by opposing centers a bit more often than a starting big should be.

But Theis presents far fewer problems than the other three due to a more balanced skill set. And let me restate that he was excellent last night: 8 points, 9 boards, 2 assists, a steal, 3 blocks and a team-high +31.

Grant had his first start. It wasn’t great. I’m still not particularly worried.
His first six minutes coincided with Miami’s “engaged” portion of the ballgame, which wasn’t great; it led to him being torched several times by both Jimmy Butler and (especially) Bam Adebayo. Ojeleye’s strong performance largely resulted from Brad cutting bait on Grant in his favor.

First time #Celtics Grant Williams touches the ball as a starter, he gets an assist. #winningplays

Grant Williams is less than eight weeks into his tenure as an NBA player. So his offensive struggles shouldn’t be that surprising. And he’s already showing evidence of other skills that rookies don’t always exhibit early. While it’d definitely be better if we saw points from him other than at the free-throw line, I think it’s foolhardy to think he’s somehow doomed to career-long offensive inefficiency based on this limited, early evidence.