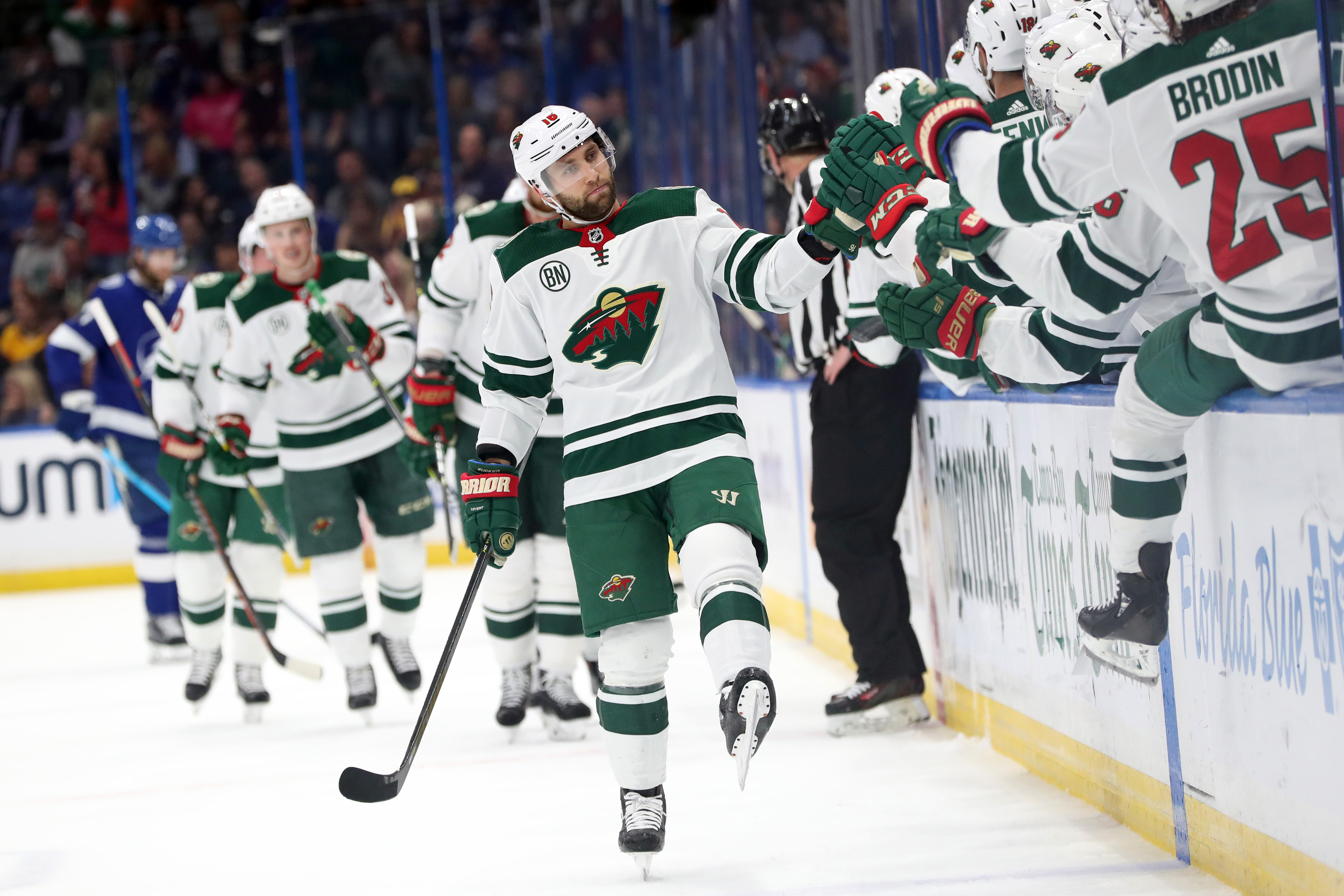 If there is almost anything we’ve learned about this Minnesota Wild team, is they have more pride and are playing more as a team than perhaps they have in the last 6-7 years.  Like the old Wild teams of the past, the club has to win through a collective effort than simply being carried by one or two players as is the case with many other teams in the NHL.  The Wild are playing like a team that is greater than the sum of its parts, somewhere near Miami where he’s enjoying the retired life, Jacques Lemaire would be smiling.

On the flip side is the Tampa Bay Lightning who blew out opponents last season with an overwhelming force of offensive talent.  Fast forward to this season and instead of leading the Atlantic by 20 points like they may have done a season ago, they find themselves near the bottom of the division as offense has been hit or miss.  Can the Wild earn another big road win in Tampa Bay?

1st Period Thoughts:  Minnesota was controlling the pace through the first few minutes, as they worked pucks deep and got their forecheck working.  Yet it was the Lightning that struck first as Erik Cernak ripped a shot from the high slot that beat Alex Stalock who was partially screened by Nick Seeler.  1-0 Tampa Bay.  The goal seemed to spark the Lightning to move their feet a bit more and the Wild would be chasing around its own zone.  Minnesota would answer back with its 4th line as Ryan Donato set up a crashing Seeler who got off a quick shot that was stopped by Andrei Vasilevskiy and Seeler would gather up his rebound and try again and this was stopped by the shoulder of the Tampa Bay goalie.  Minnesota’s pressure would draw a penalty and give the Wild its first power play.  The Wild would try to work for a deflection as Brad Hunt tried to find Jason Zucker for a redirection but he couldn’t get enough on the shot to get it on goal with much pace.  Minnesota would give up a dangerous 2-on-2 shorthanded but a nice backcheck by Luke Kunin would foil Tampa Bay’s opportunity.  A few minutes later the Wild had a great chance as Eric Staal set up Zucker for a quick backhander that was fought off by Vasileveskiy.  Minnesota would have a 4-on-1 break into the Tampa Bay zone but as Kunin tried to set up Jonas Brodin for a chance that just failed to click.  The Wild would then hold the zone and the puck was worked down low to Jordan Greenway who used his big frame to shield the puck and then fed a perfect pass out front to Joel Eriksson Ek who ripped it by Vasilevskiy.  1-1 game.  Minnesota would strike again moments later as Mats Zuccarello fed a pass to Staal who made a quick pass across to Zucker for an easy tap in goal.  2-1 Wild.  Before the announcer could get to announcing the Wild’s 2nd goal, Minnesota would add to its lead as Carson Soucy would feint at a pass and with no other clear options he’d send a shot on goal that would deflect off Victor Hedman and behind Vasilevskiy.  3-1 Wild to a befuddled look from Lightning Head Coach Jon Cooper who watched his team give up three goals in just 1 minute and 41 seconds.  The Lightning tried to answer back and it was Steve Stamkos firing a shot that was steered aside by Stalock.  Tampa Bay was clearly a little annoyed and started to ramp up their physical play as Kevin Shattenkirk stapled Seeler to the boards with a big hit.  The hit seemed to get Tampa Bay moving with more purpose and they’d cut the Wild lead to one as Mikhail Sergachev would race around Brodin and beat Stalock on the short side.  3-2 Wild on a fairly soft goal given up by Stalock.  The Lightning really put the Wild on their heels in the closing minutes of the period and they’d draw a penalty on Eriksson Ek.  The last few seconds looked like a shooting gallery as Stalock stretched out to stop a slap shot by Hedman in the closing seconds of the period.  Wild had to feel lucky to have a 3-2 lead going into the 1st intermission.

2nd Period Thoughts:  The Lightning had about a 1:30 left in power play time left and Minnesota’s penalty killers did a decent job at forcing Tampa Bay to the perimeter.  In the closing 20 seconds of the power play, the Lightning clearly had too many men on the ice to no call much to the chagrin of Wild Head Coach Bruce Boudreau.  The Lightning continued to swarm and circle around the Wild zone as they were sending pucks through the middle of the ice and just not connecting.  Minnesota’s skaters were out there for well over 2 minutes as the Lightning kept the Wild bottled up in its own end.  Stalock had to be sharp as he had a few sprawling stops to keep Minnesota ahead by one.  The Wild tried to answer back with its 2nd line of Luke Kunin, Zach Parise and Kevin Fiala and it was Fiala moving into the slot and firing a shot high and wide but Tampa Bay would counter with a 2-on-2 rush that was broke up nicely by Brodin.  A few minutes later, Luke Schenn would high stick Parise to give the Wild a power play.  On the power play, Zuccarello threaded a great cross ice pass to Staal who was wide open on the back door and Staal’s shot rang off the right post as he had Vasilevskiy beat.  The Wild would come up empty on the power play but Minnesota was playing well defensively as Soucy made a nice steal near the Minnesota blueline and he’d skate the puck into the Lightning zone and drop a pass back to Ryan Hartman who blasted a shot on goal that was steered aside by Vasilevskiy.

Fantastic play by Carson Soucy. Leads to a nice rush, but Lightning do a good job breaking it up. pic.twitter.com/FQiLAek1PI

Nick Seeler would get tagged with an interference penalty giving the potent Lightning power play another opportunity.  Tampa Bay had a great chance from in close as Brayden Point was stonewalled by Stalock.  Minnesota would kill off the penalty and the Wild would try to back on the attack.  At times the Wild almost appeared relaxed in the offensive zone, content to send long range shot on goal and hope for a deflection.  Tampa Bay would tie the game late in the period as Anthony Cirelli went forehand to backhand as he fell down as he was hooked by Hartman and Cirelli crashed into the crease and the puck slid into the back of the net.  Minnesota took a look at the monitor but they wouldn’t need to as Hartman was given a hooking penalty and the goal was called off for goaltender interference that drew a chorus of boo’s from the home crowd.  The Lightning power play went to work with an all business attitude and they set up Hedman for a blast that blazed by a well-screened Stalock.  3-3 game with a little over a minute left.  Minnesota would take the lead back as Soucy would be left open and with no other options he’d wind up and let go a slap shot that Vasilevskiy stopped but Victor Rask was there to tap home the rebound.  4-3 Wild going into the 2nd intermission, huge goal.

GOAL. Victor Rasks scores to reclaim the Minnesota lead with 36 seconds left in the period. pic.twitter.com/l06z2C1FDQ

3rd Period Thoughts:  The Wild looked a bit relaxed to start the period as Alex Killorn powered by Matt Dumba and he wired a shot by Stalock.  4-4 game.  Minnesota would answer right back as Zuccarello got a little room and he fired a laser by Vasilevskiy.  5-4 Wild.  The game appeared to be going end to end, but Minnesota was not giving the Lightning too much room to get comfortable and they were taking the body to force Tampa Bay to settle for dump ins and shots from the perimeter.  Joel Eriksson Ek would get called for holding the stick.  Tampa Bay was clearly a little frustrated as Minnesota’s penalty killers was pressuring the puck carrier as Stamkos broke his stick in disgust after he felt he was slashed to no call.  The Wild’s would kill the penalty as Stalock made a few key stops giving Minnesota a feeling of relief.  The Wild were playing pretty safe, but when they’d let up just a bit it was Stalock making some great saves from close range to keep Minnesota’s 1-goal lead intact.  Minnesota was really sitting back and simply defending their lead with only a few token attempts to counter attack.  Soucy continued to impress with his physical play and poise with the puck to make the smart play.  The Lightning would pull Vasilevskiy for an extra attacker and it was a frantic 45 seconds as Tampa Bay was sending every puck they could but Minnesota had circled the wagons around Stalock as they blocked shots.  After a late icing call, the Lightning called a timeout with 1.8 seconds left.  The Lightning would win the draw back to Nikita Kucherov and he’d fire a shot high that was gloved by Stalock for the win.  5-4 Wild.

Another big win for the Wild, this time without Jared Spurgeon and Mikko Koivu and exhibiting tremendous resilience by answering back multiple times to keep the Lightning from gaining momentum.  They were outshot badly for a 2nd straight game in a row, but they’re making the most of their opportunities and outworking teams in the right moments.  Another impressive road win for the Wild.

LW – Kirill Kaprizov (CSKA Moscow, KHL) ~ the skilled winger met with Wild General Manager Bill Guerin shortly after he had an assist on 3 shots in CSKA’s 4-2 loss to SKA St. Petersburg.  Kaprizov has 16 goals, 30 points, 4 PIM’s and is a +10 in 30 games.

High School Hockey Report:  The latest hockey rankings are in from Let’s Play Hockey for both Girls and Boys Hockey in Class A and AA.  Here are the rankings for the week of November 27th, 2019.