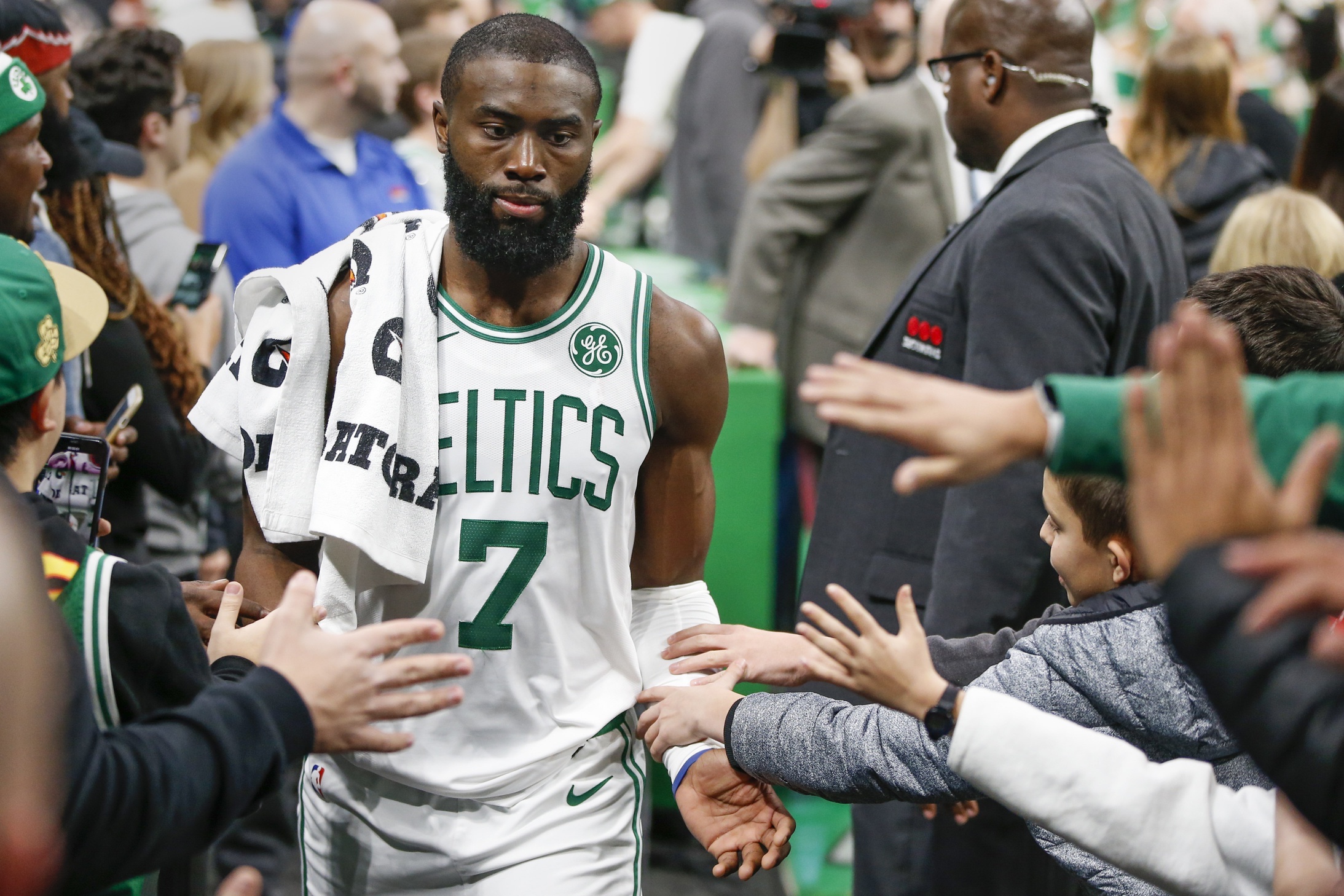 “When [Brown] has it going, he definitely gives us a lot more options,” said Walker. “He’s been playing well all year. I’m excited for him. He’s put in a lot of work each and every day, and it’s showing on the court.”

It’s not just the big scoring night but how Brown did it. He hit a lot of jump shots but also had instances where he bullied his way to the basket against quality defenders such as Bam Adebayo and muscled home tough finishes around the basket. Brown also got to the line a team-high eight times, accounting for a quarter of Boston’s total free-throw attempts.

At a time when Boston’s offense has slumped while Gordon Hayward rehabs a broken hand, Brown has tried to pick up some slack. In the 12 games without Hayward, Brown is averaging 20.4 points while shooting 48.4 percent from the floor and 41.4 percent beyond the 3-point arc. He’s adding 7.2 rebounds, 1.9 assists, and 1.4 steals per game.

Brown is making teams account for him. The only thing clogging his path to All-Star consideration is Boston’s depth. Still, the strides Brown made this summer have forced the rest of the league to take notice of how far he’s advanced.

I’m shaping up to be very, very wrong.

Now, before you petition Chuck to ban me from writing the Thursday Dump (don’t worry, there’s a self-imposed ban coming next month anyway as my wife and I welcome our first child into the world. Perhaps we’ll name her/him Jaylen so you all know how truly sorry I am), hear me out:

When we make our selection each year for most disappointing player, I’m making a choice on who will disappoint relative to expectations. Expectations coming into this year, Jaylen’s fourth, were high. We made our selections prior to the resolution of Brown’s contract situation. I figured that Jaylen, who seems like an over-thinker given his cerebral nature, might press this season with contract uncertainty. I also have a connection through a friend that coaches college basketball in Indiana, and who knows a former Celtics assistant coach, that Jaylen’s agent was in the ear of the front office and coaching staff last season pining for more of an opportunity for Brown. Jaylen’s demeanor and make-up, plus pressure from his agent made me think that he would fall short of expectations we had for him, and that he and his agent had for himself.

Then, breaking from recent tradition, Danny Ainge locked in one of his restricted free agents near the end of his rookie contract, and with a large, new contract Jaylen Brown could just play basketball. Jaylen Brown, for one of, if not the first times in Boston, felt wanted.

As Chris Forsberg mentions in the article linked above, Jaylen was booed on draft night. I was at the Garden that night, it was loud. The Jimmy Butler to Boston rumors reached a fever pitch mere seconds before the pick was locked in, and whether those rumors were legitimate or not, they added to the frequency and volume of the vitriol as the Jumbotron showed Brown walking on stage while affixing a Celtics cap to his dome.

As a lottery selection, JB likely assumed he’d be joining a team where he’d have a chance to get minutes, and usage, and be seen in the eyes of fans as a possible franchise savior. But he came to a Boston team that had finished in the top half of the Eastern Conference and one that was readying its sights even higher once they signed Al Horford that off-season.

Jaylen didn’t play much, but when he did, he was expected to fit in, play within himself, and limit mistakes. When he didn’t do that, he was yanked. He played his best as the season wound down, with the Eastern Conference Finals all but over against Cleveland, in blowout games that felt like meaningless regular season games on a bad lottery team. Brown got to be himself, make mistakes and take shots. He had 19 points in game two, the Celtics lost by 44 point.

The next season, when Kyrie Irving went down, it freed Brown physically and mentally to again be himself. His 2018 post-season performance felt like a coming out party. Then, 2018-19 happened. Brown took the brunt of Kyrie Irving’s criticism, it sent him into a funk, and he had to work his way through a disappointing stretch of basketball.

That brings us to this season — one in which I thought Jaylen would continue to progress in fits and starts, taking one step forward and two steps back as he played for his contract, and for his sense of belonging.

And while getting the contract taken care of was step one, finding permanent sense of belonging here in Boston was step two. It seems like he’s finally really found it. He’s on a team that needs him if it’s going to realize its potential. He has fans that cheer him on whole-heartedly. Feeling like you belong, whether you’re a new student in a classroom, an employee starting a new office job, or an athlete playing NBA basketball is damn important. Sense of Belonging/connectedness, along with self-regulation and intrinsic motivation, are the three most important underlying factors in determining whether a student can be successful in school (trust me, I work for an education company and was a teacher before that and I stayed at a Holiday Inn Express last night), and those three factors apply to both kids and adults. It seems Jaylen’s always had the other two characteristics, but that third piece, that sense of belonging was missing.

I guess I indirectly contributed to that by assuming he’d disappoint again this season. Chuck let me hear it when I wrote that prediction. He was right. I was wrong. Jaylen belongs, and as a basketball player, it seems like he’s just getting started.

On page 2, as the Cs look for bench consistency, Semi seems ready to provide it

“We played harder,” Brad Stevens said, when asked what the key to the turnaround was.

He stopped, but the assembled media was waiting for more. The silence was a little awkward.

“That was the key,” he reiterated. “We played harder.”

Journalistically, we had the answers to three of our five key questions. The what that changed was the effort. The when was the start of the second quarter. The where was the defensive end of the floor.

Semi Ojeleye was the who and the why.

“Defensively he’s in the right spot, he’s where he’s supposed to be,” Brad Stevens said after the game. Stevens played Ojeleye the entire second quarter and then, instead of going to Grant Williams like he did to start the game, he went with Ojeleye for the entire third. “He plays with good physicality and he got a number of deflections in the paint just by being in the right position… He was really good. I don’t think it was a coincidence that those 24 minutes were our best 24 minutes defensively tonight.”

From game one of the season in Philly it’s been glaringly obvious that the Celtics, as constituted, were going to need heavy usage and big contributions from its 5 best players every night, because after that, the bench was one big question mark.

Slowly, over the first quarter of the season, we’re starting to get some answers. One of those answers is Brad Wanamaker, who has emerged as the primary back-up ball-handler. Currently fighting his way through the quagmire of bench uncertainty is Semi Ojeleye, who endured a few DNP-CD’s earlier this season and now feels like a crucial role player. Ojeleye is hitting more of his corner threes, and against a team like Miami, he’s going to match energy and strength with energy and strength. Against the other formative foes in the east, Ojeleye is a guy we want out there — banging with Giannis, squaring off against Toronto’s depth, switching on to any one of the Philly big wings. He showed it last night against Miami and it feels like he’s in the rotation to stay.