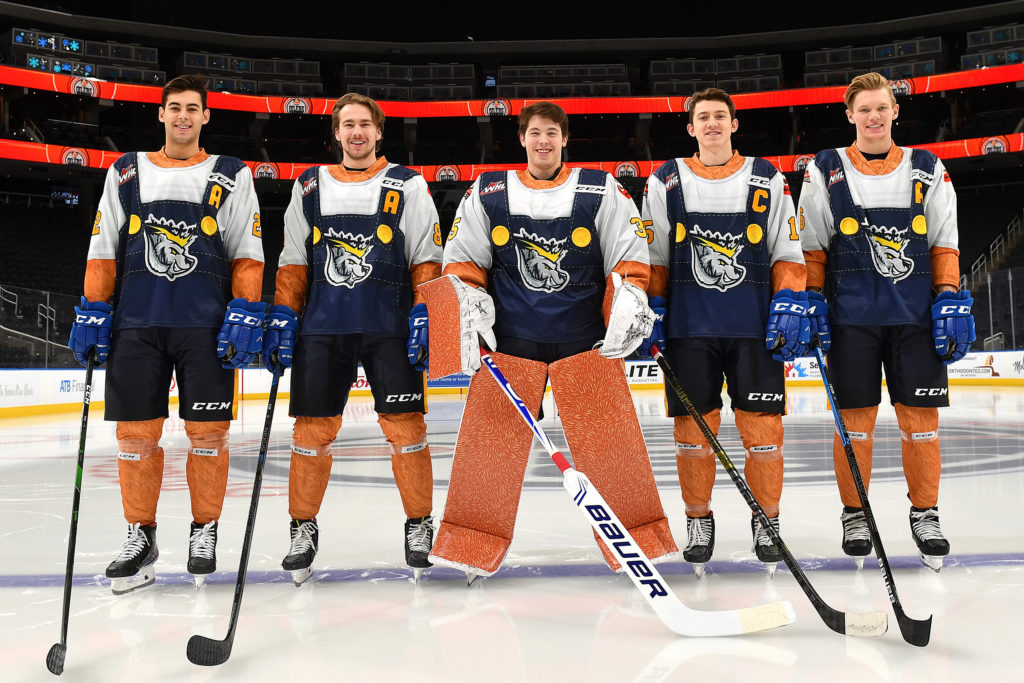 December. In Edmonton, it brings snow and sub -20 Celcius weather but also it brings plenty of stuffed animals flying at Rogers Place.

On Saturday night, the Edmonton Oil Kings play their 13th annual Teddy Bear Toss game where they’ll take on the Calgary Hitmen in the second half of a home and home series.

The annual game always results in three things happening, 1) thousands of stuffed animals are donated to 630 CHED’s Santa’s Anonymous which donates the bears to thousands of kids in the Edmonton area. 2) Jerseys are auctioned off post-game with all of the proceeds going also to Santa’s Anonymous.

This year’s jerseys see overalls being added to the usual bear fur on the player socks and tail on the back of the jerseys. Todd Scott’s goalie setup may be one of the most unique in all of hockey as he’s taken the next step of having his pads and blocker resemble full bear fur!

While all the talk of the Teddy Bear game, is fun there still is the aforementioned first game of the home and home series for the OKs to handle on Friday. The Battle of Alberta so far has been very much in the favour of Edmonton as so far they lead the season series with the Hitmen three games to one with the lone Calgary win coming back in September.

With the Christmas break looming the Oil Kings sit on top of the WHL’s standings with 42 points while the Hitmen are in a wildcard spot in the Eastern Conference with 32 points.

Riley Sawchuk, Jake Neighbours, and Josh Williams have led the way in scoring as all three have 30+ points this season with Sawchuk on top with 34.

Goaltending wise, Sebastian Cossa has led the way with a mark of 10-2-0 while Dylan Scott has also been up to the task in between the pipes with a mark of 7-4-4.

This year the Oil Kings have also made their way onto the CHL’s top 10 list sitting as high as second and in the most recent pol received one of the honourable mentions along with fellow WHL side the Portland Winterhawks and the QMJHL’s Rimouski Oceanic.

Brad Lauer’s bunch have only improved upon last year’s strong campaign and with two more potential wins this weekend, this is looking like a team that could truly come out of the West as a team we’ll see playing this spring in Kelowna at the Memorial Cup. 7PM is the start time for both games on Friday and Saturday.