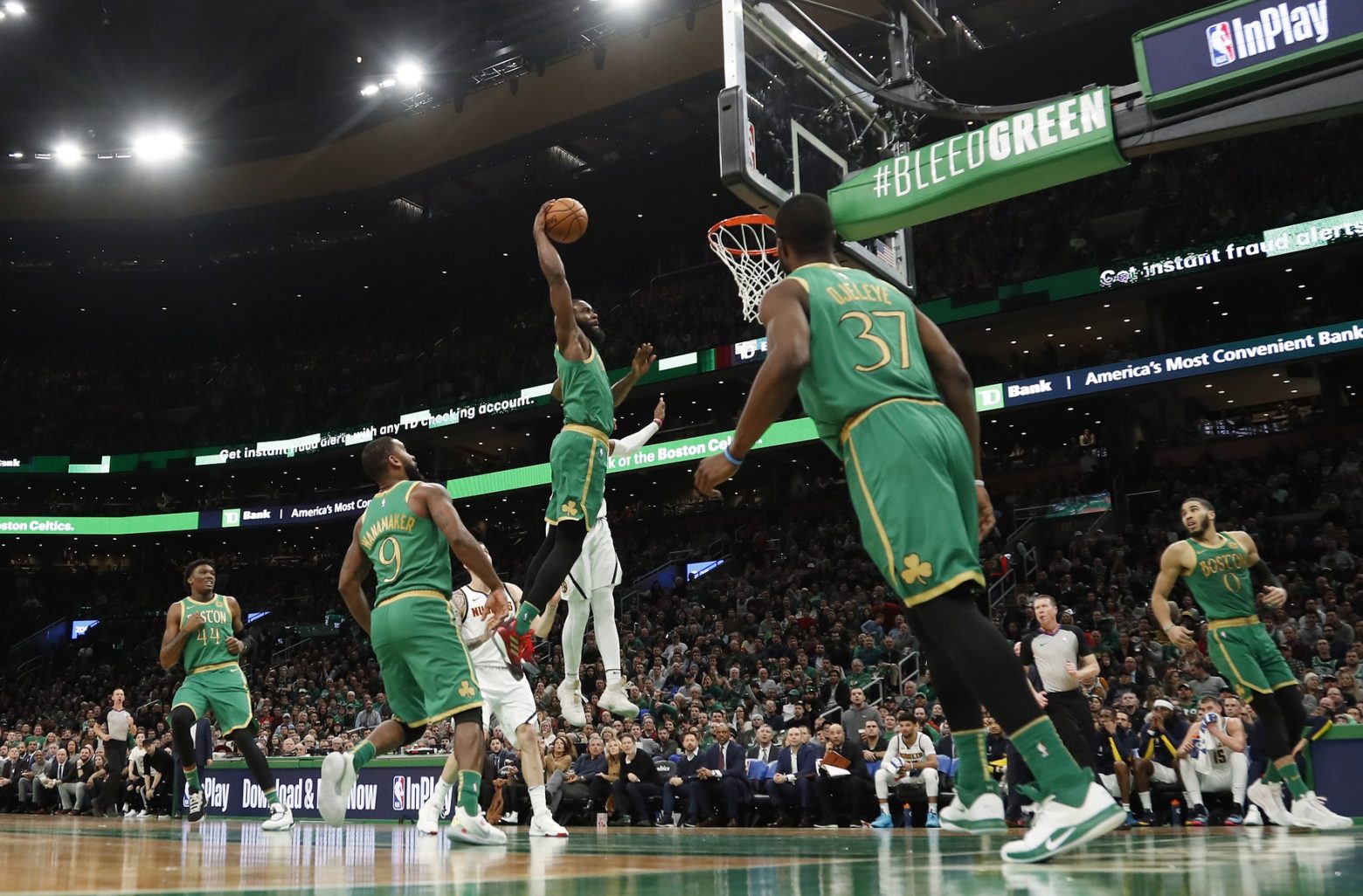 Last night’s game was what they sometimes call a “statement win.” The Boston Celtics showed that even down a star, they were capable of beating an opponent like the Nuggets, a squad that a reasonable number of NBA media and fans might consider better than the Cs. A squad that, just as much as the L.A. teams, Houston, Milwaukee, Philadelphia and Toronto (don’t even think of suggesting Dallas), is openly chasing an NBA Finals berth.

And the Cs basically punked them. Let’s get granular:

JAY TEAM
As stated. Mike D. had this in his Dump post this morning, but there was no way not to duplicate its use:

My prediction that Kemba Walker would be the Celtics MVP was for this season. After that? Pretty much immediately after that? The team would belong to the Jays…but maybe it does already? Or will very soon?

Jayson has averaged 23.4 points over the last five games, with Jaylen right behind at 22 (that lone stinker in the Brooklyn encore drove it down). They’ve been the offensive fulcrum, including in some contests where Kemba has been a little iffy with his shot, and they’ve also contributed stout defense through much of this stretch, especially Jaylen.

It’s probably most accurate to say that Kemba, Jayson and Jaylen at present constitute a truly egalitarian Big Three (as opposed to, say, LeBron’s Big Three in the later years of Miami or Cleveland Parte Deux). And if Gordon Hayward returns at the level he’d reached before the relatively minor hand break, they’ll be a Big Four.

But the franchise, long-term, is absolutely in the hands of the Jay Team. And they’re some confident-ass hands.

Boston made a savvy choice to let Jokic cook and neutralize all other options.
Every single team and coach wants to execute well against every member of the opposition (including the other coach!), of course. But when there’s someone facing you who is better than any individual member of your team, sometimes you let him do his thing and make sure he has no help.

Nikola Jokic recovered from his early foul trouble (getting hit with just one other personal the rest of the contest) and played outstanding ball. But no gaudy assist numbers for him this night, because Boston’s defense pulled out all the stops to make Denver’s oft-potent offense useless: switches, perimeter lockdown, transition D, forced turnovers via shot-clock violation, double- and triple-teams against players who don’t often see them and aren’t used to wriggling through them (as Jokic can sometimes). Jamal Murray wasn’t able to take a large volume of shots and was abysmal on the ones he got, as were Will Barton, Gary Harris and Paul Millsap.

The shooting may not always be as excellent as last night…but let’s celebrate it anyway.
Because why wouldn’t you bring this up?

It seems relevant, given Denver’s improvements on defense over the past two years from “basically sentient traffic cones” to “NBA leaders,” that they had no ability and at times seemingly no interest in letting Boston run the table offensively. It’s not as if the Nugs are mired in a losing streak; far from it. And lest any contrarian mutter “but they were on a SEGABABA tho,” it was against the Knicks, and they won by almost 40 points. The Nuggets simply looked more mortal against this Celtics offense than they have for much of the season, against anyone.

Another solid production run at the Ojeleye Factory.
The offense may never really be there with Semi Ojeleye. Three years in, it’s not unreasonable to think that. But for much of this schedule stretch where Hayward has been out, Ojeleye’s defense has been dependably strong, shutting down people who you’d think might give him a ton of trouble—Justise Winslow of the Heat on Wednesday, Paul Millsap last night—with relative ease. It just goes to show that you may not need a perfect shot to find a place in this league, so long as you’ve got a toolbox, a lunch pail…and a Thick Jacked Frame.

Grant has no luck from deep, not yet.
We close out a fairly happy set of Rational Thoughts with one less happy observation. Grant Williams had the perfect chance to break his three-point-shooting drought late in the fourth, with the game blown open and Brad Stevens fully permissible of garbage-time experiments.

So Grant shot, and missed. Oh well. The painful part was when he shot a second one, missed, grabbed his own long-range rebound, shot again from the same spot…and missed again. If not for that last bit, I wouldn’t have even brought it up.

For the record, Brad Stevens does not care:

Brad Stevens on Grant Williams’ outside shooting skid: “I’m not worried about it one bit. I told him that yesterday.”

Said he moves the ball well, defends well and he’s going to be a really good player.

*I’ve been swearing much less in these—by choice, it may shock long-time readers to know! But I couldn’t resist the phonetically rendered bray.