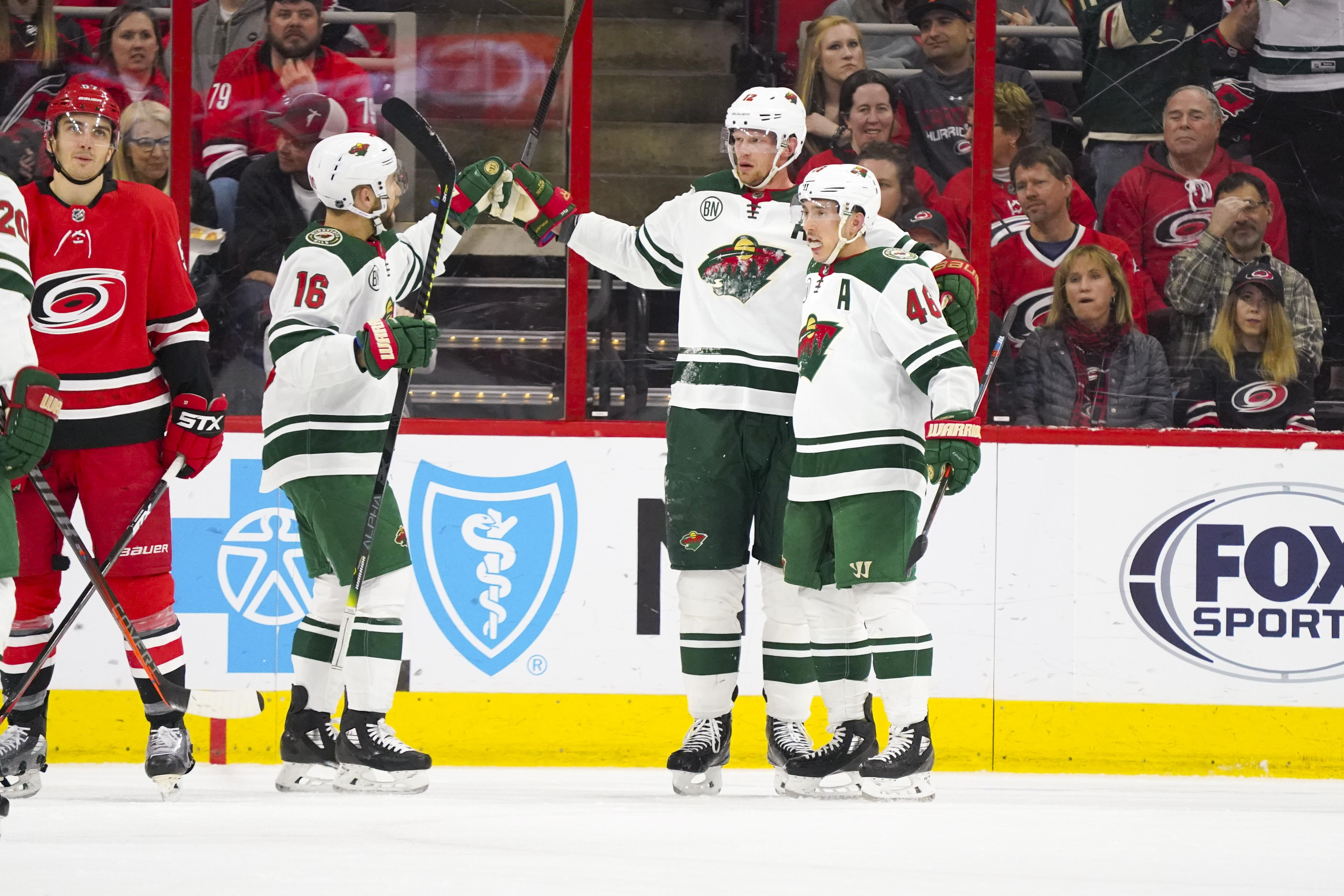 To add an element of variety to the Fox Sports Net North broadcasts of Minnesota Wild games as well as their radio broadcasts, the team has been having guest analysts (TV) and play-by-play men (radio).  On this road trip, former North Stars player, coach and general manager Lou Nanne has been the guest analyst and what a treat that has been.  Nanne is so connected to every level of hockey in the State of Minnesota its incredible and he’s also a very polished hockey commentator and that has been on full display these last few games.  His insight and his ability to provide concise yet not too technical insight mades theses last few games extra fun to watch.

The Wild make their way to Raleigh to play the Carolina Hurricanes, a team that I have felt has kind of humiliated the Wild the last two seasons.  Minnesota lost to the Hurricanes in overtime in St. Paul, but that was a far different group than the resilient club they appear to be now.  Can the Wild make it a perfect 3-for-3 road trip with a win over the Hurricanes?

1st Period Thoughts:  The GEEK line was flying around the ice to start the game as they asserted themselves with their speed and physicality early.  Jordan Greenway was especially active as he was throwing his 6’6″ 230+ lbs frame around and The energy created by that line would help provide the time and space necessary as Jason Zucker turned on the afterburners to gain a step on a defender and he’d feed a puck from beneath the goal line to Mats Zuccarello for a quick chance that Petr Mrazek fought off.  Minnesota kept up the intensity and the Wild’s 4th line would strike first as Marcus Foligno fed a puck to Ryan Donato who directed a puck off his skate that Mrazek stopped but he couldn’t prevent him from cashing in on the rebound.  1-0 Wild.  The Hurricanes would try to answer back with its top line as Sebastian Aho chipped a pass towards the Wild crease to Nino Niederreiter that was stopped by an alert Alex Stalock.  The Wild started to sit back and play more defensively.  Minnesota was a bit reckless with the puck as Kevin Fiala sent a lazy from deep in the Wild zone through the middle of the ice that was intercepted by Ryan Dzingel and his shot would miss high and wide.  The Hurricanes would even the game a few shifts later as Dzingel set up Lucas Wallmark all alone in the slot for a goal.  1-1 game.

The game had opened up and the Hurricanes were taking more chances to shoot the puck as Jacob Slavin stepped into a slap shot that missed wide that had Stalock reaching to try to get a piece of it.  Minnesota’s 4th line would cause some havoc early as Brad Hunt‘s point shot was redirected by Donato that gave Mrazek a little trouble.  The Wild would give the Hurricanes the first power play of the game, as Joel Eriksson Ek and Greenway both got sent to the box to give Carolina a two minute 5-on-3.  Greenway got the 2nd penalty for tripping up Trevor van Riemsdyk.  Minnesota’s penalty killers did its best to stay in a tight triangle in front of Stalock.  Minnesota was keeping Luke Kunin leaning towards Dougie Hamilton to try to take away his big shot, but the Hurricanes would score as Teuvo Teravainen found Andrei Svechnikov with a diagonal pass for an easy tap in that Stalock had no chance on.  2-1 Hurricanes.

GOAL. Andrei Svechnikov scores on the 5-on-3. Still 1:09 remaining on the Carolina power play.

The Hurricanes now had a 5-on-4 power play for nearly another minute.  After a key shot block by Ryan Suter, the Wild would clear the zone and Minnesota got the kill.  Just seconds later, Slavin would get tangled up with Eric Staal giving the Wild its first power play.  Minnesota didn’t do much on the man advantage as Dumba seemed to be struggling mightily while playing on the right side.  The only notable thing that took place on the Wild power play was a hip check by Hunt on Aho that drew the ire of the home crowd.  It was a scrambling finish as Warren Foegele nearly cashed in late and Minnesota was only down by one, 2-1 going into the 1st intermission.

2nd Period Thoughts:  The Hurricanes had a great chance early as Joel Edmundson had a shot from the high slot that was steered aside by Stalock.  The ‘ZZ Top’ line had a great shift to put some pressure on Carolina but no shots were being sent on goal as the Wild were being a bit too fancy with the puck.  The Hurricanes would bottle the Wild up in its own end and a turnover near their own blueline by Suter turned into disaster as Teravainen sent a cross-ice pass to Aho for a one-timer that he blasted by Stalock.  3-1 Hurricanes.  After some chaotic end-to-end action as Teravainen missed high and wide the Wild would counter attack and it was Zuccarello found the back of the net with a nice wrist shot that beat Mrazek.  3-2 game.

#mnwild was getting into a bit of a track meet with #Hurricanes, with lots of back and forth. But on that shift, it worked out. Zuccarello kept the shot with Staal crashing the net and placed it right under Mrazek's right arm.

The game seemed to become more of a chess match as both clubs were wary of making a critical mistake.  Penalties would put that in threat as Fiala got tagged for high sticking.

Fiala takes a penalty. Wild back in this game but will need a big kill here against the fast, skilled Canes

The Hurricanes would cash in as they got Minnesota’s penalty killers moving as they set up Hamilton for a blast, and then moments after that it was Teravainen threaded a cross-ice pass to Aho for a redirection just underneath the crossbar that Stalock didn’t have a chance on.  4-1 Hurricanes.

Dumba couldn't clear the rebound with Jordan Staal fending him off....Wild bigtime showing what the losses to Koivu and Spurgeon could do to this team tonight

Minnesota would go back on the power play with a trip by Wallmark on Zuccarello.  The Wild struggled to get set up in the offensive zone on the power play and Minnesota had a hard time dealing with Carolina’s puck pressure.  Minnesota came up empty with the man advantage and they’d try to press hard late with the ‘ZZ Top’ line as Zucker intercepted a pass in the slot and he’d let a hard wrist shot on goal that was absorbed by Mrazek.  Minnesota trailed by two going into the 2nd intermission.

3rd Period Thoughts:  The Hurricanes were content in defending their lead, working pucks deep and forcing Minnesota to carry the puck up the full length of the ice.  The first five minutes of the period, the Wild spent much of their time in the offensive zone.  This was accomplished by winning the battles along the boards, which is something they often struggle with. Also, we got some hard work along the blue line, which also helped maintain the offensive zone.  Even with this hard work, they’re not getting the shots on goal that they need.  We did see a new rule in play.  Carolina cleared the puck from past the center red line.  It wasn’t going to be icing, as the puck was on goal. Since Stalock froze the puck, the Wild were unable to change their skaters and Carolina was able to pick which faceoff dot they wanted.  I want to know who came with this pointless rule. It was not needed. This period has been slightly better, but at the midway point of the period, they are not applying enough pressure on goal.  Carolina is making it look easy to keep Minnesota out of prime scoring areas.  A clean draw by the Hurricanes in the Minnesota zone, Stalock would lose sight of the puck and blast from the bluline by Edmundson, which would further the scoring gap with over seven minutes remaining in the third period.  One thing the Wild keep trying to do in the offensive zone is to pass the puck in front of the net, however the puck keeps either getting intercepted or cleared away by a Carolina skater.  It’s hard to watch time and time again.  They should have figured out early on, that method isn’t going to work against this team.  What needs to happen is skaters need to skate with the puck and get shots on goal of their own and hope there’s someone there to snag the rebound. With just under three minutes remaining in regulation, Rask would get taken down along the boards in the Minnesota zone by Clark Bishop. With the ensuing power play and the offensive zone faceoff, Boudreau would pull Stalock for the extra skater.  Aho would get the hat trick with the empty net, shorthanded goal.  6-2 Carolina victory.

C – Alexander Khovanov (Moncton, QMJHL) ~ the skilled Russian received the good news where he is an invite for Russia’s entry for the World Junior Championships later this month.  Yet he’s not resting on that news as he had 3 helpers on 6 shots in Moncton’s 6-2 win over Victoriaville.  On Friday, he had 2 assists in the Wildcats’ 6-3 loss to Sherbrooke.  Khovanov has 19 goals, 50 points, 56 PIM’s and is +29 in 25 games.

G – Hunter Jones (Peterborough, OHL) ~ the big goaltender continues to be a wall for the Petes as he had 32 saves in the Petes’ 3-2 win over London on Thursday.  Jones has a 18-3 record, 2.60 goals against average and a .916% save percentage with 1 shutout.

RW – Nick Swaney (Minnesota-Duluth, NCHC) ~ the former Lakeville South star had a goal and an assist in Minnesota-Duluth’s 6-3 win over Nebraska-Omaha.  Swaney has 4 goals, 10 points, 2 PIM’s and is a -4 in 12 games.