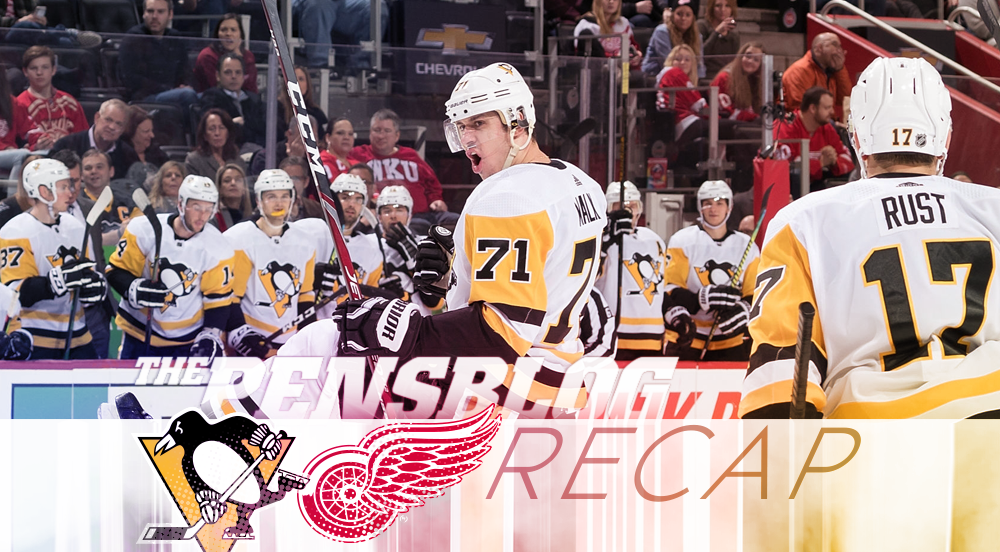 The Penguins finished the second of their weekend back-to-back last night in Detroit. The Redwings entered the game with an outstanding 0-9-1 record in their last ten games. The Penguins entered the game with back-to-back shutouts from Tristan Jarry. Mike Sullivan wisely made the decision to not play Jarry consecutive nights, because that would be stupid, and instead opted for Matt Murray. The Redwings, who are dealing with their own injury issues, iced a lineup that looks more like a game of “Guess Who” than an NHL roster. With Murray in and Andi Perelman’s sage trick working thus far, the Penguins iced identical rosters for consecutive games for the fourth time this season.

The only big change to the lineup was the deserved jump of Brandon Tanev from the fourth line to the second line. Mike Sullivan and Jacques Martin also seemed to notice what we pointed out in the recap, the Petterson-Ruhwedel pairing has been pretty good together so they opted to keep them together.

The puck was dropped to the roaring screams of 9 and we were underway. A bit of a shock rippled through my body when I remembered that the last time we cared about a game in Detroit was a decade ago. The Redwings did a few things early, but less than six minutes in it was Jake the Snake slithering his way to the goal crease and poking in the early lead.

The play was under review for a kicking motion and for goaltender interference neither of which were called on the ice and neither of which overturned the goal. Guentzel continues scoring goals in every way imaginable because he is a goal scorer regardless of his linemates. This was Guentzel’s 94th career goal in his 234th career game, as he prepares to become the 33rd player in Penguins history with 100 goals in the black and yella.

Following the goal, the Redwings started getting some possession and chances going their way but Murray was strong when he needed to be. The Penguins really adapted the Detroit lifestyle of freeloading around until a handout comes your way. After twelve minutes of back and forth, the top line got busy in the offensive zone, Malkin sends a puck to Ruhwedel at the point and he wastes no time firing it in on Bernier

Ruhwedel gets his first of the season. pic.twitter.com/a3jI7WWgC5

After a shaky start, which is mostly attributed to the rust accumulated from sitting for 20 straight games, Chad Ruhwedel is back to giving the Penguins solid defensive performances. This puck was tipped right in front of Bernier and I’m not 100% convinced that it wasn’t the tip of Guentzel’s blade, but so far the goal as stood as Ruhwedel’s.

Neither team would do much in the final two minutes as the Penguins closed out the first period of what looked like a possible trap game with a 2-0 lead.

No penalties in the first 20 minutes, the Redwings carried a slight advantage in scoring chances for at 15 to 14. Most of us exhaled deeply after Murray made his first save.

After getting off to an early lead the Penguins were primed to step off the gas and attempt to coast their way to victory. This strategy was disrupted five minutes in when Alex Galchenyuk took a tripping penalty. Less than a minute into the powerplay the Redwings scored to cut the lead in half.

Robby Fabbri gets his 7th goal of the season to get the Wings on the board!
2-1 Pittsburgh.#LGRW | FOX Sports Detroit/GO pic.twitter.com/EYXEq7YCwk

Murray was able to make the initial save but nobody was there to clean up the rebound and nobody was there to mark the eventual goalscorer. The Pens penalty kill has been on the downswing lately, and it’s usually getting beat when the opposing powerplay is entering the zone rather than once already established.

Here the Redwings just  entered the zone, nothing is out of place yet but watch what happens

Letang follows the puck carrier all the way to the corner, the problem is he has already dropped the pass back to Larkin. Jack Johnson was on the half boards as the Redwings entered the zone and was trying to get back. Suddenly you have both Penguin defenders in the right circle, not a good look.

You can see in the image above where this play is going.  All four Penguins are in this frame while only three of the five Redwings are, meaning there are two unmarked men that the Penguins at this moment don’t even know exist.

Larkin wisely cuts to the center and fires a shot that Murray saves, and the rebound defense looks like this:

Tanev, Johnson, and Letang are within 12 feet of each other while covering one Redwing. Had this rebound bounced the opposite direction there still would’ve been a wide-open offensive player.

With the penalty kill slipping and the powerplay in need of a serious penile implant, the Penguins have to make up for it with exquisite 5v5 play. Fortunately, they have often been the better team at even strength which has allowed them to keep afloat in the standings.

About four minutes after the Redwings goal the Pens had the puck in the offensive zone, and attempted clear was batted out of the air by Jake Guentzel right to Evgeni Malkin. Malkin told the world he would be fire with Sid out. Ladies and Gentlemen, Malkin is fire.

This play by Guentzel is just sick. It’s one of those that you know the potential play is there but the odds of pulling it off are super small, unless you’re Jake Guentzel. Plays like this are why the Penguins should go all-in on Taylor Hall, give Malkin an elite winger that gets him the puck. The goal was Malkin’s 399th of his career, putting him an even 40 behind Jaromir Jagr for third all-time as a Penguin.

Kris Letang celebrated the goal one minute later by taking a cross-checking penalty. Fortunately, the Penguins were able to kill this one off without any issues. The Pens would get an abbreviated powerplay chance of their own when Patrik Nemeth hooked Guentzel with 26 seconds left, and since it was a Penguins powerplay you know the period ended without another goal scored.

Up in shots.
Up in blocks.
Okay, faceoffs are pretty darn close.
Up in goals. pic.twitter.com/bV7VVmZtwD

The Redwings again carried the even-strength scoring chances in the period with 16 chances for and only 13 against as they put up 13 shots in the frame.

The Penguins frittered away the remaining 90 seconds of the powerplay, but right as it expired Dominik Kahun decided to put on a show. As Kahun carried the puck into the zone he attempts to make a pass but the puck refused to leave his stick, so he just abused Jonathan Bernier in a way he hasn’t seen since leaving Babcock.

The scoring line of the goal is Kahun from Marino and Pettersson. In the last calendar year, GMJR turned Daniel Sprong, Olli Maatta and a 6th round pick into the scoring line for this goal.  This shot is just filthy by Kahun, who is well on his way of surpassing the 13 goals he scored last year in his rookie season.

With the 4-1 lead, the Penguins just had to shut it down now. The Redwings had other plans however as some guy named Filip Hronek took advantage of no defense and scored at the 13-minute mark to make it 4-2.

Down but not out!
Dylan Larkin gives the Red Wings some life late in the third period.#LGRW pic.twitter.com/O4nGEzjFRN

Following that defensive breakdown, the penguins decided to give the Redwings another powerplay when Bryan Rust got his stick up high on Fabbri. The Redwings powerplay went to work taking advantage of a lacking in confidence Matt Muray and quickly made it a one-goal game.

Murray just looked completely unprepared for a shot here, and this puck has to be stopped. When Matt Murray is on top of his game, which was October, he is a good foot above the crease smothering this puck. Instead, look where Murray is for this shot:

Nothing a few reps with the goalie coach can’t fix, but there is no doubt Murray is lacking confidence right now.

Following the goals, the Redwings brought on a flurry, and in typical Matt Murray fashion, he goes from letting in an easy one to stopping Dylan Larkin flat out on a prime chance to tie the game. The Penguins would get a powerplay opportunity in the final minutes but the Redwings brought the house on them. There were some saves by Murray, a good block from Letang and some fortunate bounces that kept the game in the Pens favor. Finally, the Pens got it to their own zone and just started blasting slapshots toward the empty net until John Marino finally got one in.

And with this empty netter… MEATBALLS FOR ALL!

The goal bumped John Marino ahead of Kaapo Kakko in rookie scoring for the time being. No further goals were scored int he remaining 9 seconds.