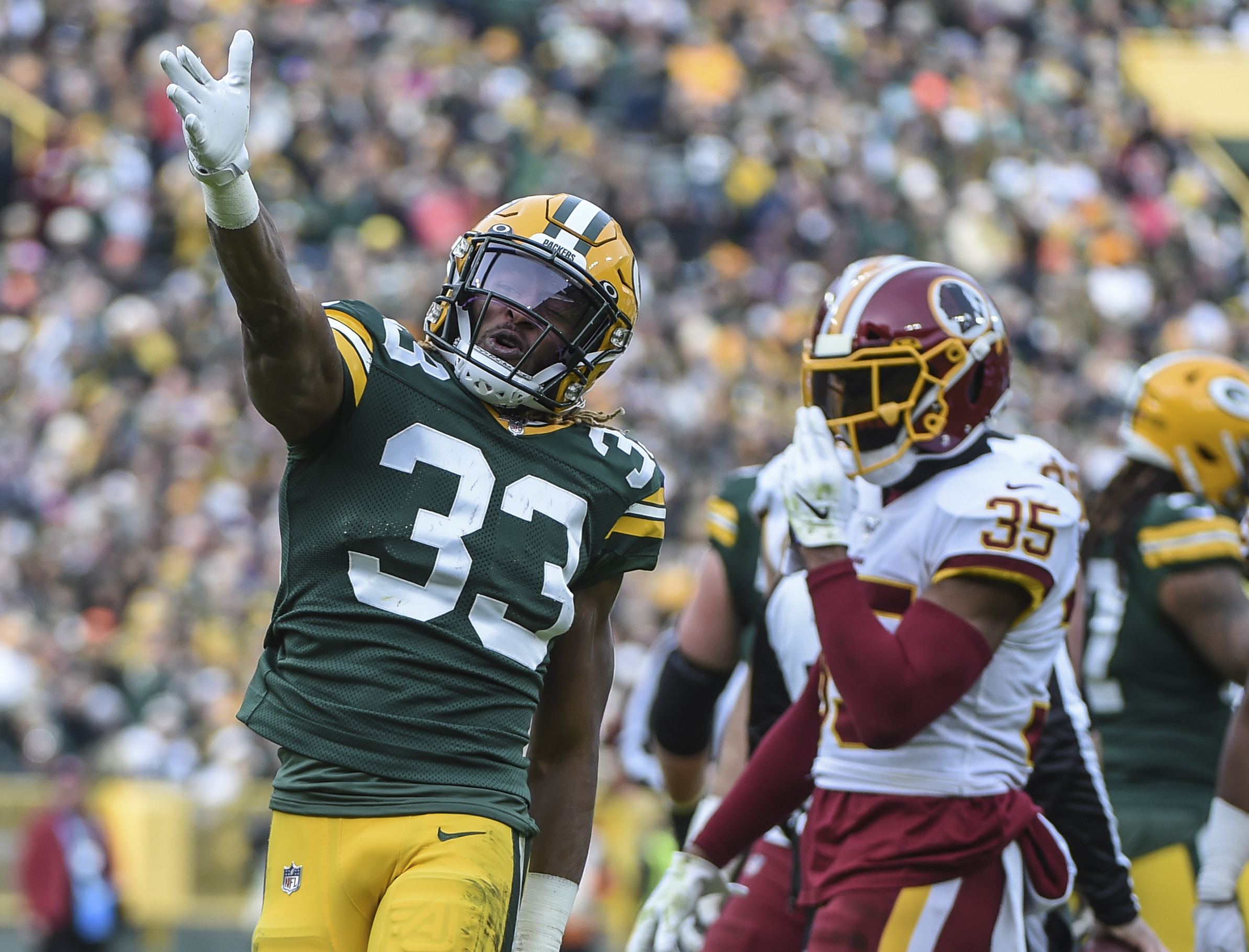 The Green Bay Packers won their second straight game over an NFC East opponent with a 20-15 victory over the Washington Redskins at Lambeau Field. The Packers now have a 10-3 record on the season and remain in first place in the NFC North with three games left on the schedule.

Aaron Jones ran for 134 yards and a touchdown and caught six passes for 58 more yards to lead the Packers attack. The Packers defense recorded four sacks and held Washington to 262 total yards for the game.

Here are 10 things we learned from the Packers win over the Redskins:

1. Aaron Jones Had His Best Game Since October

Running back Aaron Jones was the focal point of the Green Bay offense. He accounted for 192 total yards with 134 yards rushing on just 16 carries for an 8.4-yard average per carry. He also ran for a touchdown that put the Packers ahead 7-0 in the first quarter.

Overall, Jones totaled 192 yards for the game, just 70 yards left than the entire Redskins offense had for the game.

The Packers offense seems to be at its best when Jones is the focal point of the attack and his performance will be vital for the team down the stretch.

2. The Defense Held Up Against the Run

The Packers defense knew it had to stop the Washington running game to win and they did a good job throughout most of the contest. Adrian Peterson rushed for 76 yards in 20 carries for a 3.8-yard average. Peterson’s long run for the game was just 13 yards while Darrius Guice broke open a 23-yard dash before leaving the game due to injury in the second quarter.

The Packers were able to stop the Redskins from establishing a steady rushing attack until they fell behind in the second half.

Green Bay’s defense wasn’t spectacular against the run by any means, but they did their job and contained Washington’s biggest weapons and that was enough for a solid victory.

3. The Packers May Have Found a Punt Returner

The Packers have struggled all season on punt returns. In fact, entering this game against Washington, the team had minus-eight yards returning punts all season.

This week, the Pack signed former Jacksonville Jaguars return specialist Tyler Ervin. Ervin ran back four punts for 51 yards against the Redskins for a 12.8-yard average. His long return was 18 yards.

Ervin was quick and decisive, picking up the yards that were available to him before trying to make opponents miss to create a splash play.

Ervin’s strong game helped give the Packers good field position throughout the game, something that has been lacking for much of the season.

After the disastrous start the team had returning punts, this performance was a breath of fresh air for the Packers special teams.

4. Kenny Clark Had a Strong Effort

Defensive lineman Kenny Clark had a strong game for the Packers. The veteran nose tackle sacked quarterback Dwayne Haskins 1.5 times and got solid penetration against both the run and when pressuring the quarterback.

Both of Clark’s sacks against Washington came on third down and forced Washington to punt.

Clark was also a big reason for Green Bay’s solid play against the run and he was a big part of the defense this week.

5. The Tight Ends Were More Involved in the Passing Game

The Packers passing attack emphasized the tight ends more this week than they have in the past and they were successful in many ways.

Jimmy Graham caught three passes for 49 yards to lead Green Bay tight ends. He had a key reception on the team’s opening drive that helped set the tone for the offense.

Marcedes Lewis and Robert Tonyan had one catch each with Tonyan’s going for a 12-yard touchdown, his first of the season.

The Packers utilized several multiple tight end formations and used all four tight ends during this game. Rookie Jace Sternberger had his first target of the season but he was unable to haul in the throw from Rodgers which was a bit behind him on the play.

6. The Packers Did a Good Job of Containing Terry McLaurin

The Green Bay defense limited Redskins rookie wide receiver Terry McLaurin to four catches for 57 yards and a long pass of just 21 yards. Much of McLaurin’s production came late in the game when Washington was behind and hoping to desperately get back in the game.

Jaire Alexander didn’t always draw McLaurin in coverage, but when he did, he did a solid job of defending him.

Overall, the Packers didn’t let McLaurin break any big plays against them except for the late touchdown when the game was already out of reach.

The Packers wide receivers caught a total of seven balls on the game with four of those going to WR 1 Davante Adams. Adams managed 41 yards and had a long reception of just 15 yards in the game.

Meanwhile, Allen Lazard caught two passes on three targets and Geronimo Allison had one catch for 11 yards on his only target. Allison fumbled the ball away, but replays showed his knee was down prior to the fumble and the Packers retained possession.

Neither Jake Kumerow nor Marquez Valdes-Scantling had a pass thrown in their direction and neither was a factor in the offense.

Overall, the Green Bay passing offense looked out of synch for large portions of the game. On several occasions, Rodgers had lots of time to throw the football but couldn’t locate an open receiver.

Green Bay will need better production from their wide receivers if they hope to win games in December and January.

8. The Packers Lacked a Killer Instinct

Green Bay had a 14-0 lead after the first quarter but failed to put the game away when they had the chance.

The Packers never really were threatened, but they didn’t take control of the game against an inferior opponent when they had several chances to do so.

A more talented and experienced team than the Redskins may have been able to take full advantage of the Packers failure to finish off their opponents. This must be addressed in the coming weeks if the Packers hope to be contenders in the tough NFC.

Several Packers defenders had strong games. Blake Martinez again led the team with 10 total tackles. He also broke up a pass and put some pressure on Haskins on some blitzes. Several of Martinez’s tackles took place at or near the line of scrimmage.

Green Bay’s offense came out strong and when using Matt LaFleur’s scripted plays and the Pack took an early 14-0 lead. But then the offense sputtered, and Green Bay only kicked two field goals in the final 45 minutes of the game against a defense that doesn’t exactly resemble the Steel Curtain or the 1985 Bears.

Green Bay gained just 341 yards on offense, which was just enough to earn the victory but far below expectations against a 3-9 team at home.

The head coach agreed the team could have done more offensively. “Although we are definitely happy we won, I felt like we left a lot out there today,” LaFleur said. “We had a lot of short fields today and we didn’t capitalize on those. We have to look at the film critically and clean up whatever we have to clean up. We’ve got to get better.”