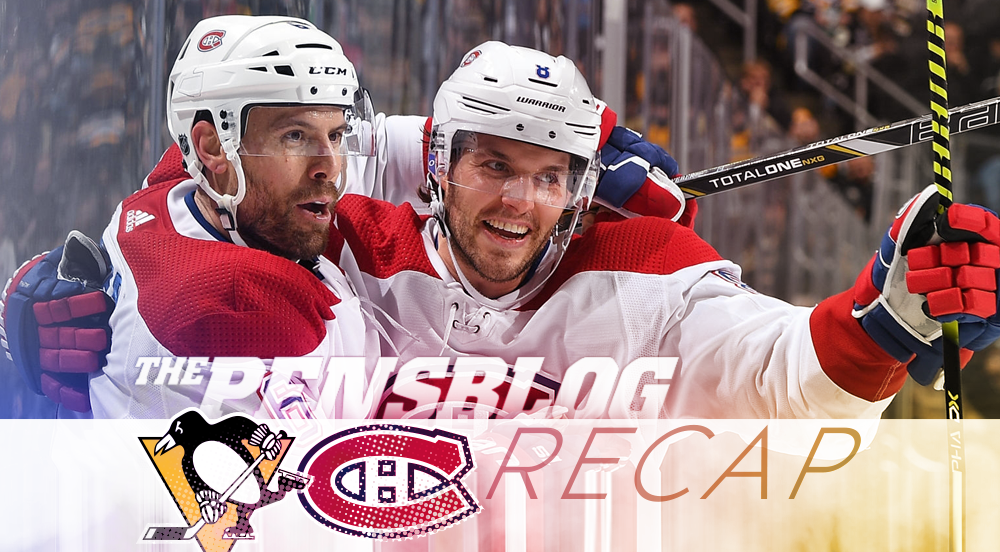 The Penguins welcomed the Montreal Canadiens into The Paint Can last night. Since their weekend back-to-back there hasn’t been a lot of news on the injury front, which meant the Penguins got to start the same roster for a third consecutive game, somebody call the police. Mike Sullivan decided to continue riding the hot hand in Tristan Jarry, which was the correct decision. With Jarry in net the lineup looked identical to Friday night except for Dom Simon switching places with Brandon Tanev. The majority of the responses to the following Tweet were a mixture of Star Wars gifs and complaints about Simon.

The period started off a little slow but after a couple stoppages in play in the first two minutes the Penguins finally caught themselves in transition, Bryan Rust broke in two-on-one with Jake Guentzel and Jake the Snake continued slithering up the goal column.

Of all the times we get mad that a player makes a pass instead of taking a shot this is not one of them, and not because they scored on the play. You can see how good Bryan Rust is by watching the blade of his stick in this gif. He starts with the puck on the toe and the whole blade facing Carey Price, selling shot and leaving Price with no option but to play for a potential shot. At the last second, Rust moves his wrist and flicks it to Guentzel and Price has no choice. Of course, if this was a Penguins goalie then he should’ve made the save.

The rest of the period was a little bit of this, a little bit of that, but nothing particularly great. Montreal took a delay of game penalty at the midpoint but the Penguins powerplay is in a bigger dry spell than you right now.

By the time the period was over, the Penguins had 15 scoring chances to the Canadiens 10 but only the Guentzel shot would get by Price.

Never tell me the odds (just the stats). pic.twitter.com/WwYRiarHof

The first half of the second period was identical to the second half of the first period. A few chances both ways but nothing particularly leave your seat worthy. A few minutes into the period Tristan Jarry set the Penguins franchise record for longest shutout streak, as he surpassed the man everyone forgets was needed to back up MAF during his tumultuous times

Tristan Jarry’s shutout streak, which was snapped at 177:15, is a new franchise record. He surpassed Tomas Vokoun's streak of 173:06 established from Mar. 22-Apr. 2, 2013. #LetsGoPens pic.twitter.com/ChjcKrGAcB

Shortly after setting this individual accolade, Jarry was faced with a penalty kill after Evgeni Malkin slashed Shea Weber. The penalty killers were on for a minute and twenty-four seconds of the kill before they failed to get a clear. Instead of sending the puck out of the zone the Pens got caught being fancy in transition in their own zone, turned the puck over, and it turns out odd-man breaks don’t care who is in goal.

Following the goal, Montreal started pushing the Penguins around a bit and the Pens didn’t have much of an answer. Three minutes after the tying goal Kris Letang can’t handle a bouncing puck at the blueline, and Joel Armia took advantage. Letang recovered about as much as he could without taking a penalty, Armia broke in closer and closer to goal and Tristan Jarry put all of his money on Armia making another move, leaving the glove side open.

It’s not often you see Kris Letang panic with the puck, but here he realizes Armia is pressuring him and takes an ill-advised whack at the puck in an attempt to bat it out of harm’s way and it backfires on him. People are irrationally upset about this play, I’m sure your percentage of batting bouncing pucks out of mid-air with an NHL forward barreling down on you is perfect. Much like Bryan Rust’s wrist movement on the Guentzel goal, Joel Armia sells Tristan Jarry with his wrists:

With the toe elevated here everything is telling Jarry that Armia is getting ready to pull this puck toward the center of the zone, as Jarry shifts accordingly Armia drops the blade and lifts it right over the glove.

The penguins looked to shake off the surprise that Montreal was winning but just couldn’t get anything going. During the final minute of the period, Shea Weber made the most of his contract by dancing around Letang and making Tristan Jarry look like a goalie without defensive help.

For starters, John Marino does everything right. He shields a shot from Weber while forcing him behind the net AND he doesn’t chase Weber behind the net. This is a veteran move by Marino, the Penguins defensemen were awful in this department last season and this was a welcome sight to see. Kris Letang took his assignment rather literally and followed him into the net to the point where he was too tangled up to cover Weber coming around the net. For some reason, it’s fun to blame Kris Letang when he gets scored on.

Less than 20 seconds left and a defender taking the puck behind the net. Everyone wants to get mad at Letang because he was in front of Jarry when the puck went in. Everyone should be getting mad at Bryan Rust and Jake Guentzel for not playing until the end of the period.

I know the cool thing to do is blame Kris Letang and Matt Murray for everything, but it’s tough to blame a guy for covering his man until the puck goes in while two forwards are just chilling.

The Habs would not score in the final 20 seconds and the period would end 3-1.

Ready to make a comeback in the 3rd period, we are. pic.twitter.com/bSOn5TvxpW

The Penguins came out firing in the third period but for the first time this century, Carey Price earned his 10 million dollar contract. By the time the period was over the Penguins would end up with 23 scoring chances for and only 6 against, but Carey Price wasn’t having it. The Habs would add an empty netter and that would do it.