Your Morning Dump...Where Jayson Tatum has his eyes peeled for an All-Star selection 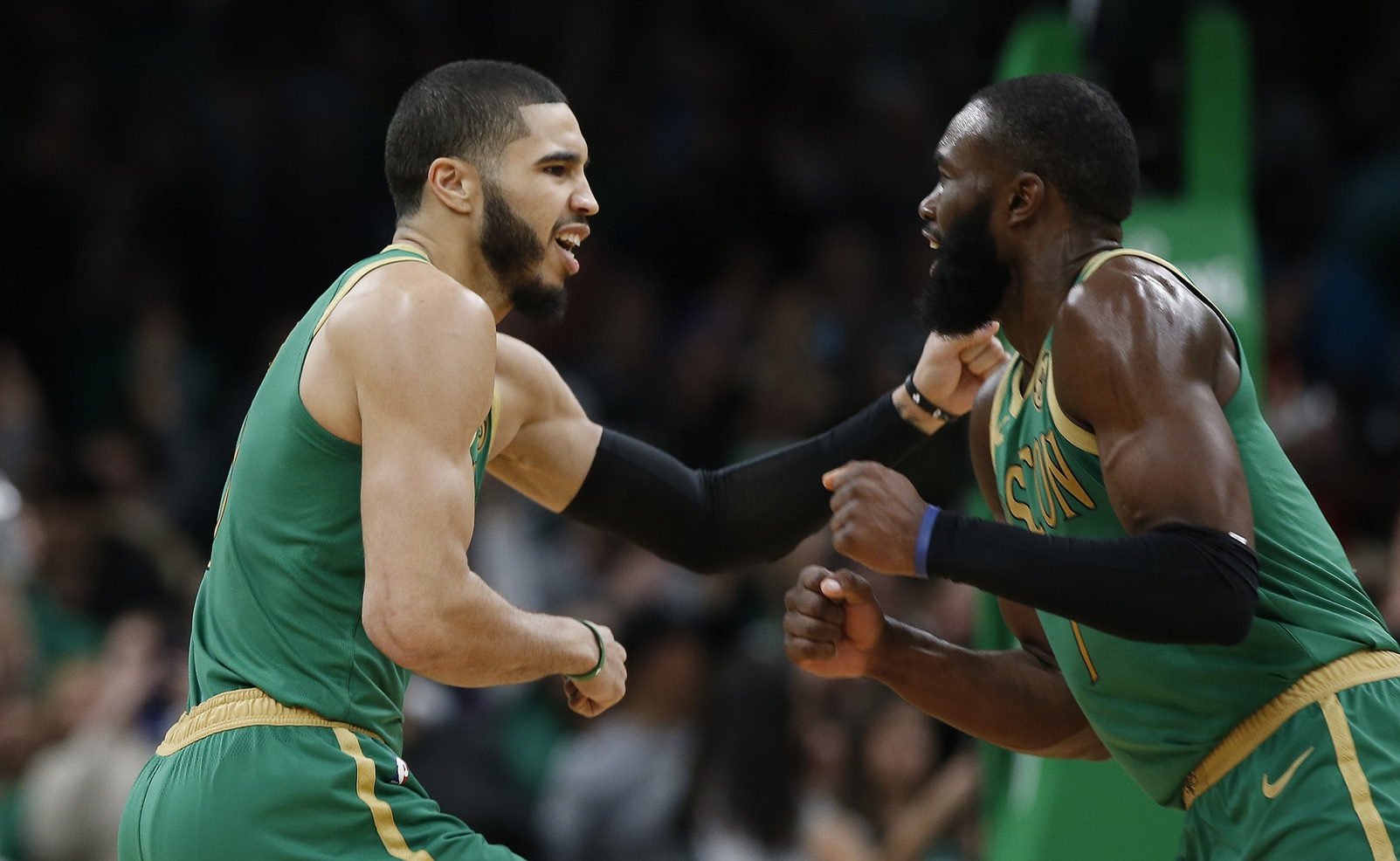 Your Morning Dump...Where Jayson Tatum has his eyes peeled for an All-Star selection

In the wake of a phenomenal rookie season that included a deep playoff run, cold-blooded shots, and a poster dunk over LeBron James, an All-Star selection in his second season was expected out of Jayson Tatum. After a year of frustration and a subpar sophomore campaign, Tatum is looking to redeem himself in year three.

“Obviously, I wanted to make it last year, and that didn’t happen,” Tatum said. “I was disappointed in myself, I didn’t play nearly good enough to make it, and that was tough. I thought about that the entire season and this summer”…“It’s a big deal,” Tatum said. “It’s only 24 people get to make the All-Star team every year. It’s not easy, it’s the best of the best. Even hearing that I have a chance to make it this year is good. I’m not going to relax until I hear that I do make it, but keep playing the way I am, keep winning, just let the rest take care of itself.”

Needless to say, he is determined to get there this season and it’s the first time we’ve really seen him locked in like this over an extended period of time. An issue with Tatum in his second season was a mix of a few different things. He didn’t take the right shots, he’d fade into the background if he wasn’t scoring, and he didn’t have that killer instinct he’s shown this season. Not to pile on him as it’s important to note that he still is only a spry 21 years of age, but he just didn’t have that edge last year. Whether it was the situation, coaching, or too much Kobe (I had to squeeze it in), something was different.

This year, however, we’ve seen it all on display from him and it’s been a pleasure to watch him blossom into a star.

Tatum certainly does have a chance. He’s averaging 21.2 points per game along with seven rebounds and 2.9 assists. His efficiency could rise (“Obviously I wish I was shooting it a little better,” Tatum said), but he’s posting career highs in points, rebounds, assists and steals.

What’s been the most impressive thing about Tatum other than his confidence has been the development of his all-around game. His vision has come so far and he’s made a concerted effort to be a factor on the glass and on defense. Being able to affect the game without scoring was one of his goals coming into the season and he’s reached that.

One thing that is going to have to improve is his efficiency. He’s shot just 41.5% from the field and has really struggled around the rim as he’s at 41.2% on layups. He’s never been an incredible scorer around the rim by any means but it’s a part of his game that’s going to have to come along if he wants to be considered one of the best in the game. Other than this efficiency, it’s tough to point out any area where he’s struggled. It’s a testament to the work he’s put in and how far he’s come.

Lastly, he’s taken it upon himself to be a leader on this team and he’s never afraid of the moment. Whether it is his performance against the Bucks, his game-winner versus the Knicks, or even his performance against Denver on Friday, the man is a gamer. He’s reached the point where when he takes a shot, no matter what it is, I think it’s earmarked for the bottom of the cup.

It’s going to be a tough field and while Tatum isn’t a shoo-in by any means, he has a great shot, especially if his Celtics keep racking up wins. Then to top it all off, he’s been having fun with it all as this year’s been a change from last year:

“It’s been easy this year,” Tatum said. “It’s just all been flowing in the right direction. Making the right play, being aggressive and doing what I need to do to help our team win, and we’ve been winning. So that helps a lot.”

Page 2: Where the Celtics have a big test coming up

Perhaps there was a reason Brad Stevens gave his team the entire coming weekend off. He knows how difficult the next two games will be as the Celtics face two of their Eastern Conference peers in a back-to-back set.

First is Wednesday’s game against the Indiana Pacers at Bankers Life Fieldhouse against a Pacers team off to a solid start without All-Star guard Victor Oladipo, who remains out recovering from knee surgery. Then Philadelphia comes to TD Garden on Thursday night. After the 76ers game, the Celtics are off for five days.

You don’t get many tests like this on back to back nights during an NBA season but the Celtics get going with that tonight. After getting swept in the first round last season the Pacers have to be chomping at the bit for a win. The Celtics are no different as they look to keep themselves in striking distance of the Bucks and begin to distance themselves from the rest of the East.

This isn’t the same Pacers team as last season as they retooled a bit and added Malcolm Brogdon in the offseason while moving on from Bojan Bogdanovic and Wesley Matthews. In his first season as a featured option, Brogdon has shined. He’s averaged 19.1 ppg 4.7 rpg and 7.5 apg on 47.3/34.5/92.6 shooting split. He was always a Celtic killer in his time with the Bucks and the Celtics are really going to have to key-in on him tonight. They’ll also get a test down low as both Domantas Sabonis (18.4 ppg and 13.5 rpg) and Myles Turner (2.4 bpg) have been huge factors down low.

After a do-si-do with the Pacers, the Celtics hightail it out of there for a date at TD Garden with the hated Sixers. We all know what happened the first time these teams met and the Celtics have to be hungry for some revenge on their home court. It also marks the return of Al Horford to Boston in what will be an interesting scene considering the veteran made his way to a team rival in the offseason. I’d expect a mixed reception for him but a positive one overall.

The Sixers are finally fully healthy and they haven’t really come out of the gate as they’d like to as they sit at 18-7. They were supposed to hit the ground running this season and they’ve had some issues early on. They’ll be hungry coming in on Thursday night and I’d expect them to be fired up for another matchup with the Celtics.

One cause for concern as always is Joel Embiid (22 ppg and 12.4 rpg). He regularly is a handful for the Celtics and the frontcourt is going to get all they can handle the next couple of days. Other than Embiid, ball movement is something Philly excels at and Ben Simmons has been dropping dimes at a clip of 8.4 per game. They’re always a tough matchup with their size/willingness to move the basketball and I expect them to give the Celtics all they can Thursday night.

While the Celtics feel confident and are looking to take both of these before a mini-vacation, it won’t be easy, and they’re going to have to play some of their best basketball if they’re going to box up a couple of wins.

Boston Sports Journal: Why the future of the Grizzlies’ pick is so murky

Boston Globe: A suitor will soon come for Kevin Love