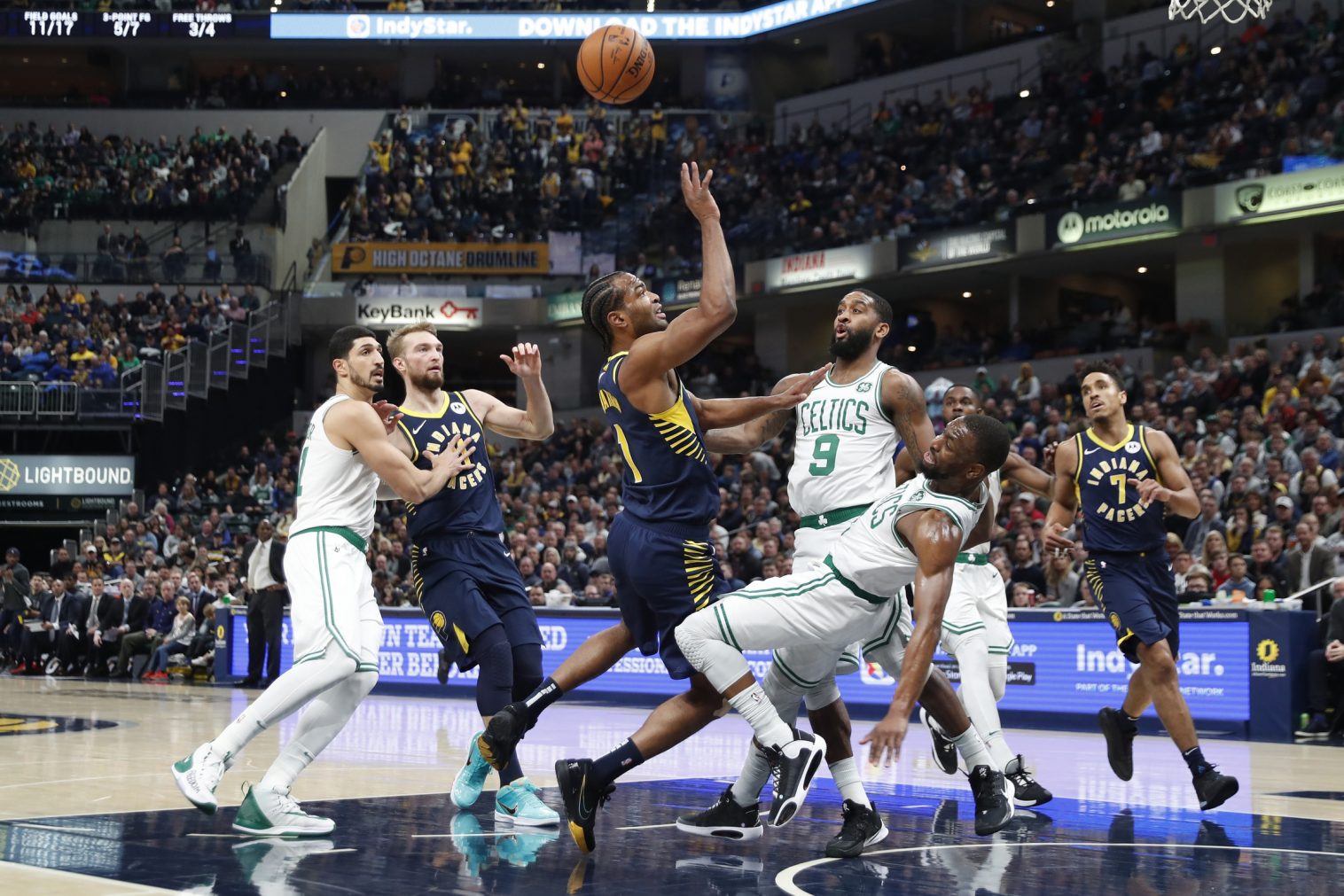 That sucked. WELL LET’S GET GRANULAR:

There was a considerable f**king foul disparity.
No way to deny this. Malcolm Brogdon is good at drawing contact and getting to the stripe, but he ain’t no James Harden, and…

All told, the Celtics were called for 27 fouls as opposed to Indiana’s 18. Daniel Theis is many things, not all of them great, but a bull-in-a-China-shop player is not one of them, and for him to get hit with four personals in the first half takes…a very liberal approach to what is and isn’t a foul, to say the least.

But I can be a good sport about this stuff usually…except when it pertains to people getting hurt. Which brings me to:

The no-call on Hayward’s injury and Wanamaker’s layup helped cost the Cs the game…
Believe me, I’ll get to what the Celtics did wrong soon enough. Yet in what universe does it make sense that Doug McDermott doesn’t get a foul call for this?

I don’t even think McDermott did it on purpose; I think he’s a gangly, awkward defender who made an irresponsible defensive play—not unlike our old friend Kelly Olynyk, who similarly screwed up a Kevin Love defensive assignment but with far worse results. (As a sidebar, while last night it appeared Hayward might be experiencing concussion symptoms, doctors ultimately cleared him of that possibility.)

The real issue is below:

Just beyond insane to me that Theis hitting someone in the arm gets reviewed for a flagrant but Hayward getting his face caved in doesn't. Like what are we doing here?

Like, why was Theis’s contact against McDermott (which was too incidental/nonviolent to be reactionary?) not only a foul but a potential flagrant-1? Doesn’t make much sense.

Then, when Brad Wanamaker passed through about 16 defenders to get to the hole for a much-needed layup, nothing doing. Real annoying.

Tough non-call on that Brad Wanamaker layup. Pretty clearly whacked on the arm. Would have sent him to the line with a chance to tie. Instead, Boston has to foul.

BUT there was also bad decision-making on multiple levels, from defense to lineup construction.
In the recap, I noted (or, more precisely, other smarter people noted, and I quoted) that Boston’s defense left much to be desired for large stretches of the contest. As it happens, it wasn’t horrid overall—for example, both Myles Turner and Domantas Sabonis shot poorly—but the guards Brogdon and Holiday had carte blanche to reach the charity stripe and get pretty much anywhere else they wanted. Indiana also took a page from the Boston playbook and forced turnovers as often as possible.

Stevens’ decision to start the second and fourth quarters with some weird gangs of dudes also led to wild Indiana runs and blown leads. Particularly this one in Q4:

Stevens lost it at the beginning of the quarter with that lineup. Ten point lead thrown away

For the record that was Kanter, Tatum, Wanamaker, Javonte Green and Semi Ojeleye. What. The. Hell. Moreover, Tatum racked up the three turnovers early in Q4 that arguably did the most damage within the stretch. Hopefully we’ve come to the part of the season where Brad stops experimenting. It’s become clear that “Tatum + bench” is far from infallible.

The non-Wanamaker bench was nonexistent.
Wanamaker continued his run of strong backup play last night…well, aside from his three turnovers. But he was the only reliable bench scorer: Beyond his 12, there were a combined 7 points between Kanter and Carsen Edwards. Everyone else goose-egged and mostly didn’t even try to shoot.

At least let’s celebrate the Kemba game.
That was pretty tight, right?

Kemba Walker dropped a season-high 44 vs the Pacers on Wednesday. Here's a rewind of all his shots ⏪🏀☘️ pic.twitter.com/Exq59xdQCy

Walker, understandably, was nonplussed, given that no victory accompanied it. “It really don’t matter,” he told the media.