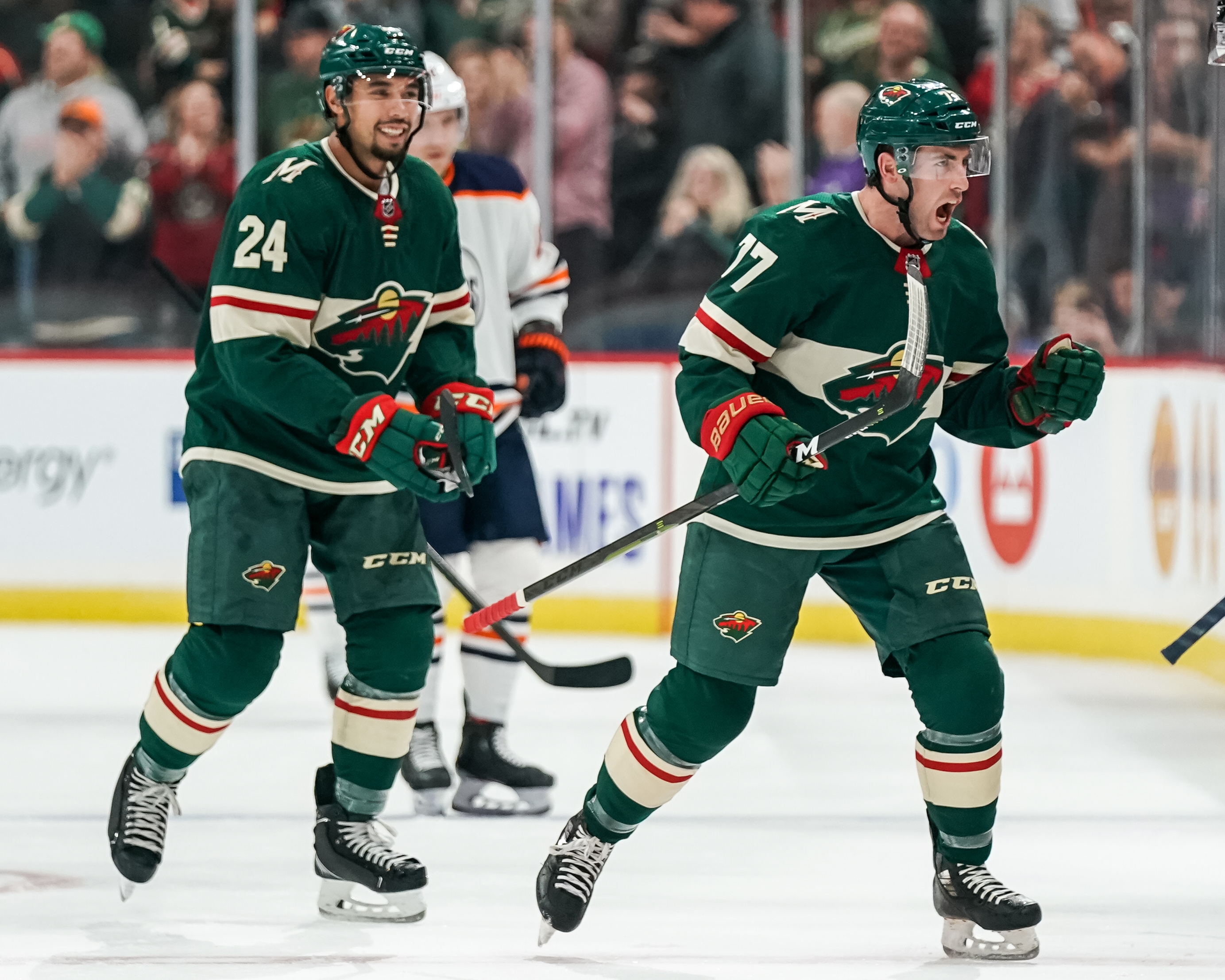 One of the things you learn as you become a hockey fan is the unwritten fan ettiquette during games.  From knowing when its ok to stand up and leave your row (i.e. during a stoppage in play) to applauding a successful penalty kill, there is lots to pay attention to.  Normally, among this seasoned group of hockey fans, they often lament at those who yell ‘shoot’ during power plays.  However, on Tuesday, I think even those seasoned hockey fans were probably yelling ‘shoot’ during a sad performance in a 4-on-3 power play in overtime against the Ducks where the team seemed to refuse to pull the trigger.  After the game, alternate captain Zach Parise suggested that the team may want to practice 4-on-3’s more often, much to the chagrin of Wild Head Coach Bruce Boudreau who felt well-seasoned experienced players should know what to do in that situation.

The 1st place Edmonton Oilers come to town to face a team that is piling up injuries and frustration just 2 games after having an 11-game point streak.  There is a fair chance they could be frustrated by the Oilers who are well coached squad who excels on special teams.  Can the Wild earn a win against the Oilers?

1st Period Thoughts:  With lots of empty seats visible on a frigid evening at the Xcel Energy Center, the pace of play was fairly cautious at the start.  James Neal would center a pass to a waiting Ethan Bear for a quick shot which was deflected up and into the netting above and behind the goal.  Minnesota’s first quality chance came off the stick of Ryan Donato who raced into the Edmonton zone and let go of a heavy shot that Mike Smith fought off.  Moments after that, a shot from the point by Brennan Menell was redirected on goal by Zach Parise that went off the side of the goal.  The Oilers would counter attack and Connor McDavid set up Zack Kassian for what looked like an easy tap in only to be denied by a toe save by Kahkonen.  Minnesota would have another great potential opportunity as Ryan Suter found some space but he waited too long to decide what to do and the puck was knocked off his stick before he could shoot or dish it to Mats Zuccarello.  The Oilers would break the stalemate as Sam Gagner found Oscar Klefbom all alone skating down the slot and he’d beat Kahkonen with ease.  1-0 Edmonton.  The Wild would try to counter attack with more of a forechecking game as they set up Brad Hunt for a point shot that Smith steered to the corner.  Minnesota had another terrific chance as Carson Soucy made a great pass to Luke Kunin who pushed a shot just wide, but Minnesota kept hustling and it was Soucy sending a shot on goal where the puck deflected off a body and fluttered into the air and behind Smith for a goal.  Jordan Greenway would get credit for the goal, but the puck may have hit him as he was screening Mike Smith on the play.  1-1 game.

Weird goal from the Wild here, Smith failed to catch it cleanly and it ended up it the net pic.twitter.com/Q7rZiXMek5

The Oilers tried to get their forecheck working in an effort to take back the lead.  Minnesota was taking any chance they could to fire shots on goal to keep testing a Mike Smith who is battling with his confidence the last few games.  The Oilers certainly wanted to test the Wild’s rookie goaltender and Adam Larsson nearly gave his team the lead as his point shot rang off the right post before Kahkonen was able to cover it up for a whistle.  Late in the period, a great outlet pass from Eric Staal finds Jason Zucker with a pass and he’d accelerate behind Bear and move in and beat Smith with a shootout-like forehand to backhand move as he roofs the finish on the breakaway.  2-1 Wild going into the 1st intermission.

2nd Period Thoughts:  Minnesota would give the Oilers a power play to start the period as Soucy was tagged for hooking.  The penalty proved costly as Leon Draisaitl worked a give and go as McDavid fed it back to the German-born winger who lifted a shot up and over the shoulder of Kahkonen.  2-2 game.

GOAL. Leon Draisaitl sneaks one past Kahkonen on the power play to tie the game.

A few shifts later the Wild’s 4th line would respond with a goal of their own as Victor Rask fed a pass up to Ryan Hartman who then dished it across to Marcus Foligno who rifled a shot by Smith.  3-2 Wild as Oilers’ bench boss Dave Tippett looked on in frustration at another soft-ish goal.

GOAL. Marcus Foligno scores to give the Wild the lead once again.

It was the 4th line’s 7th goal in the last 10 games.  Minnesota followed up with its GEEK line which went on the forecheck, causing some havoc in the offensive zone as they forced a few turnovers.  The 4th line would get another shift and as they tried to create another chance off the rush the Oilers stole the puck and counter attacked in a 2-on-1 between McDavid and Kassian.  McDavid tried to feed a saucer pass to Kassian which was denied by a diving play by Soucy.  Shortly after that, Soucy would make a long outlet pass to Donato who moved in and he blazed a heavy wrist shot by Smith to make it 4-2 Wild.

Beauty of a snipe from Ryan Donato pic.twitter.com/FpXKeDeepE

Tippett just shook his head as it was another unscreened goal given up by Smith and I was kind of surprised he didn’t pull him at this point in the game.  The next few minutes, the Wild were getting a little too cute with the puck and this lead to some foolish turnovers.  Darnell Nurse would level Luke Kunin with a big hit and the feisty winger slashed and chirped at the much bigger Oilers’ defenseman but they did not drop the gloves.  The physical play only continued to intensify as Foligno leveled Alex Chiasson with a big hit.  The next shift, Nurse would drop the gloves with Greenway and Nurse more than held his own against Greenway.  Even as Nurse’s mouth was full of blood he was chirping all the way to the penalty box.  I’d give the win to Nurse on the fight.  The Oilers appeared to want to open the game up and both clubs would exchange scoring chances off the rush.  Joel Eriksson Ek would take a holding penalty as he hauled down Draisaitl for an obvious call.  On the penalty kill, Carson Soucy would force a turnover and then pass a puck off the boards to Hartman who raced in on a partial breakaway where he was hooked after his initial shot to negate the Oilers power play.  Minnesota was careful 4-on-4 against Edmonton, biding its time to have a short 35-second long power play.  The Wild didn’t cash in on the man advantage but they did get the last shot as Kevin Fiala let go of a wrist shot that Smith fumbled but the puck would fall wide of the goal as the horn sounded.  4-2 Wild lead going into the 2nd intermission.

3rd Period Thoughts:  Minnesota looked focused and sharp to start the 3rd, working pucks deep and forcing Edmonton to spend precious time defending in their own end.  The Oilers wanted to turn on the pressure, but Kahkonen had good support in front of him as Minnesota tied up Edmonton’ forwards from being able to get 2nd chances off rebounds.  The Wild’s GEEK line again caused some havoc with some help from defenseman Soucy and Jonas Brodin who stepped up to hold the zone and keep Edmonton hemmed in its own end for about 45 seconds.  The Wild had good pressure on the Oilers’ puck carriers and they did a nice job of working pucks out of their own end.  Minnesota also took their opportunities to go on the attack as Fiala nearly lit the lamp in a shot taken off the rush that Smith was just able to close the 5-hole on.  The Oilers wasn’t going away just yet as a point shot by Larsson was redirected by Gaetan Haas and by Kahkonen.  4-3 Wild.  The Oilers kept on attacking and seemed to have the game-tying goal on the way when they made a play off the faceoff to give James Neal a breakaway but he was stonewalled by the Wild goalie.  But the Wild stopped moving their feet and the play started to resemble an extended power play for Edmonton as Bear sets up McDavid for a one-timer that he rifled by Kahkonen.  4-4 game.  After a few scary shifts where the Wild seemed to be flirting with disaster the ZZ Top line would respond with a goal as some fancy passing by Suter and Zucker’s no look backhand pass to Staal was one-timed by Smith.  5-4 Wild.

Minnesota would add to its lead on the next shift as the GEEK line cashed in as Eriksson Ek forced a turnover and Greenway gathered up the puck beneath the goal line and fed a pass out front for a quick shot by Kunin that Smith had no chance on.  6-4 Wild as Greenway nets a Gordie Howe Hat Trick.  The Oilers would pull Smith for an extra attacker and they would cut the Wild lead to one late as Neal roofs a backhander after a nice set up by Kassian.  Minnesota would lock it down the last 45 seconds to hold on for a 6-5 victory.

Let’s Play Hockey released their latest rankings and there has been some significant movement the last few weeks in both Class A and Class AA.  Here are the Top 10 rankings as of December 12th, 2019 for both Boys and Girls HS programs.