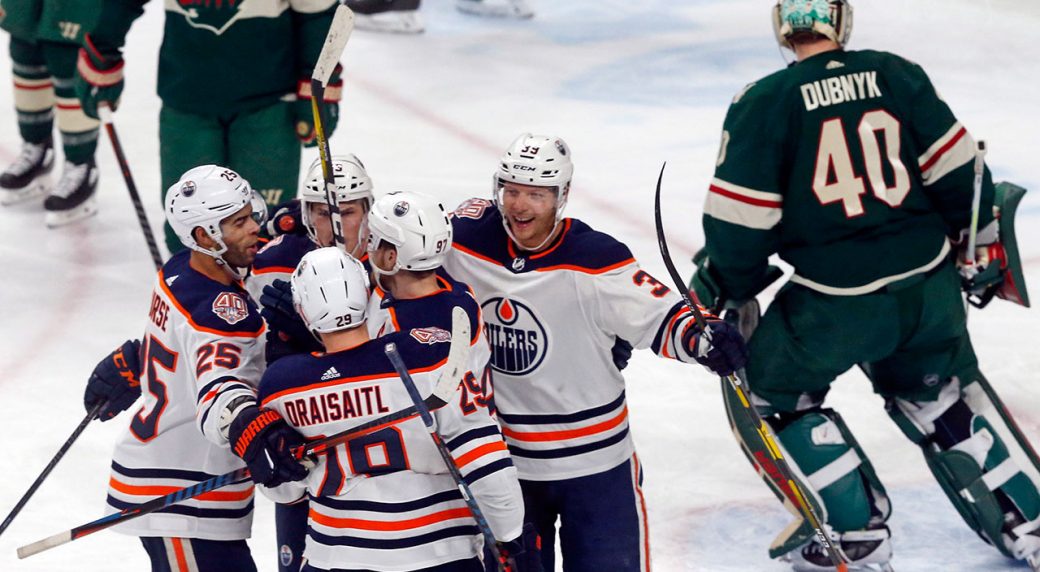 The Edmonton Oilers hit the road for a one-off trip to St. Paul to battle the Wild. It’s the second of three meetings between the sides this season, and the second and final meeting in Minnesota. The Oilers are struggling now, going 2-2-1 in their last five. That includes a 1-2-1 stretch on their recent home stand.

Thanks to Arizona’s loss on Tuesday, the Oilers are still tied for first place in the Pacific Division. They sit six points up on the playoff cut, ahead of the Vancouver Canucks.

Mike Smith gets the start for the Oilers, while Alex Stalock gets the nod for the Wild.

Edmonton: Commitment to 60 minutes. The Oilers, even in this recent stretch, have played some good hockey. The problem is, they don’t do it for 60 minutes. The Wild have played better recently, but they are banged up tonight. The Oilers have to have an attention to detail tonight if they want these two points.

Minnesota: Turn this into a slop-fest. With injury taking Eric Staal out of this game, the Wild don’t have a ton of skill in their forward group. They’ll need to clog up the neutral zone tonight and make this a more defensive, physical game. They have the necessary grit to play that kind of game.

Edmonton: Welcome to the Caleb Jones showcase event. Jones played well on Tuesday night and will remain in the lineup against the Wild. Sources indicate that while the Oilers feel more comfortable with Jones over Persson right now, they are also showcasing him for a potential trade. His performance tonight will be important for not just this game, but for potential forward help in the possibly near future.

Minnesota: Ryan Donato will center the top line for the Wild tonight, replacing the injured Staal. Acquired from the Bruins last winter, Donato has solid skills. Speed is a question mark here, however, and I’m not sure about his hockey IQ. He’s getting a great look against Edmonton and I’ll be curious to see how he handles it.

Brandon Manning will once again be scratched on defense, while Matt Benning remains on IR with a concussion. Markus Granlund and Patrick Russell will be the scratches from the forward group.

In addition to Staal, veteran center Mikko Koivu and defenseman Jared Spurgeon are on IR and will not play tonight for the Wild. Veteran defenseman Greg Pateryn is also out with injury.

This is the second of three meetings between the teams this season. They will conclude the series at Rogers Place in Edmonton on February 21st. The Wild claimed a 3-0 shutout victory over the Oilers on October 22nd. The win pushed Minnesota to 24-6-1 against the Oilers at home since 2007. The Oilers, however, have won two of their last five trips to St. Paul.

Edmonton’s powerplay continues to roll along at an elite level. They are still first in the league on the powerplay with a 31.6% success rate. Thanks to Ryan Nugent-Hopkins’ powerplay goal on Tuesday, the club has scored at least one goal on the man advantage in each of their last five games. The five-on-five offense simply must be better.