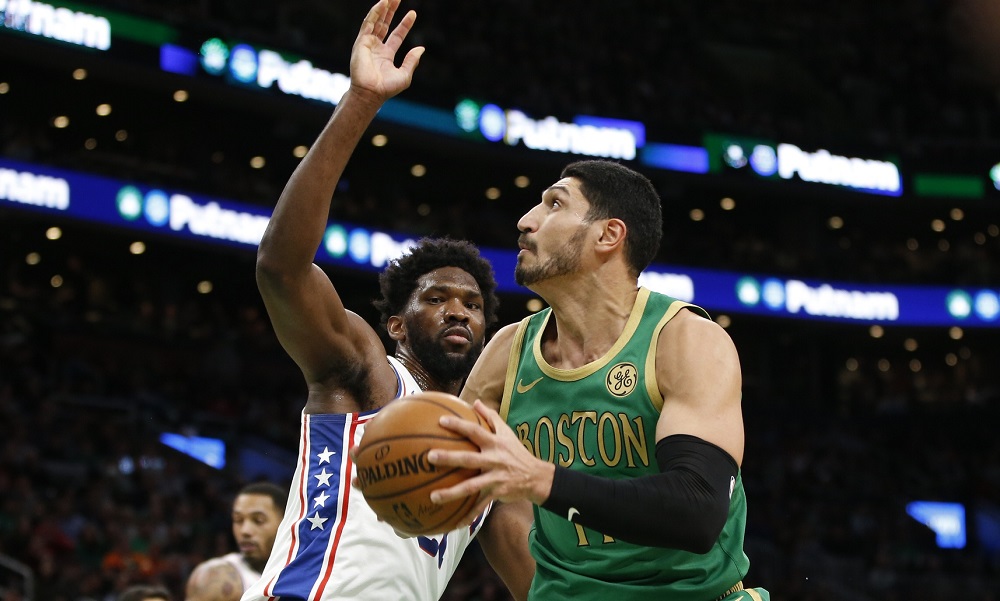 When Al Horford and Aron Baynes headed to other teams last summer, the Celtics were suddenly lacking size in the middle. One of the first thoughts many fans had was, who’s going to guard Joel Embiid?

We got an answer Thursday night: No one.

Daniel Theis and Enes Kanter gave it their best shot, but in the end, Embiid was the difference in Philadelphia’s 115-109 win at the Garden. The big man dominated with 38 points, 13 rebounds and 6 assists. He made 12-of-21 from the floor (2-of-3 threes) and 12-of-14 at the free throw line. Most important, he had 16 points in the fourth quarter, including a huge triple that put Philly in control in the final minutes.

Tobias Harris added 23 points for Philly. Boston was led by Kemba Walker’s 29 and 8 assists, but Jayson Tatum (15 points on 5-of-18 shooting) and Jaylen Brown (8 points, 3-of-9) did not bring it like they have recently.

Gordon Hayward recovered from Wednesday’s shot to the nose and was able to play, scoring 19, but Marcus Smart and Robert Williams were again sidelined.

This was the Celts’ first home loss of the season after winning 10 straight. Before we move on to the highlights, let’s get some Philly details out of the way.

First, Al Horford made his return to Boston but didn’t play due to knee and hamstring injuries. However, the Garden crowd showed him some well-deserved love. (No tribute video, however.)

Loud ovation for Al Horford as he's shown on the jumbotron pic.twitter.com/7JXeH4JeKE

Alhorford was as wonderful a person and player as you could have on your team. His influence on Marcus and Jaylen and Jayson will be felt for years. Thank you @Al_Horford

Second, Embiid did not deserve any love, nor did he receive it. (Brad Stevens challenged this foul call, and won.)

Mike Gorman is not impressed by the acting: “Look at Embiid, is he serious?”
😂 pic.twitter.com/dxmdwO3Mr6

The Celtics took an early lead and held it for most of the first half. They led by 6 after one quarter and 3 at the half – unfortunately, a Hayward three left his hand one-tenth of a second too late and didn’t count. Just like in Indiana, Kemba was on fire, with 21 points on 7-of-13 shooting. Embiid had 16 and Mike Scott (starting for Horford) had 12 (on 4-of-4 threes!) for Philly.

Another solid highlight from the second quarter was this late 4-point play thanks to Ben Simmons being unwise.

The Celts had a size disadvantage all night vs. Embiid, but on this play they overcame it.

The third quarter was back-and-forth, with five ties and seven lead changes. Hayward led Boston with 9 points in the quarter, but Harris had 10 to give Philly an 81-80 lead heading to the fourth.

Enes Kanter had his best game since joining the Celtics, 20 points on 10-of-13, plus 9 boards.

Kanter getting it done on both ends 💪 pic.twitter.com/G6wHTxhoFk

The score remained close until a 6-point Sixers run, capped by Embiid’s huge three, gave the visitors their largest lead to that point, 100-92 with 4:04 remaining.

When Josh Richardson hit a short jumper, the Sixers’ lead was 106-97 with 2:25 to play. But Kemba was fouled shooting a three and made ’em all, Kanter tipped in a rebound and Hayward drained a fallaway to close within 106-104.

Gordon cuts it to two! pic.twitter.com/axjMdG4rOZ

It was 108-106 when Stevens called for Hack-a-Ben. Unfortunately, Simmons – the career 58% free throw shooter who didn’t make much impact in the game – dropped in both with 34.6 seconds left.

Tatum had a clutch answer.

Tatum not had a good game, but man, his 3s this quarter have been huge.

That shot brought Boston within a single point, but Boston had to foul and Embiid sank two at the line. The Celts had one last chance that ended on this no-call (which my Twitter timeline unanimously described as “bleeping bullsh-t”).

After praising Tatum for those 3's, he made a bad mistake throwing that ball away. He neither ran the baseline nor called a timeout. Terrible mental mistake

Note to Jayson Tatum: you can run the baseline after a made FT

Wow. That was a really tough no-call. Richardson took Brown down.

Then Brown tried to give a foul on Thybulle and the official didn't call it.

Season high in points for both Kanter and Daniel Theis. Although Kemba was hot early, Matisse Thybulle’s defense helped hold him in check in the second half.

🔒 Kemba Walker held to 8 second-half points, only one FG (after 21 at half)

Two losses in the back-to-back leave the Celtics with a 17-7 record and five long days to wait for their next game, at Dallas next Wednesday.