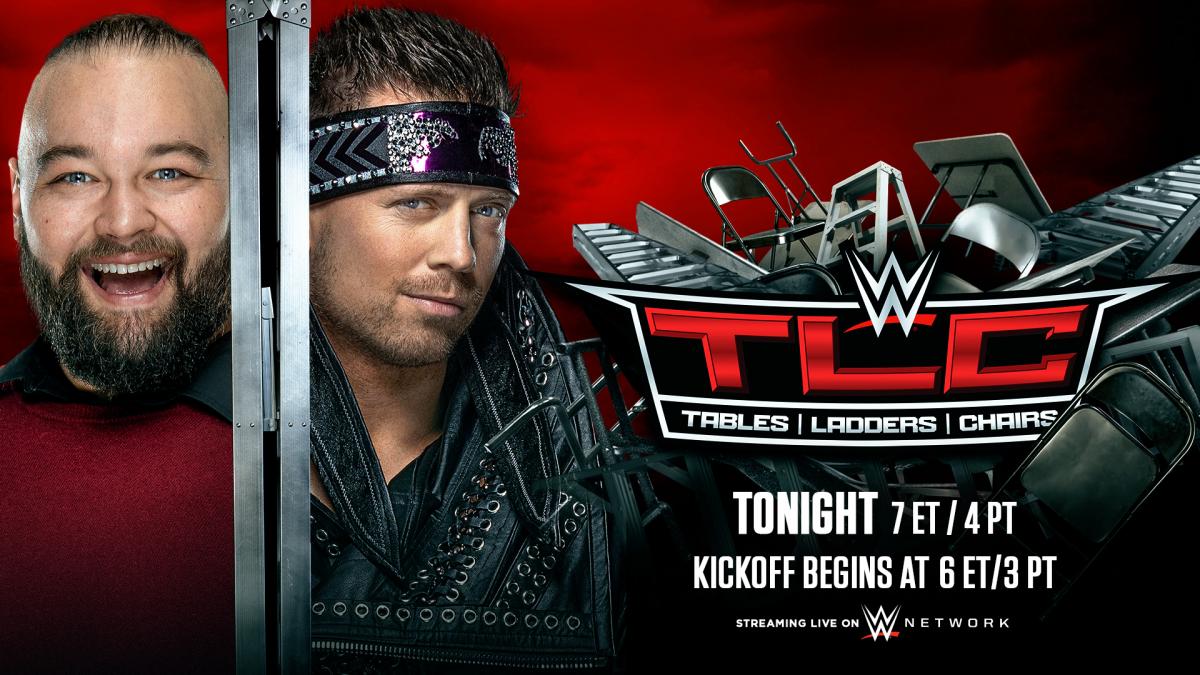 [lawrence-newsletter][lawrence-newsletter]TLC started off with champions The New Day in a ladder match against The Revival for the SmackDown championships.  The Revival take charge early by sending Big E over the announcer’s table and attacking Kofi with a ladder. Kofi, however, fought back by kicking a ladder to both Dawson and Wilder’s faces. After moving the ladder underneath the rope, Big E set up Wilder on the ladder. Big E tried to hit him with a big splash, but Dawson moved his partner out of the way. The Revival took advantage and set the ladder in the middle of the ring to go for the win. Big E comes for the save and knocks them down. Big E climbs the ladder, but Dawson drop-kicked him from the top rope. After many back and forth attempts, The Revival hit Kofi with the Shatter Machine. They climb to win the titles, but Big E hits them with a spear to stop them. Big E set up a second ladder next to the first in the ring. After taking care of Dawson, Big E brought in a third horizontally between the corner and a ladder. However, it backfired on him and Dawson suplexed him on the horizontal ladder. Wilder followed up with a big splash to Big E to drive him completely through. The Revival try to win, but is met by Kofi. They keep Kofi away, but Big E hit Wilder with the Big Ending from the ladder. Kofi comes to and knocks down Dawson in order to retain their championships.

King Corbin is asked if he is concerned to face Roman Reigns in a dangerous environment. Corbin says he has beaten Reigns mentally, but he will now beat him physically using tables, ladders, and chairs.

A video of the kickoff match between Humberto Carrillo and Andrade is shown. Carrillo picked up the win. Andrade and Zelina Vega seem to not be on the same page any longer.

Buddy Murphy and Aleister Black came next. After some back and forth action, Black’s nose got busted open. After sending Black to the outside, Murphy grabs Black’s vest. He tries to put it on, but Black kicks it out of his hand. Murphy fights through kicks and knees to the head and a moonsault. After hitting a second moonsault on the outside and a knee to the face to Murphy, Black tries to set him up on the top rope. Murphy fights back with several superkicks then a powerbomb. Black kicks out, rocking Murphy. He hits a knee and a brainbuster, but Black still kicks out. After a few more back and forth kicks, Aleister Black hits the Black Mass and that is it for Buddy Murphy.

Charly Caruso asks Rusev for his reaction to Bobby Lashley wanting to propose to Lana. Rusev says he’s happy because he wouldn’t have to pay alimony. He says Rusev is back and every day is Rusev Day.

A video of AOP and Seth Rollins beating down Kevin Owens from Monday Night Raw is shown.

The Viking Raiders issue an open challenge to any team to take them on for the Raw tag team titles. The OC, Gallows and Anderson, answer the challenge. They say they are the only tag team to ever defeat the Viking Raiders and are the best tag team in the world.

The Viking Raiders (c) vs. The OC end in a Double Count Out

After an exciting back and forth match, neither team were able to make it back to the ring and were counted out. The Viking Raiders put Karl Anderson through the KFC fan table.

Caruso asks The Miz backstage how his daughter was. He says she and his family are fine and now are in a safe location. The Miz says how he feels about facing Bray Wyatt is irrelevant. He says he isn’t fighting as a WWE superstar, but as a man protecting his family. He is willing to face anyone or anything.

Roman Reigns vs. King Corbin in a TLC match followed.

Corbin address the crowd after his entrance and says they need to show him respect. He says Roman will be forced to bend the knee to him, the king.

Roman fights Corbin on the outside. He drags Corbin back into the ring. Roman Reigns goes for the superman punch, but Corbin blocks. Corbin mocks Reigns as if going for a spear, but is blocked and runs into a chair set in the corner. Reigns hits the superman punch, but Corbin kicks out. Roman sets up a table in the ring. Corbin blocks by hitting him on the side of the head with a can of dog food. Corbin chokeslammed Reigns through the table, but Reigns still kicks out. Corbin sets up the announcer table, but Reigns sends Corbin through it instead with a Samoan drop.

Reigns sets up Corbin, but Dolph Ziggler shows up from underneath the ring to hit Reigns with a super kick. Corbin and Ziggler beats up a guy at ringside before grabbing another can of dog food and a chain. Reigns hits them both with a drive-by then grabs a kendo stick. He takes out Corbin’s security, but The Revival shows up and takes the kendo stick to Reigns. They roll him into the ring, but Reigns fights back with the Superman punch to both. He takes everyone out with a suicide dive, rolls Corbin into the ring, and sets him up. Ziggler throws a chair at Reigns and hits him with the Zig-Zag. The Revival hit him with the Shatter Machine then Corbin with the End of Days on a steel chair. Corbin gets the win.

The Miz battles Bray Wyatt up next on the show. Bray Wyatt comes out to the Firefly Funhouse music in his “Mister Rogers” getup.

Miz fires at Wyatt at the ring of the bell. Miz continues to attack, even though Wyatt shows no interest in any offense. The more Miz is on him, the more Wyatt laughs. Wyatt then goes for the Sister Abigail, but Miz counters. Wyatt continues to laugh at the pain. Bray Wyatt then rolls out of the ring and runs his own shoulder into the barricade. Miz runs after Wyatt, but is sent into the time keeper’s area. Wyatt’s expression changes and hits Miz with a Sister Abigail on the outside. He rolls in the ring, looking happy again. Miz beat the count at 9. However, Bray Wyatt goes back into the “trance” and hits Miz with another Sister Abigail. He gets the win.

Bray Wyatt defeated The Miz via the Sister Abigail

After the match, The Fiend is shown on the titan tron. Wyatt stares at it, says, “ok, I’ll do it” and grabs a giant mallet from under the ring. He inches toward Miz, but the arena goes dark. Wyatt screams that “he is here”, but when the lights return someone in a hoodie is there instead. The hooded man knocks down Wyatt with running knees. It is Daniel Bryan, with a haircut and shave. Bryan goes to hit Wyatt with the mallet, but the lights go out again. Wyatt is gone when they return and Daniel Bryan celebrates with the crowd with Yes! chants.

After a physical match, Bobby Lashley is able to put Rusev through a table with the help of Lana to win.

The Street Profits are shown backstage. They are trying to comment on the action so far, but the camera pans out to a brawl backstage.

The Kabuki Warriors defend their women’s tag titles in a TLC match. Asuka and Kairi are vicious against Charlotte and Becky from the get go. They hit them with a lot of things from chairs, ladders, kendo sticks, and a fire extinguisher. They tie Becky to a ladder with rope.

Charlotte tries to come in for the save, but Asuka hits her with a shining wizard. They throw her into the crowd. The Kabuki Warriors return to the ring to climb the ladder to win, but Charlotte appears with a kendo stick. She knocks them out of the ring. When Asuka tries to return, she knocks them with a ladder. Kairi gets thrown as well. Charlotte throws them into the barricade and goes to rescue Becky. Asuka stops her with a chair. Asuka and Kairi drive her into the staircase. Kairi tries to deliver the InSane Elbow to Becky, but Becky puts her knees up. She delivers a kick to Asuka and is able to wriggle free. Becky and Charlotte roll the Kabuki Warriors into the ring and sits them in chairs. They deliver big boots to them both. Charlotte sets up Asuka on a table outside while Becky climbs to the second rope. Becky delivers a massive leg drop to her through the table. The two, Charlotte and Becky, pick up Kairi try to double suplex her through a table, however she blocks it and delivers a a double DDT. Kairi sets up them both on a table and jumps on top. Charlotte moves, but Becky gets the hit. They don’t go completely through the table, but Kairi continues to try to keep Becky down. Charlotte runs over Kairi and powerbombs her through a table. Asuka comes from behind and hits Charlotte with a german suplex. Asuka buries Becky with a table and Charlotte with chairs and a ladder. She revives Kairi and they bring in a ladder to the ring and begin to set it up. However, Becky and Charlotte are able to fend them off from winning with chairs. Asuka throws Charlotte off the top rope into a table. Becky hits the Beck-sploder on Asuka. However, when she tried to go for the win, Asuka grabs the rope that is tied to the ladder to knock her over. Asuka then grabs the titles for the win.

For the second straight year, @WWEAsuka celebrates a top a ladder at #WWETLC…

The brawl from earlier makes its way to the crowd. Reigns spears Corbin and knocks down the mob to end the show.

THIS IS STILL GOING ON?!@WWERomanReigns just SPEARED King @BaronCorbinWWE into what seems like the entire ROSTER to close out #WWETLC! pic.twitter.com/ai9Y5qU3W5 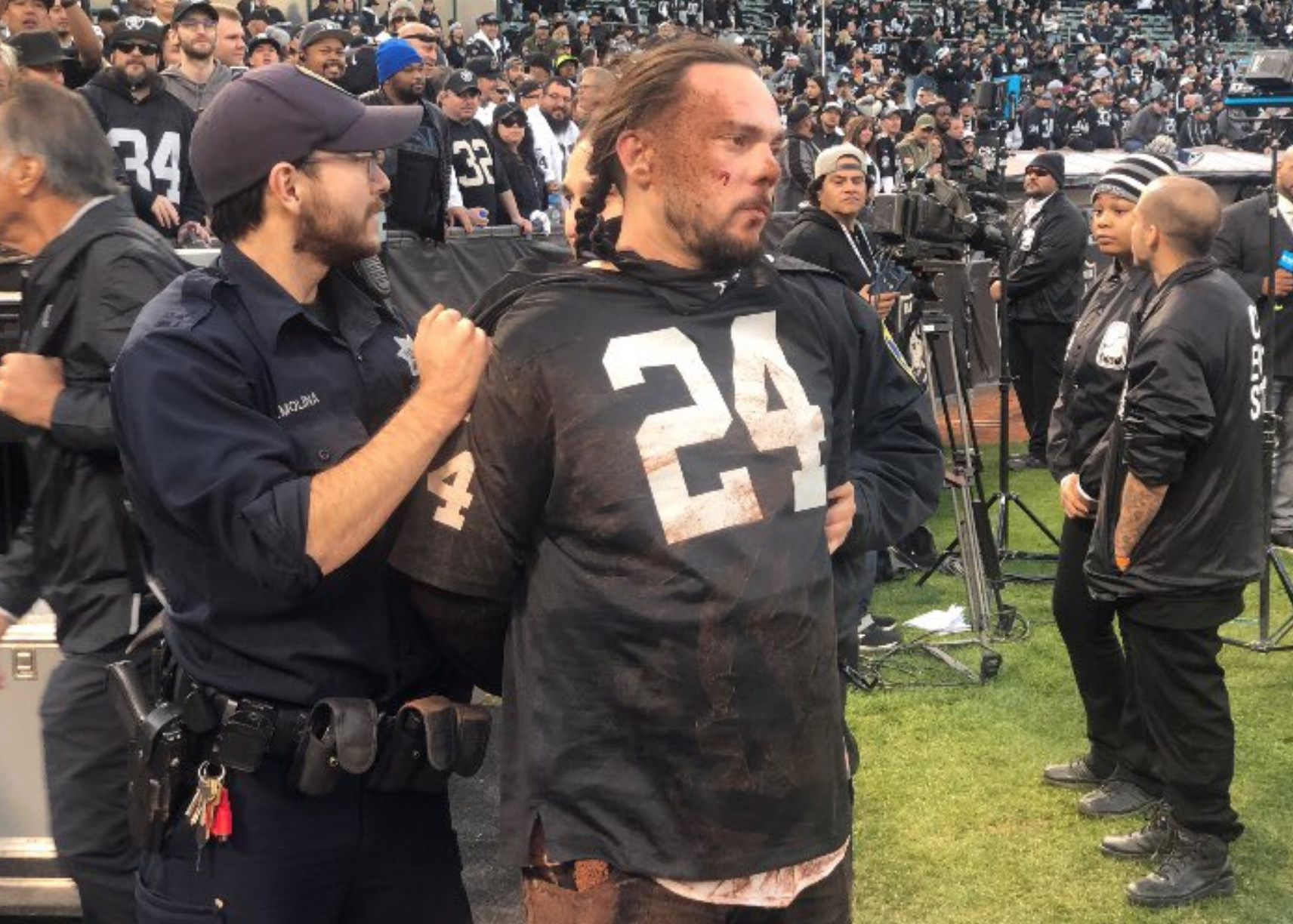 The Oakland Raiders had a 16-3 lead at halftime of Sunday’s game against the Jacksonville Jaguars, and fans were all in good spirits — enjoying...