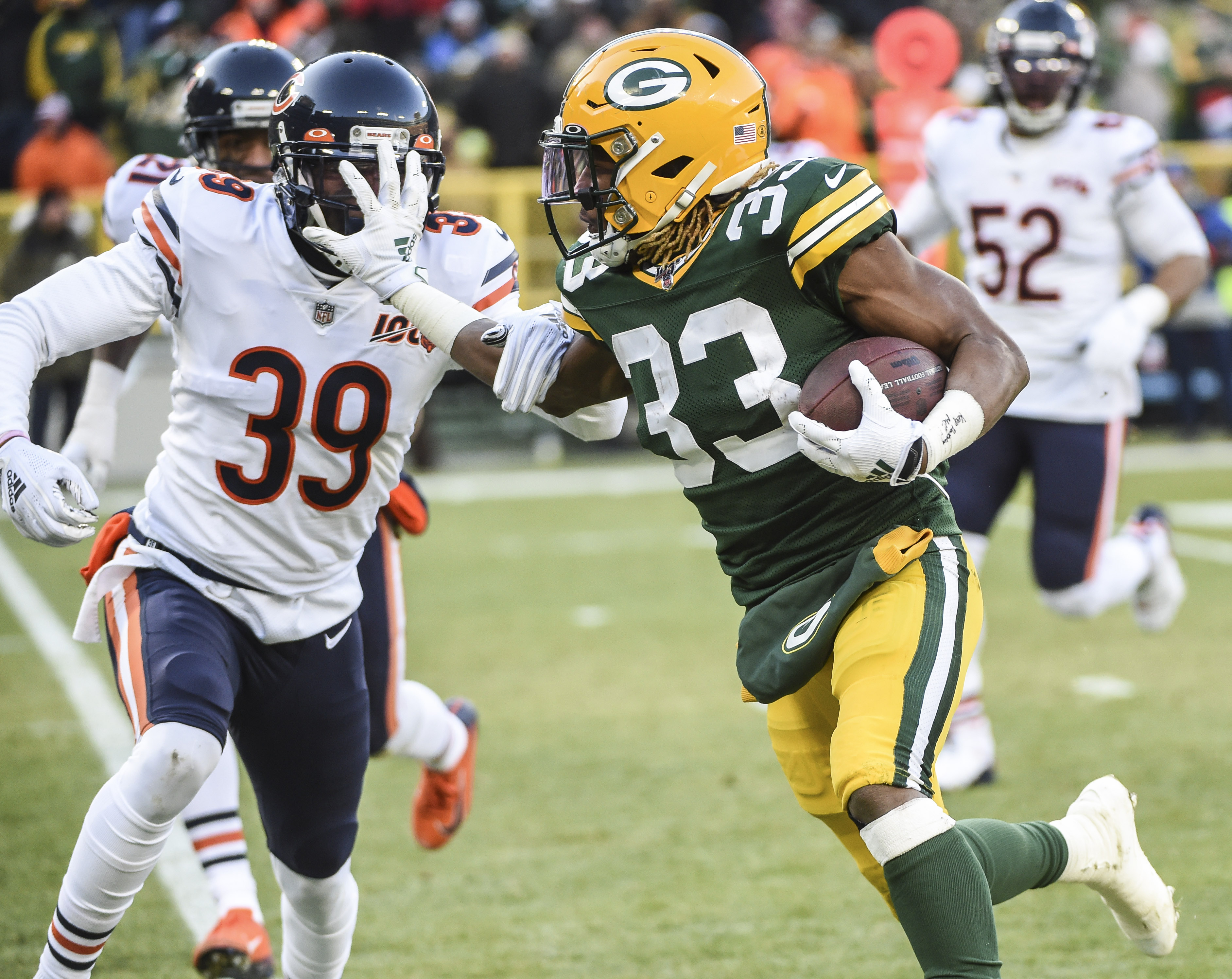 The Green Bay Packers won their third straight game with a 21-13 victory over the Chicago Bears at Lambeau Field. The Packers improved their record to 11-3 record on the season and remain in first place in the NFC North with a big showdown against Minnesota coming up next Monday night.

Aaron Jones ran a pair of touchdowns while Davante Adams made seven catches for 103 yards and a score to lead the Packers attack. The Packers defense held the Chicago offense in check until the fourth quarter when the Bears managed to make things close.

The victory plus the Rams loss to the Cowboys also clinched the Packers first trip to the playoffs in three years.

Here are 10 things we learned from the Packers win over the Bears:

1. The Packers Offensive Line Did a Very Good Job of Pass Blocking

Aaron Rodgers was sacked only once against a strong Bears defense. The Packers did a particularly good job of blocking Khalil Mack who got no pressure on Rodgers and made just one tackle all game.

The Bears tried to move Mack around to get better matchups but both Bryan Bulaga and David Bakhtiari were equal to the task and helped keep Mack in check.

Rodgers had time to throw for most of the game. The cold weather was probably a major reason he wasn’t more accurate and effective.

2. The Packers Offense Sticks to the Script

Green Bay’s offense moved the ball well when it stuck to its scripted plays. Early drives in each half led to touchdowns.

Unfortunately, the offense sputtered for most of the game with inaccurate passes, drops and a running game that never really got into any kind of rhythm.

The Packers offense finished with just 12 first downs total and 292 total yards in this game.

The cold weather and a good Bears defense made things tougher for the Green Bay offense, but they were not able to generate a consistent attack throughout this game.

3. Kenny Clark Is Back in Form

Defensive lineman Kenny Clark was a force throughout this game. He announced his presence on Chicago’s first drive, getting penetration and stopping Tarik Cohen for a three-yard loss on a running play.

Clark was his old disruptive self and finished the game with two sacks, eight total tackles, three tackles for loss and one quarterback hurry. This is the second straight game Clark has played back to his old Pro Bowl level.

The defense needs Clark to be at his best if they hope to play well enough to win big games. Today’s performance was a good sign for the Packers defense.

The Bears rushing attack was held in check for most of the game. They finished with 100 yards on 24 carries, but 29 of those yards came on scrambles by Mitch Trubisky. David Montgomery was the Bears leading rusher, but he averaged only 2.8-yards per carry on 14 tries. The Pack held Cohen to 28 yards on eight carries.

The Packers needed to make Trubisky beat them with his arm and by stuffing the run effectively, they were able to accomplish that goal.

Rodgers was very inconsistent. He finished the game by completing only 16-of-33 passes for 48.5 percent. He also took a critical sack that knocked the Packers out of field goal range with a chance to clinch the game late in the fourth quarter.

Rodgers didn’t manage the clock well before halftime either, costing the Packers a chance to add more points on the scoreboard.

The cold weather was definitely a factor, and the Bears have a great defense, but this was not vintage Aaron Rodgers, this was “Get the Job Done Somehow” Aaron Rodgers.

Marquez Valdes-Scantling has been almost invisible for the Packers after a strong first few games of the season. The second-year receiver started out the season with 16 catches in the first four games but has only two catches in the team’s last six games.

The very first play Matt LaFleur scripted was a long bomb to MVS on a post pattern and the play worked perfectly. Valdes-Scantling beat the coverage, the pass was delivered right where it had to be and…somehow it went right through the receivers’ outstretched hands.

That was the only target Valdes-Scantling got today and he was held without a catch for the fourth time in the last five contests.

It is certainly worthwhile for the Packers to try at least one long pass to MVS each game, but his role in the offense will remain miniscule unless he takes advantage of the few opportunities he receives.

7. Jake Kumerow Did His Job

Like MVS, Jake Kumerow has been relegated to the role of fourth or fifth receiver in this offense with the emergence of Allen Lazard. However, unlike Valdes-Scantling, Kumerow was able to take advantage of his one target in this game.

Kumerow made a key reception and made several tacklers miss on his way to a 49-yard gain to the Chicago 11. Two plays later, Aaron Jones ran for his second touchdown of the game from two yards out and the Packers held a 21-3 lead.

8. The Packers Got Pressure on the Quarterback Without the Smiths

The Packers recorded three sacks in this game and had four quarterback hits but neither Za’Darius nor Preston Smith recorded a sack (Za’Darius was credited with one hit). This marked only the third game this season that neither Smith Brother recorded a sack.

The Packers got pressure from Clark (two sacks and one quarterback hit), Rashan Gary (one sack and one hit) and were able to keep Trubisky off-balance until the Pack had a 21-3 lead.

The Smiths were by no means a non-factor, but it was good to see their defensive teammates picking up the slack in a rare game when neither Smith was constantly pressuring the quarterback.

The Packers return game had been a major problem all season until last week when the Pack signed Tyler “Swervin’ Ervin” off waivers. After a good showing last week that got the Packers punt return out of the red for the season, Ervin followed it up with another solid performance. He had one punt return for 12 yards and returned two kicks for a 35.5-yard average including a 45-yard return.

Ervin has given the Packers special teams a much-needed boost at the right time and this could be a very big factor in the future.

The Packers got critical defense plays from two role players who came up big when they got the chance. Defensive back Chandon Sullivan did a very good job of defending Bears wide receiver Anthony Miller on a fourth down pass by Trubisky. Sullivan helped angle the receiver out of bounds as he came down with the ball, causing the pass to be incomplete. The Packers took over on downs.

For the game, Sullivan had six total tackles and the pass defended.

Meanwhile, defensive lineman Dean Lowry came up with a key interception midway through the fourth quarter. The Bears had scored to make it a one-possession game and their offense was gaining momentum when Lowry managed to pull in a pass he bobbled a few times after blocking it at the line and scampered ahead for seven yards.

Both these players came up with big plays when the Packers needed them and contributed to the team’s victory over the Bears.